There is a street in my neighborhood that M.C. Escher would appreciate. Avenida Sirio intersects with this street four times on the right hand (west) side when you turn south on it from 22nd, four blocks in a row. I already knew this from the rare occasions when I have taken that particular back way home, and from the time, many years ago, when we were house-hunting and considered a home on one of the many pieces of Sirio. What I didn't know until today is that the street that crosses Sirio four times in rapid succession is also Avenida Sirio.

I don't know exactly how the street is laid out, or whether there's some minor variation of nomenclature that isn't reflected on the street signs as far as I can tell. I don't think I want to know. I prefer to think there is a minor space-time anomaly a mile from my house, to be passed through only by the one route known to be safe, past, so help me, the Young Explorers HQ.

For the first time in 15 years of voting in this precinct, unless I missed it in an off-year primary or bond issue, it was my polling place. 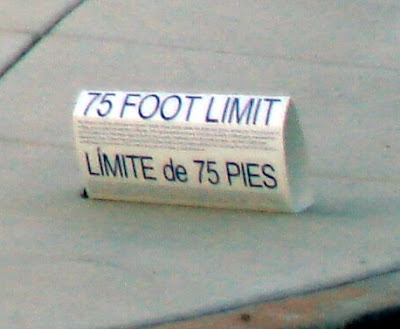 Outside Wheeler School in a previous primary
I had stopped at the local elementary school first, because I almost always vote there, at least on Election Day itself. Kids were getting out of school, and no election-related signs were up. Odds were that if the polling place wasn't that school, it was at the Assembly of God on Wilmot, or at the high school, or maybe, just maybe, at the bingo hall where I voted for Obama in the primary last year, the one with the address Google Maps insisted was north of Golf Links when it was actually half a mile south of Golf Links. Geography can be very strange around here, especially when I'm trying to vote! But on this occasion I went home and actually checked the Pima County Recorder's Office rather than guessing further, and made my way to 22nd and Sirio without falling off a map and into a wormhole.

The ballot is short this time, just Tucson City Council, one really bad proposition and several good ones. I went in expecting to vote for my Ward 6 Democrat, but there were three wards on the ballot. I had to ask whether I was supposed to vote in all three wards. I was. Should have remembered that from past elections!

Anyway, I'm safely from from that little adventure; and from replacing the dead battery on John's car, which I'd never driven before; from paying John's optometry and dental bills; and from issuing checks, meeting with Father Smith, helping Pat resolve a discrepancy in a deposit and sneaking into the church to listen to the substitute organist compose a new classical piece over at St. Michael's. And now, if my computer will just post this instead of crashing again as it did just now, I'll finish this entry and go read my Wrede novel.