It's 2:30 AM. About 45 minutes ago, I started preparing my Thanksgiving dinner. Sort of. Even more than in other years, it's all about the rutabagas. 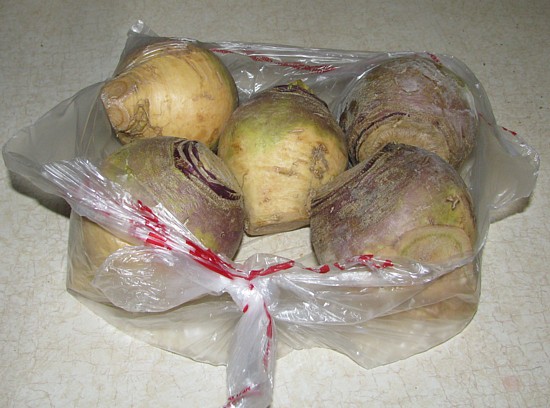 I've written about rutabagas several times before, in this blog and its predecessor. Basically they're a root vegetable similar to a turnip, sometimes called a "swede." When you peel and cook them they turn a pale orange, much like the lighter varieties of sweet potatoes. But these aren't sweet. If anything, they're kind of squash-like.

They are not at all my favorite vegetable, and I wouldn't want to eat them every week. But for nearly all my life I've been eating them at Thanksgiving and Christmas, if possible - which is to say, if my mom or I did the cooking. I serve them with the holiday meal, mashed with butter and milk - ack! I forgot to buy milk! I'll take care of that in the morning, I guess. I forgot the gravy, too, so I can get that while I'm at it.

Anyway, they're good with turkey gravy and all the rest of it, just another interesting flavor to go with other, more common elements of the traditional turkey dinner. Then the neat bit is, the next day you mix them with the leftover mashed potatoes, and make what my family used to call "turtatoes." 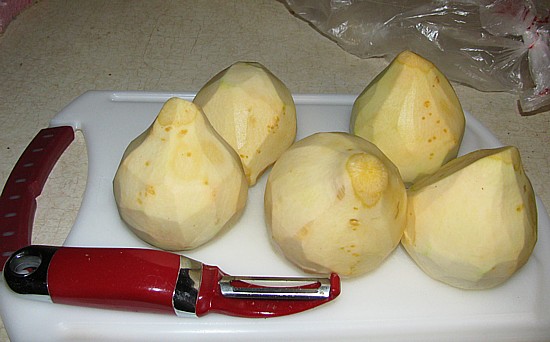 Not too many people I've met who never carried the name Funk are particularly familiar with rutabagas, so when I brought them to the Thanksgiving brunch at St. Michael's last year, I think I only cooked three of them. They were gone in ten minutes, and I had to move fast to save some aside for myself! So this year I'm cooking five of them. 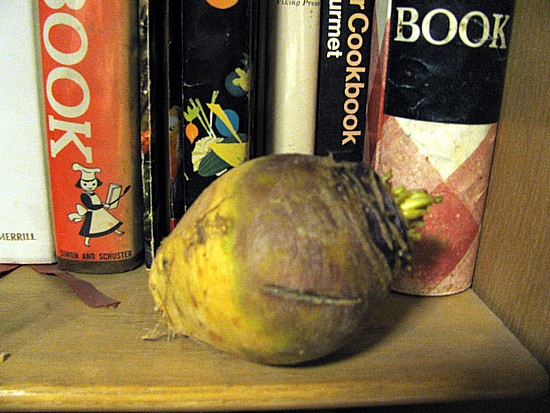 The ones I found at Safeway aren't the greatest. The color of the peel should be a little brighter, I think, and these were a little more blemished and scarred and hairy looking than usual. But they were a moderately decent size, and they peeled easily for once, and cutting them up wasn't as much of a struggle as it usually is. An hour into the cooking, which is where are right now, they seem to be almost soft enough to mash. Another 15 minutes, maybe.

And the rest of the meal?

Well, the immediate destination for my rutabagas is St. Michael's again, where the pot luck starts right after the 10:30 AM mass. My beloved atheist hermit husband John won't be attending that, nor will my friend S., although I did invite her. She has no family left that didn't basically abandon her, and I didn't want her to sit alone at Thanksgiving, thinking of her heartless ingrate son and the grandson she doesn't get to see anymore. But S., a Wiccan and former Christian with several denominations in her past, isn't comfortable going to a church, even just to eat at a communal meal. So my friend Kevin and I will take her a plate of vegetarian leftovers. Best we can do.

And my actual Thanksgiving dinner, with John? That's going to have to be at Boston Market. You see, our gas oven stopped lighting properly, or at all, months ago. So we currently only have the stovetop and the microwave to cook with. I'm not going to manage a turkey that way, and John doesn't even like turkey much. So, we go out! 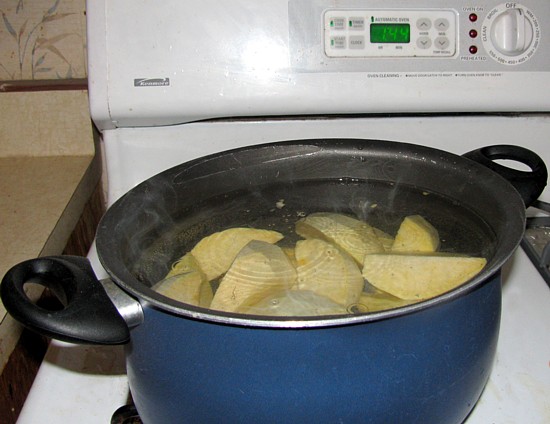 But Boston Market doesn't have rutabagas. No matter; I'm making my own.

(Click the word "rutabagas" in the labels below for more on rutabagas and how to prepare them.)

I've never heard of rutabagas as a traditional Thanksgiving dish, but I was surprised recently to learn of some of the strange things people eat on the holiday. I was also quite surprised to learn that not everyone eats sweet potatoes on Thanksgiving. In the South, it's not Thanksgiving if you don't have a sweet potato pie or casserole or just a plain side dish of yams.

I only eaten rutabagas a very few times and never acquired a taste for them. They taste kind of bitter to me.