Weekend Assignment #294: A Decade of Thanks

This week's Weekend Assignment finishes up one holiday-themed assignment and proposes another:

Weekend Assignment: #294: Thanksgiving is upon us, and it's traditional to ask what you're thankful for this year. But let's tweak that a bit. As we prepare to finish off the first decade of a new century, let's take a moment to appreciate the good things that have come about since 12/31/1999. What aspect of living in the 21st century are you most thankful about? I'm talking technology, medical breakthroughs, favorite tv shows, even people and pets born since the ball drop of nine years ago.

Extra Credit: What are you most looking forward to as the century continues?


For me, the choice comes down to social media or my two dogs. Which am I more thankful about, the big, world-changing, life-changing developments in online culture, or the fact that I personally have two dogs who bring me joy every day? Hmm. Let me explore that question for a moment.

Back in 1999, I was on AOL, hanging out on the SF and Fantasy writer's discussion boards. A few people were already writing what would come to be known as blogs, but I'd never heard of them. There was no Facebook, no Blogger, no Twitter, no Wikipedia. I'd never heard of John Scalzi, future blogger Carly of Berkeley, or dozens of other people who have since enriched my life with their words and pictures. But then came AOL Journals, and LiveJournal, and BlogSpot (remember when it was called that?), and other blogging platforms. Suddenly we all had new friends, around the country and around the world. Maybe we hadn't even actually met most of them, but they were friends nonetheless. Blogs in turn gave rise to microblogging, short bursts of self-expression on Twitter and elsewhere.

The next wave came in the form of social networking sites, when again redefined the word "friend." They were organized around virtual pins on virtual maps, around professional connections, around where you went to high school, around a common interest in films or gaming. Eventually the concept coalesced as the juggernaut Facebook, on which I spend far too much time these days.

Then there are the Wikis. Wikipedia was another obsession of mine for a while, and I still think I did some good work over there while the mania lasted. Today there are individual Wikis devoted to hundreds of subjects, from specific tv shows to legal or medical information.

Now, the question for me is, how grateful am I for all of that? I'm certainly grateful for the friends I've made, and the platform to publish my own words and pictures with nearly instant gratification. The downside, of course, is the way it can suck up my time, and the way the different social media compete for my time and interest. Is Facebook a step too far for me, considering its detrimental effect on my blogging output? Does it really matter? I'm not sure. Perhaps I would always been seduced by the next cool thing, whether it's a Zynga game or Gallifrey Base or YouTube. 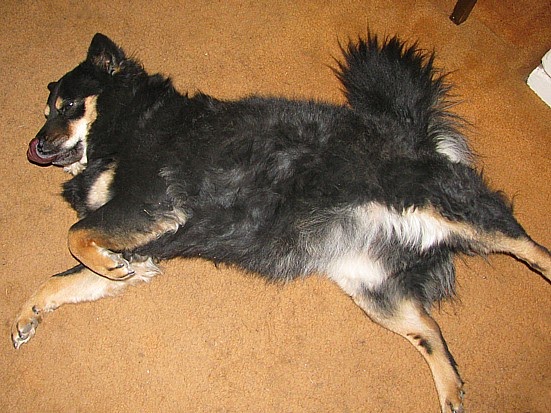 The impact of Cayenne and Pepper on my life is much more straightforward. Yes, I'm sometimes a little annoyed when Cayenne demands more petting, pressing her head into my hand or pawing me with her sharp claws. Yes, I get a little frustrated at Pepper's tendency to walk the other way when I call her, although she's not nearly as contrary as she was the first year we had her. But I spend a lot of time happily petting them, taking them on jaunts, trying to take pictures without flashing out their eyes.

Yeah. Overall, considering the drawbacks of the social media stuff, I think I'm most grateful for my dogs!

Oh, and on the hopes for the future thing? Well, first of all, I'm looking forward to being thankful for a permanent, full-time job that I enjoy, and where I'm appreciated. In the long term, I'm looking forward to medical breakthroughs in brain function. I still remember how devastated my dad was many years ago, when he tried to talk to his mother on the phone and she didn't know who he was. My dad's memory is actually pretty good these days for a man in his high 80s, but my mom at age 75 was falling apart rapidly. Even I, at a mere 52 years old, am starting to feel that my memory isn't as sharp as it was. The other day, Father Smith asked what a particular bill was for, and I told him that it was incense. Since the check paying the bill was for hundreds of dollars, we quickly concluded I'd made a mistake in issuing it. I told him to void the check and I'd redo it. But it was actually a payment for office supplies, and the dollar amount was right! I'd confused two vendors with short, nonsensical names. My mistake was hardly earth-shattering, but it worries me. I've relied on my memory all these years. Can I keep it functioning adequately while research continues on how to prevent and treat Alzheimer's and dementia? Oh, I hope so!

How about you? What great new person or thing of the 2000s are you especially thankful for? Tell us about it in your blog, or in the comments below. Easy instructions to participate are at the end of this entry, right after last week's wrap-up.

For Weekend Assignment #293: When Do the Holidays Begin?, I asked when you personally start celebrating the holidays. Click on the names below to read their full responses:


After the Thanksgiving holiday, I start thinking of Christmas. Anything before that is way to early to my way of thinking. Our city has already started putting up the holiday lights. They started putting them up right after Halloween.


Holidays begin for us all the way back in May. You see, there is a small rodeo parade here in the East Bay, which is held every Mother's Day weekend, and it is kinda the unofficial kick-off of summer, or at least it is for us. Two weeks later comes Memorial Day, and then my birthday and well, you get the idea. We don't really stop celebrating until January 1st. But if we are talking about the holidays... holidays... then I would have to say, they begin with Halloween.


It's hard to avoid thinking about the December shopping season, as much as I try. Of course, thinking about it isn't the same as actually getting into the whole holiday brouhaha. Some family members have to plan vacations and time off early, so in that respect we're thinking about family celebrations. I also try to think about gifts, but only because I'm always on the lookout for bargains.


When my sister and I were little, we used to start playing the Christmas records in August. My mother was far more patient with that nonsense than I would be. Now, if I start hearing holiday music before the end of November, it's "rushing the season." There's a lot of Christmas music that I actually like - I just don't want to listen to it, or sing it, until the calendar is edging into December. And I really don't want to walk into Target on Halloween - in the morning, before anyone's been out trick-or-treating yet - and see the Christmas-decoration department already set up in the "seasonal" corner of the store.


I'm not a huge fan of Christmas decorations going up in the stores right after Christmas. It has nothing to do with the fact that Thanksgiving isn't here yet, or that it contributes to the commercialization of Christmas. I don't care about that. I just hate that it makes me stressed out thinking I have less time to get presents. True, Jenn does most of the shopping now, but I'm a last minute shopper, so I don't want to think that last minute is here already. Does that make any sense?

Here are the guidelines if you'd like to participate in the Weekend Assignment:

People must be starting the holiday early, if I'm here first with five things I'm thankful for.

Happy Thanksgiving, Karen!
I managed to get in just under the wire! ;-)
http://www.barrettmanor.com/julie/archive.aspx?ID=2704