My suitcase is packed, more or less, and mere minutes from now I'll be driving to Los Angeles for the weekend. I'm already running a little behind, because after I picked up my rental car I had to go back to work to rush out a report due tomorrow morning. You know what happens if you stay too late in my building? Apparently you get locked in. There was a way out, but it required at least a mile's walk to get back to the rental car, because of fences and washes and things. 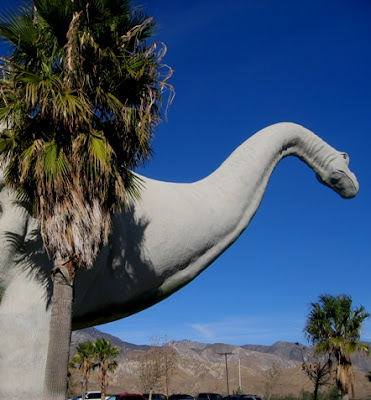 One of the dinosaurs of Cabezon, California
Still, the time has come: I'm getting the heck out of Tucson, ba kep och ma vere*, driving away in a nice new car with satellite radio. Which brings me to the new Weekend Assignment question:

Weekend Assignment #203: If you had the time, money, housesittter, etc. to pack up right now and drive somewhere out of town for a few days, where would you go, if anywhere? Note I said driving, so wherever you pick should be in driving distance.

Extra Credit: last time you got out of town for non-business reasons, what was your mode of transportation? 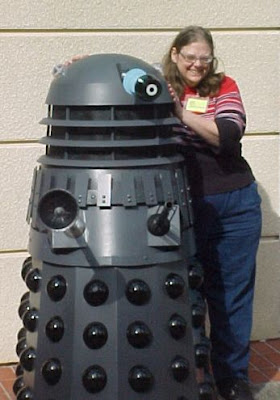 A Dalek and me at Gallifrey One, 2004.
Obviously my destination for this particular weekend is all set: I'm going to the Gallifrey One convention in Los Angeles, CA, there to consort with Daleks and Time Lords and other aliens - or, to be more accurate, people who have either written about such characters or played them on tv. In the first years of this convention my former writing partner and I used to interview such people, first for TARDIS Time Lore and then for Starlog, but this time I'm "a civilian," as John put it. I sure would love to interview Steven Moffat and Paul Cornell, though. They're two of my three favorite Doctor Who writers of all time, the third being Douglas Adams. Yes, that Douglas Adams.

But there are lots of other places in easy reach by car, and I don't get out of town nearly often enough. I'd love to go down to Bisbee, Arizona with John for the weekend. We'd stay one night at the historic Copper Queen hotel, another at a funky trailer park thing with a midcentury diner and themed coaches to stay in. We'd probably shoot for the Tiki-themed one. We could make a day trip from there to Tombstone, to see whether Morgan Earp still falls over with an audible clack at the Historama. And I say that with love, because Tombstone is a great little place.

I'm also dying to see Roswell, NM, not because I believe anything much happened there but because of all the kitch that's grown up because of what people think happened. Or to the Grand Canyon, to try out that new walkway. ride a mule and finally visit the North Rim (not this time of year, though).

Or we could just go to Disneyland for the 11th time or thereablouts. That works, too.

Your turn: here's $500 and a prepaid car rental. Where are you going? Write up the answer in your blog or journal, and leave a link in the comments to this entry. I'll be back in a week (assuming the Daleks don't get me) with a roundup of your answers.

Now, if you'll excuse me, it's time to pack up my laptop and hit the road!

*Loosely translates to "Get me the heck out of here!" From a scene I wrote over 30 years ago.

I know my answer to this assignment, but still in too much pain to form coherent thoughts. I'd go to Niagara Falls. Last time I traveled was by mini-van. That's about it. Now to go remind John I still need him to go to CVS and fill my script for pain meds...

Karen - Great topic! This is my first attempt at leaving a functioning link in the comments, courtesy of instructions left in the comments to one of my blog posts. So here goes:

sorry about that I am having trouble with my internet connection :(

Hope you are having fun in LA. Here is my road trip plan.

Here's my stab at the Weekend Assignment.

This was a fun assignment, because I think road trips are fun. Here's where I'm going.