Round Robin: Whose Shoes?

It's Round Robin time again, and for the last ten minutes I've been trying to cobble up a good pun to go with this week's topic, "Shoes," as suggested by Vicki of the blog Maraca. The previous sentence is the best one I could find to shoehorn in here. Since this paragraph is almost solely about stepping into some gags, which have already gotten rather arch, let's toe the line, shall we, before I feel like a heel! 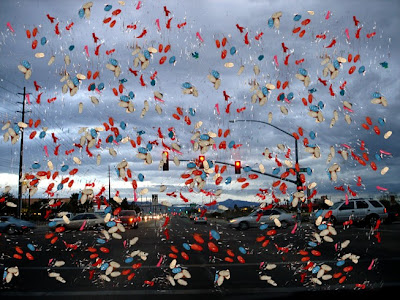 There was a cartoon many years ago by a guy named Jack Ziegler, in which a time and temperature sign on a bank announces, "TODAY'S WEATHER: SHOES." I've never actually seen the cartoon, although I could almost certainly rectify that by pulling out the CD ROM that came with my New Yorker cartoon collection book, and probably will do so shortly. But I read those three extraordinary words in a book review in Time, way back in 1979, and they've stayed with me over since. Today's weather: shoes! Glorious nonsense! That's what's raining down on us this weekend, courtesy of Vicki and the Robins. 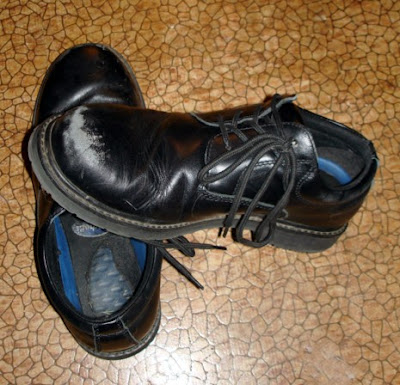 But what shoes can I show you? Do you really want to see the scuffed monstrosities I clop around in everyday? A few years back I posted pictures of the cheap athletic shoes I wore almost exclusively for five or ten years, accompanied by a long explanation about my large feet and the fact that I can only wear men's shoes in certain styles, usually in a size 10 1/2 W, because anything else leaves me with foot pain. Some anonymous idiot showed up a few days later and left a comment about my lack of style. Uh, yeah, thanks for that. Next time, read the text, buddy. 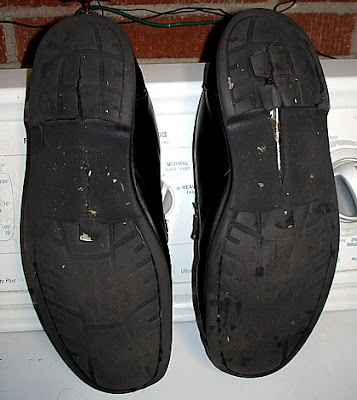 Hey, it could be worse. When my previous pair --laced shoes from Payless for $45, 3 times what I usually pay) died the death after two months in December 2007, the soles actually split down the middle, exposing the metal rods inside. Those were fun to walk in that day - especially when I went to lunch. It was raining. 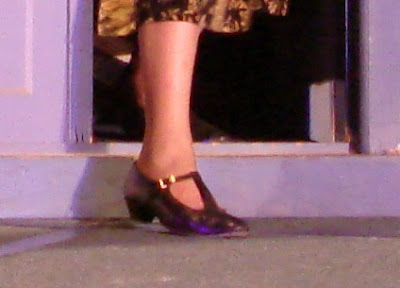 But enough about my shoes. I originally planned to crop a bunch of pictures from the Masque of Mandragora costume contest at Gallifrey One, and show you just the shoes worn by the contestants (and one of the judges, above). But even from the second row, I didn't really get the resolution to end up with nice sharp pictures of everyone's shoes. Still, here are a few anyway: 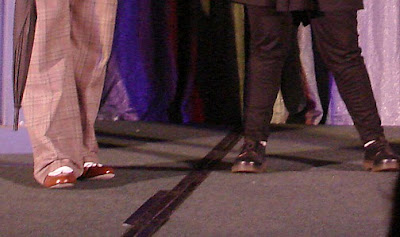 This shot is from a sketch involving the Seventh Doctor (left), his friend Ace (right), and the Second Doctor (not shown). I love the attention to detail the Seventh Doctor guy showed, wearing those two-tone shoes! (By the way, for those who may not know, I'm talking about a convention for my favorite tv show, the long-running British series Doctor Who.) 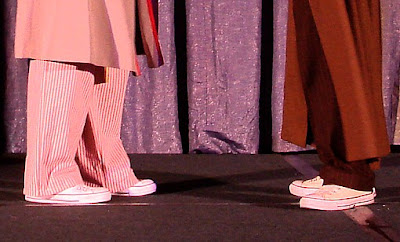 The Fifth Doctor (left) wore what were probably called sneakers, back in the day. The Tenth Doctor (right), who wears this style of footwear exclusively (the better to run around and run away) calls them "trainers." He actually mentioned in a recent mini-episode for charity that his footwear was inspired by his previous self. This is not the first time the Doctor has talked about shoes, though. In the Third Doctor's very first appearance in 1970, his very first line of dialogue consisted of the word "Shoes!" Half-delirious, half scheming, he was trying to recover his shoes from the staff of the hospital where he was a patient. The reason: he'd hidden the key to his TARDIS inside one of his shoes. A quarter century later, the Eighth Doctor was suddenly delighted to discover that a pair of shoes Grace had given him had stretched out, and now "fit perfectly!" 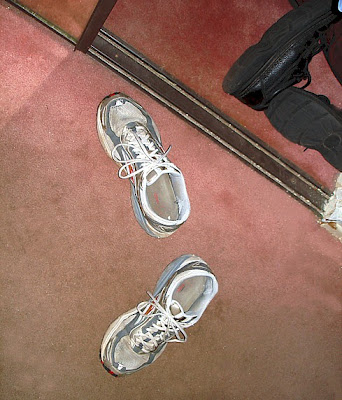 Let's move on to the most stylish shoes here at the Museum of the Weird. As you see above, John's shoes don't qualify, and no, Tuffy doesn't wear shoes. Then whose shoes are they? 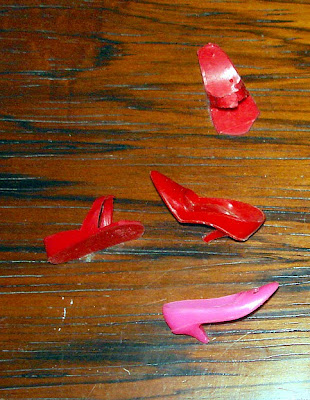 Well, Barbie's of course! And Skipper's, and Tutti's, and Casey's and so on. 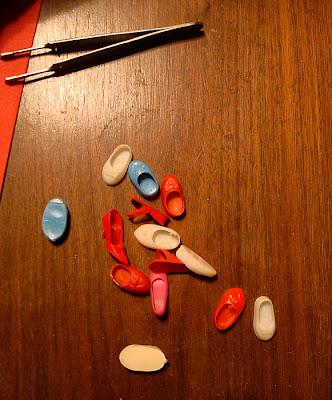 The shorter, rounder shoes in this shot are for the Remco line of "pocketbook dolls" from the 1960s, Heidi and Jan and Spunky. Somewhere along the line the shoes made for these dolls either got much better or much worse, and I have examples of each. Some are fairly heavy plastic, have well-defined molded bows on them, come in several colors, and fit the dolls well, if a little tightly. The others are of thin, white plastic, indistinctly molded and a little too big. Odd, that. Forty-five years, later, however, I don't suppose it matters much! 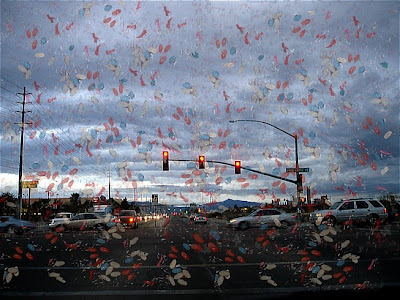 And now you know the source of the shoes in the two "Today's Weather" shots: not rain clouds, but Remco and Mattel.

Teena - POSTED!
It's all about me!
http://purple4mee.blogspot.com/

Email ThisBlogThis!Share to TwitterShare to FacebookShare to Pinterest
Labels: Doctor Who, Gallifrey One, memes, photoblogging, Round Robin Photo, Shoes

You! I am laughing..great entry.
Inspired as always with your blogging.
TJ

I think the doll shes are the best. Ilove the raining shoes photo. very cool.

I love your raining shoes picture! That would be like a dream come true for me - other people want it to rain lemon drops and gumdrops but I think shoes would be even better. And doesn't Barbie have some cute shoes? Great pictures for a fun challenge!

Very clever and creative. I must make sure that my husband reads this or else it will make no sense to him when he asks me what the weather is going to be and I reply, "shoes"...lol.

Karen,
These are wonderful!!! You always go above and beyond in your entries.

Wow, memory flash back. I would always dress up my Barbie and get her shoes on and sure enough, a shoe would fall off during her excursion to Ken's house. The next thing I knew, Mom was stepping on that tiny high heel shoe with her bare feet and ye-owing. Thanks for the good memories of my childhood and love the pictures. (the oldest shoes are always the best!)

Love "shoe weather" -- What a wonderfully creative shot! And you gotta wonder where "the doc" ever found those two-tones. Lots of fun, Karen!

love the weather "shoes". thanks for checkin out my
"life".

Incredibly creative. =) I think I'd have to invest in a hard hat if it ever actually did rain shoes, lol.

Thanks for the compliments on my entry, I happen to like the black and white shot best as well. (:

The Monday Photo Shoot sounds intriquing, I'm definitly going to do that one. =)

Wow ! lots of shoes ! I think I haven't seen so many in the last 10 years, lol ! I have to say I never pay attention to shoes and one could live with me in slippers for 20 years and I wouldn't even notice it !

My son J.D. would likely very much appreciate your Doctor Who references as he was into that series for quite a while, if I'm remembering correctly.

I like your variety of shoes. I didn't get to play with Barbie when I was young, so you might say I had a shoe-deprived childhood. ;-) Neat post!

I love all the Barbie shoes! It looks like you wear your shos until they can be worn no more. :) I too wear mostly men's shoes, they are more comfortable, and less foo-fooey ♥

Thanks for stopping by mine :)

It's raining shoes!!! What a great idea. May I steal it for a series of paintings? Excellent.

Nice assortment of shoe pics. I love the shoe weather, which I think my bedroom looks like when I try to find a pr. of shoes to wear! And the doll shoes brought up childhood memories of my skipper and barbie dolls, and the pain in the butt the shoes were to keep together and not get lost!

lol the barbie shoes crack me up :-)