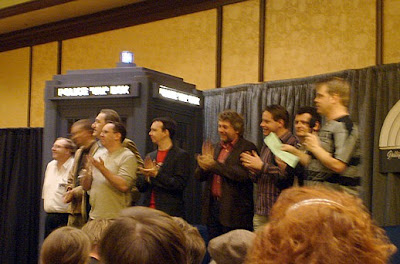 Some of the writerly guests at Gallifrey One this year
There's a line in the Christmas 2007 Doctor Who special, "Voyage of the Damned," in which the Doctor offers the opinion that taking a cruise "on your own" doesn't "quite work." As someone whose only cruise was a three day one taken with my mom, I think that's probably about right in most cases. In fact, I would extend the observation to science fiction and sf media conventions, with the same basic exception as in the cruise example.

You see, in both cases it depends on the kind of person who is attending the group activity alone. I imagine that if you're a fearless extrovert, adept at making friends everywhere you go, solo cons and cruises are no problem. I've seen people this weekend (well, a few of them) who can walk up to almost anyone and strike up a successful conversation. Such people, I'm reasonably certain, will be fine in situations like this.

And I have no doubt that people make friends at these things; I've done it myself a number of times over the years. By and large, though, nearly everyone at this convention is either here with someone else or a celebrity with a handler, friends and hangers-on. I'm here alone, and that makes it harder. I've had a good time, met a lot of nice people, taken pictures, looked at merchandise, gained insights and generally been entertained - but it would have all been much better with one or more close friends at my side. In the early days of Gallifrey One, I used to drive out here with Tracy and Teresa, Dimitra and sometimes Sherlock. Now one is dead, two live far away and one has fallen on hard times. And I miss them, darn it, the younger, healthier, Tucson-based versions of them. Sherlock lives in Texas, but at least she used to visit Tucson occasionally when the twins were here.

Still, despite my shyness in person, I haven't been completely isolated socially. I've asked questions in panel discussions, chatted with some of the writers, had a long conversation with someone's mother about travel and her plush Mickey Mouse collection (no, really!), and chatted with other fans about Doctor Who "shipping" (factions in favor of one romantic pairing or another, coupled with antipathy toward rival characters), the casting of Hitchhiker's Guide characters in different media, and hatred of the character Dawn in Buffy fandom. But today, when I wasn't in an overflow crowd at a live DVD commentary, a Sylvester McCoy interview or some other event, I've been at loose ends, wandering around looking for something to connect with. In the hall, people hung around chatting with friends. In the con suite, people ate bologna and watched a show about people who survived serious accidents. In the lobby, just outside the hotel bar, groupings of chairs and tables held an ever-changing assortment of celebrities and fans, with the celebrities chatting to each other as fans looked on. Sometimes fans were part of the main conversation, but mostly only if they were personal acquaintances one of more of the celebrities present. These conversations were almost inevitably punctuated by people going to the bar and bringing back another round.

If you're at a convention with a friend or family member, you're automatically not pathetic (by fandom standards) or lonely or bored. Even if the programming of the moment consists of a screening of That Awful Show, a panel discussion with the Second Actor From the Left, an autograph session with nonfiction writers you've never heard of and a retrospective slideshow on the history of athletic shoes in science fiction, you have someone to talk to about something more interesting, perhaps with three to five other fans joining in along the way. But when you're there alone, it's trickier. Does that person you know casually from past conventions want you hanging around all the time, just because you're on a first name basis? Probably not. Is it permissible to hang around at the fringes of the crowd surrounding your favorite actor? In some cases, the answer is yes, but if you stay at the fringes you probably won't hear much of the conversation, much less contribute to it. And if you hang around one celebrity all weekend I imagine that you'll seem a little creepy.

I'm on a first name basis with one person from Phoenix and two from L.A., and I've met a number of the celebrities several times over the years. I've interviewed Sylvester McCoy and Sophie Aldred, who starred in the show in the last 1980s; but it was over a decade ago and they're exceedingly unlikely to remember. A few of the writers remember that I wrote those trading cards in the mid-1990s, and one more remembers the comment I left on his blog about the Lennon-McCartney dynamic. But none of that gives me a license to hang out with them, beyond the non-intrusive, limited contact that is the norm here.

Other fans can and do have conversations, with the celebrities and with each other, beyond what I've managed so far. Yes, they have their support groups of friends and family members and the excuse of past acquaintance; some of them have been coming to this thing nearly every year since 1990, and even many of the celebs have been here three times or more. Even so, in trying to strike a balance between too intrusive and too unobtrusive, I'm pretty sure I'm well into the latter category. I've done well in some one-to-one situations, but overall I think I rate a D+ for social interaction this weekend.

I'll have to see what I can do tomorrow to raise that grade.

Email ThisBlogThis!Share to TwitterShare to FacebookShare to Pinterest
Labels: Doctor Who, fandom, Gallifrey One, Mind, Personal

Give a little notice before the next one you want to attend and I will volunteer to meet you there! I've only attended one convention in my life (a Star Trek one) and have see and missed many many others. I want to go, but not by myself! :-)

I would definitely be in your shoes at something like this. I'm waffling about going to this summer's BlogHer conference in San Francisco for a similar reason. I think you're entirely right that these things are easier for extroverts...but at least you did go on your own. I don't know that I could have.

Hope you mingle more on Sunday!

I am probably more of an extrovert, and I did get to know a fair amount of people this weekend, but even a lonely extrovert can be awkward and turn people off (by experience).

My advice is to keep having little conversations with a bunch of people, some you will have better chemistry with than others, and don't stay too long in any conversation. Then, you'll run into the people you clicked with a little later, and have another conversation. Gradually you will develop deeper acqaintances with a smaller subset of the original large group of people you talked to.

Granted I didn't come alone this time, which does make a difference, but I think I made a couple of starting friendships with new people this year. I have been doing cons for years and while I started out as the nervous looking vulcan in the corner who didn't know anyone, at this point I have developed many many acquaintances, some closer friends, and even met my current husband that way. These days I miss panels because I hang out too much...