Weekend Assignment #234: It's a Good Thing

The new Weekend Assignment is so simple, the only trouble you're likely to have is narrowing down the possibilities. Ready? Here it is!

Weekend Assignment #234: Tell me one good thing about the area where you live (city, town, or whatever). It doesn't have to be the best thing, just something that's in the plus column for you.

Extra Credit: How could that good thing be even better? 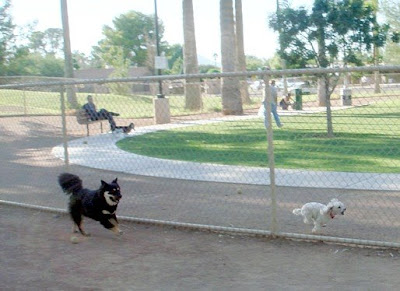 Pepper enjoys a good run with the poodle in the small dog enclosure... 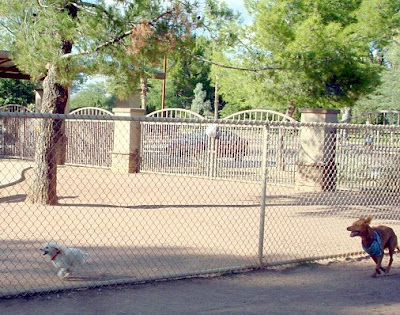 ...and so does Cayenne! Definitely a good thing!
My initial thought when I came up with this topic this afternoon was, "One good thing in Tucson is the dog park" (Miko's Corner Playground, to be specific). That's where I was at the time, and yes, I count it as a very good thing. The dogs love it, and the people are mostly friendly, and love dogs as much as I do. But surely many places have a dog park, and I spent many years here never visiting the park at all. (It wasn't Miko's Corner until a few years ago, though.) Much as I like it, it's not a major part of Tucson's appeal.

How about this, then? One good thing about Tucson is that even in the city there are signs of nature. On any given day, in any part of town, one may see cactus, lizards, a ground squirrel or two, or some bird other than the usual city birds - a raven, a hawk or a vulture in addition to the doves and sparrows and such. 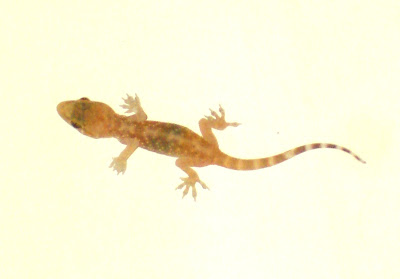 The gecko in my bathtub.
Last night, for example, I went to take a bath, and found this little feller in my bathtub. First I photographed the gecko, and then I caught him and set him free. Lizards turn up in our house about once a month, but geckos are a bit rarer. 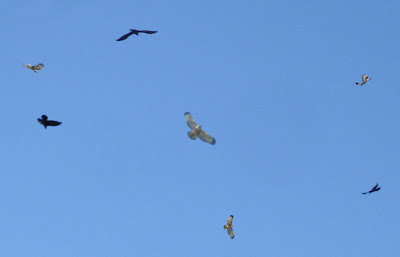 Really, there was just one hawk and just one raven.
Then today as I was loading the dogs into the car at Reid Park, I noticed a smallish hawk wheeling around overhead. That was cool enough, but there was also a Chihuahuan Raven doing the same thing. They circled each other for a couple minutes as I tried to snap pictures of them. (The photo above is a composite of four different shots.) The hawk was probably an immature Red-Tailed Hawk, but it could have been an immature Ferruginous Hawk. The rule of thumb around here, even though we have many species of hawks here, is "90% of all hawks are Red-Tailed Hawks." Se we'll go with that. It was still neat to see. 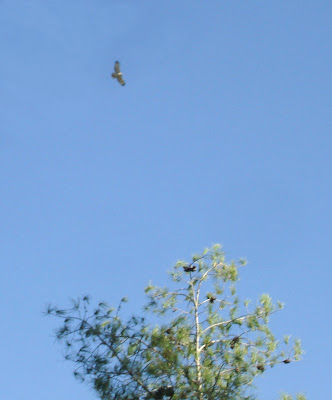 Is that a nest I see?
The last photo in the series pretty much explains what those two birds were doing. The raven is at the top of the tree, and I see a couple of things in that tree that could be nests.

What could be better? As happens in many places, the wild patches in the city - "unimproved lots" and such - are gradually being filled in to slow down sprawl into the wild places at the edges of the metro Tucson area. I definitely see fewer hawks and vultures than I once did, partly because I live in the city now instead of on the outskirts, but mostly because there really are fewer of them around now than 22 years ago. And that makes me sad.

Your turn! What's one good thing you'd like to tell us about your town or city or little bit of nowhere? Write about it in your journal or blog with a link back here, and then visit the comments section below to leave a link back there. I'll be back in a week with a roundup of good things about the places we live.

What, I'm first? Come on, everyone MUST have somethinggood they can say about where they live!

It is always neat to see nature in the middle of a city.

Okay, I finished mine. I rambled a little, but what else is new.

We, too, have a pair of nesting red tail hawks in this area. It's so weird to be walking the dog and find yourself in the shadow of wings, look up and see the reddish tail flit by.

How did it get to be Thursday already? I fully intended to complete this assignment but the week got away from me. Shucks (I did blog this week, though, just not in response to this).

One boast I have to make after reading Mike's post and the comments: here in the Bay Area, we have TWO Ikeas.

what I may have failed to mention is that I've never been inside either one of them. ;)