Weekend Assignment #200: When Are You Going?

Here we are at a milestone: the 200th-ever Weekend Assignment. John Scalzi assigned the first 196 of them, which makes me very much the new kid still in that respect. I've been participating since Weekend Assignment #7, though. In honor of the 200th in the series, I'm going with a topic that's been on my mind since high school, over 30 years ago.

Weekend Assignment #200: You've recently become friends with someone who unexpectedly reveals that he or she has a time machine, all tested out and ready for adventures. Your friend offers you one round trip to anywhere, anywhen, backwards or forwards in time. What's your destination? Or would you rather just stay home? 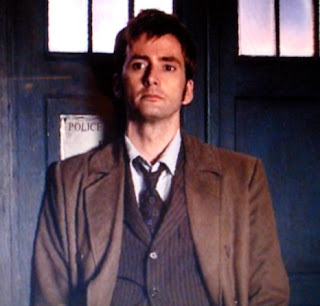 Extra Credit: The first trip is so wildly successful that your friend offers you one more trip, this time in the opposite direction. When are you going this time?

Okay, so it's not the most original topic evah. Scalzi actually wrote a time travel assignment, back on February 24, 2005; but its focus was a bit different, limited as it was to witnessing an historical event. Also, for Weekend Assignment #100, he asked for future facts about yourself. And I gave time travel-related answers to a few topics that weren't really designed for that, including the first Weekend Assignment I ever wrote about. Nevertheless, I think there's enough play here for some fun entries, especially from the science fiction fans among you.

As for me, if I only get one trip, I'm going for the sure thing, something I know I can see on a specific day, and that will have emotional resonance. That all boils down to one key word for me: 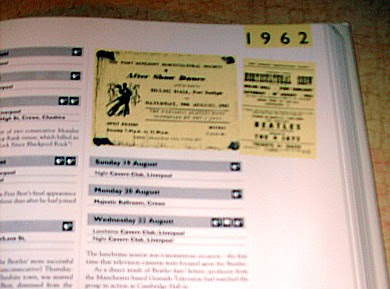 We know what the Beatles were up to, day by day in 1962.
Thanks to Beatles historian Mark Lewisohn and others, we know where the Beatles were and roughly what they were doing pretty much every day from 1961 on, and a lot of days before that. With my friend's help I could arrange to visit the Garden Fete at St. Peter's Church, Woolton on Saturday, 6 July, 1957, just in time to see John Lennon meet Paul McCartney for the first time. Skipping over the Quarry Men and Silver Beatles eras, and their Hamburg gigs at the Indra Club and the Kaiserkeller in 1960, I could zero in on Thursday, 9 February, 1961 at lunchtime, when John, Paul, George and Pete, unadvertised, played the Cavern Club for the first time as Beatles.

But I think I'd have to go for Sunday, 19 August, 1962, their first Cavern appearance with Ringo instead of Pete Best. The following Wednesday, the 22nd, Beatles were again at the Cavern Club, appearing before television cameras for the first time as they performed Some Other Guy. Maybe my friend would let me stick around for that session, too.

For a trip to the future, of course, I can't look up the most likely date and place in advance. I would skip the next fifty years or so, on the grounds that there's a good chance I'll see that chunk of the future in the normal course of events. Too far forward, though, there's a chance the planet isn't there any more, or is uninhabitable. Assuming my friend has already done some exploring, I think I'd simply ask him (or her, but I think it's him) to surprise me.

So how about it? Travel in time in your mind, or, at least plan the trip! Write it up in your blog or journal, and come back here and leave a link to your entry in the comments. (A link to this entry in your blog would also be appreciated.) Then stop back in a week to see what everyone else came up with.

hmm looks like I am first, yay international dateline! You can find my response here:

Here
is mine, Karen. Maybe not the most original idea....

I wandered in by way of Scalzi's blog, by the way.

This actually isn't something I've thought much about, so it was an interesting change of pace for me...here it is, just in case anyone else finds it interesting.

Thanks for another interesting assignment. Here it is:

I am so in.
KiVA, The Eclectic Granny
http://eclecticgranny.blogspot.com/