We're officially still within the first 30 days of winter in the Northern Hemisphere, so we've got quite a bit of it to get through before the spring solstice. This may therefore be a good time to cultivate an appreciation for the season, which I will encourage thus:

Weekend Assignment #198: What is your favorite thing about winter? Whether you love this time of year, hate it or merely endure it, you should be able to find something good to say about the season. What is it?

What do you hate most about winter?

I'll start, shall I? 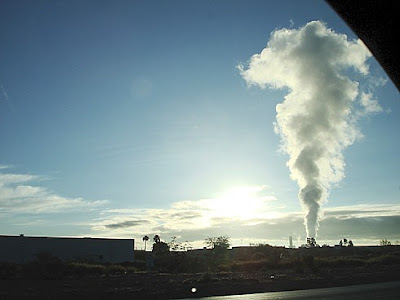 One of the few effects of winter in Tucson
I showed you folks a cropped version of this shot a few days ago, and asked if you could identify it. Only Becky responded, but that's not really the point. This is steam rising from the power plant at Alvernon and Irvington in Tucson, around 8 AM when the air is still cold and humid. With rare exceptions, chilly mornings and the occasional hard freeze are about as close as Tucson gets to having a winter at all. Most of the time, winter in Tucson is much like a mild spring anywhere else: cool but seldom really cold (average high 63 F, average low 38 F), with sunny days and cloudy days. Occasionally it rains, and very rarely, it snows.

What I love most about winter in Tucson is that it's not winter in Syracuse. After all, it's why we moved here. Equally important, it's not summer in Tucson, with the 110 degree days before the monsoon comes along to make things interesting. 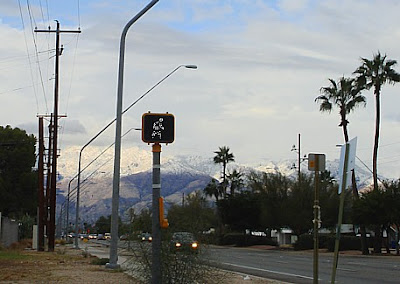 Mid-December snow - at a safe distance
Still, let's take Tucson out of the equation, and consider winter on its own, this season John and I tried to evade in 1986 by driving around most of the southern United States. 21 years later, I have to say that I like snow, as long as it's in carefully regulated doses. If I were still in New York or Ohio I'd probably go outside long enough to take some nice pictures during or after each snowfall, and appreciate the beauty of it before the cars, the sand and the salt turn it into black ice. Then I'd get the heck back inside, and admire it through a window instead. Here in Tucson, I wait for snow to show up on the mountains, and photograph it that way. Snow without the cold, as far as I'm concerned, is the best of both worlds.

As for the extra credit, you've probably worked out already what my answer is. I hate being cold. Chilly, fine, sure, yeah, and I'll even venture out into 11 degree weather if I have a good reason to do so. But I'll be glad to go through the rest of my life without ever again trying to warm my damp and reddened hands as I wait for a bus in a blizzard.

Your turn: tell us what you like best about winter. Write it up in your blog or journal, and then come back here and leave a link in comments. We'll gather back here in a week with a roundup of the warmest things people found to say about our coldest season.

Hi Karen. I finished my assignment.
You can find it
here

here is mine
http://adventuresinjuggling.wordpress.com/2008/01/12/weekend-assignment-198-winters-winning-ways/
have a great weekend.

Hi Karen you can find my response
here

Also I wanted to send a message to my blog readers (I know they are out there my hit counter registers two or three hits per day). Please leave comments if you have something to say about any of the posted topics. Lively discussions are never boring.

I supposed it would have helped if I'd given you the URL:

Hey Karen (I love that name) My first Weekend Assignment post is on my blog, Eclectic Granny, at
http://eclecticgranny.blogspot.com/