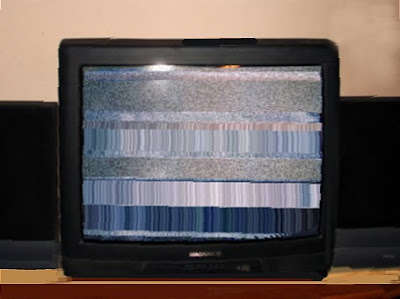 There's not a lot on tv these days.
Weekend Assignment #197: Now that the WGA strike has had lots of time to affect the prime time television schedules, how is it affecting you as a viewer? What show do you miss most, aside from reruns? Do you miss your weekly appointment with that ill-behaved doctor, or your visits to Wisteria Lane? Does it bother you not to laugh at fresh jokes on your favorite sitcom? Or are you just as happy watching reality shows, or new episodes of shows that have been held back until now? We want to know!

Extra Credit: how are you spending the time instead?

To be honest, I don't watch much broadcast TV myself. Most of the time I watch DVDs instead, if anything. But even I am missing the few shows I normally do watch. Three of them are--or were--on NBC's Monday night sf lineup: Chuck, followed by Heroes, followed by Journeyman. I kind of lost track of Chuck after he fought with his beautiful C.I.A. minder once too often, but I watched the other two every week.

And much as I like Hiro and Peter and Claire, I have to say the show I miss the most that night is Journeyman. I'm a sucker for time travel shows anyway, and this one does it well. Sure, it's essentially a Quantum Leap ripoff, but there are worse things to rip off--much worse. And the character dynamics are interesting, as the wife struggles to cope with her frequently time-lost husband, their young son starts to catch on to what is happening, and the traveler's brother struggles to make sense of what's happening with more mundane explanations. Good stuff!

Then there's Tuesday night. And yes, Julie, I do miss House MD, probably more than Journeyman. I think.

And what do I do on Monday and Tuesday nights? Why, I spend it at the computer, of course, with a DVD running on one laptop and ten tabs of Firefox open on the other!

Your turn: write up what you miss (or don't miss) on tv these days, and come back here and leave a link in comments. If for some reason you have trouble commenting (although it should work for everyone, one way or another), feel free to email your link to mavarin at aol.com. To give time for word to spread and everyone to play, I'll do the roundup of your links in one week, next Thursday night. Got it? Good! Thanks, folks! I know I'm no John Scalzi, but we don't have to lose his legacy, as long as some of us care enough to keep it going!

Edit: I have been taken to task for not explaining what the WGA is and why it matters. I don't want to get into the politics of it (let's just say I'm pro-WGA and leave it at that), but here's what it's about:

WGA is the Writer's Guild of America, the folks who write the TV shows. As has been widely reported over the last few months, they're on strike, so networks and production companies are running out of new episodes of comedies and dramas. Why it matters, aside from inconvenience to the viewer and economic impact on the entertainment industry and the New York and California economies, is that it's a battle over writers being compensated for their work in new media such as Internet downloads. The result will set a precedent in determining the extent to which new tech is made part of the royalty pie.

Hey! My first time as a participant! And I'm the first to post!

My answer is here.

Thanks for taking these up, Karen. I think you're going to do a great job.

Hi Karen! I followed the link from Mr. Scalzi's blog.

Coming over from the Whatever - here's my response.

Hi Karen, I am a regular Whatever reader and I am glad John has found a good home for Weekend Assignment.

You can find my response to this weeks assignment here

Hi Karen, sent over from Whatever for the Weekend Assignment. First time here, but I like what I see.

You can find my assignment here

Refered by Whatever. This is way fun! My response is here.

congratulations and thank you, Karen! here is my assignment:
http://adventuresinjuggling.wordpress.com/2008/01/04/where-in-the-world-is-the-weekend-assignment-196-edition/

Here's my blog post reply, with a little prologue prior for anyone (read: my friends) who's not really aware of the strike.

My reply. Thanks for doing this.

I have a two-fer here.

Yay for new blog fodder! (And hello from a fellow Tucsonan). My contribution's here: http://syrinxkat.livejournal.com/243805.html

larry: Good point. I should define my terms. WGA is Writer's Guild of America, the folks who write the TV shows. As has been widely reported over the last few months, they're on strike, so networks and production companies are running out of new episodes of comedies and dramas. Why it matters, aside from inconvenience to the viewer and economic impact on the entertainment industry and the New York and California economies, is that it's a battle over writers being compensated for their work in new media such as Internet downloads. The result will set a precedent in determining the extent to which new tech is made part of the royalty pie.

I guess if I ever watched television, I would have known that.

But I don't and I was afraid there was a penalty for guessing.

Do I never watch television? Not really. But on the occasion that I do (because I am trapped in a restaurant, or I want to talk to my wife, it appears to me that "writers" are not part of the process (except maybe in the football games).

Karen - I picked up the link to your blog from John's Whatever post. I just started blogging a few weeks ago, so this is my first Weekend Assignment. Here's the link:

"Taken to task" is way too strong--I was trying to be funny. Or ironic. Or stupid. Or something.

Nice pictures, by the way. I am a cloud fan.

"No cats". Hmmmmm. That could be a problem. Nice dog tho'.

I'm glad to see someone continuing the tradition. Here's my stab at it.

I was just whining about the fact that I sometimes had nothing to write about. And now I find this. Thanks!

My comments on this topic can be found here: [Mostly] Unmissed Words.

This is my first "weekend assignment," but I doubt it will be the last! I came here via Whatever, but that's pretty new to me as well. My response is here.

Sorry for being dumb. Came from Whatever. Here's my response.

Another member of the Scalzilance here. Here's my contribution.

Saw this on the Whatever as well. Here's my entry

I know it is after the original post, but I am a hardcore Heroes junkie, and seriously, the interruption in my enjoyment of same *is* my experience of the strike. I watch shows only for my addictions--this is the one whose absence I notice: http://vixenstrangelymakesuncommonsense.blogspot.com/2008/01/so-can-i-blog-about-tv-little.html

This is fun. Thanks for doing it.