EMPS: The Problem With Condiments

For EMPS #27: CONDIMENTS, Carly wants to see photos of our favorite condiments. I suppose I could show you a photo of Plochman's mustard in the barrel-shaped squeeze bottle, but I don't, you know, care about mustard, or even use it that much. Unless you count cheese, I don't use any single condiment very often. So instead I'm going to rant a rant. A condiment rant. You don't mind, do you? 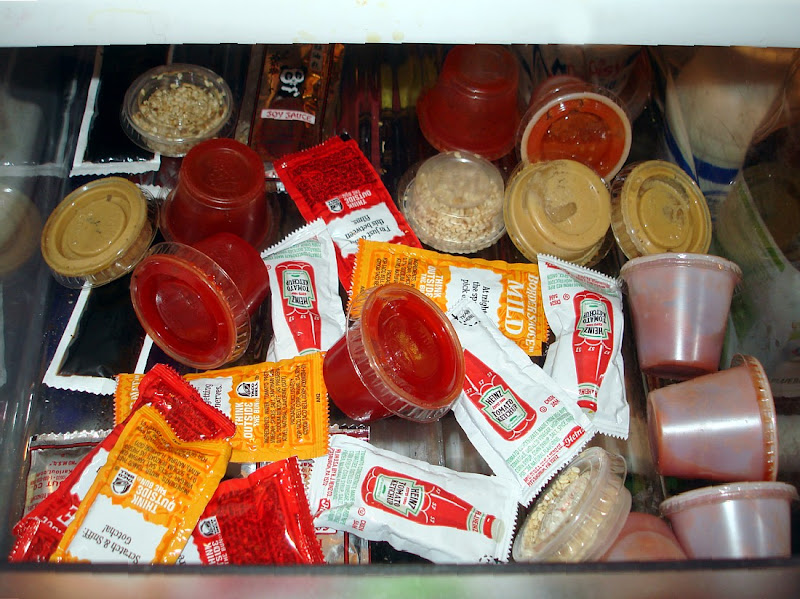 This is the meat compartment of our refrigerator, from which I just removed some expired lunchmeat. It currently contains Taco Bell packets (Fire and Mild), ketchup packets, sesame seeds, sweet and sour (duck) sauce, John's Chinese mustard and a little soy sauce. John would prefer to throw all this stuff away, but I keep insisting that there are times when I need these, and it would be foolish to waste them. But really, there's more here than we're likely to use up soon, unless we go on a teriyaki and taco binge. Hmm. Tomorrow is Teriyaki Tuesday at Yokohama.... 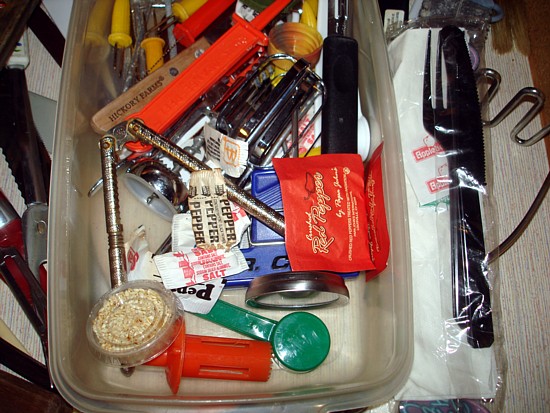 Here's some more, in the junk drawer. Red pepper, and regular salt and pepper. I suppose they're technically seasonings rather than condiments, but it's the same problem. But I swear it's not my fault. When a fast food place or restaurant from which I order take-out asks about condiments, I request some small number, say one or two of each depending on the food and what I think we'll use. If I know we already have some I don't request any more at all. But half the time some kid puts in a handful of whatever it is, with or without asking my preference.

And I do use the stuff up sometimes. The junk drawer used to have some grated cheese from the two pizza places, and more red pepper than there is now. I've also used up a few of the duck sauces, the occasional ketchup and nearly all the soy sauce. 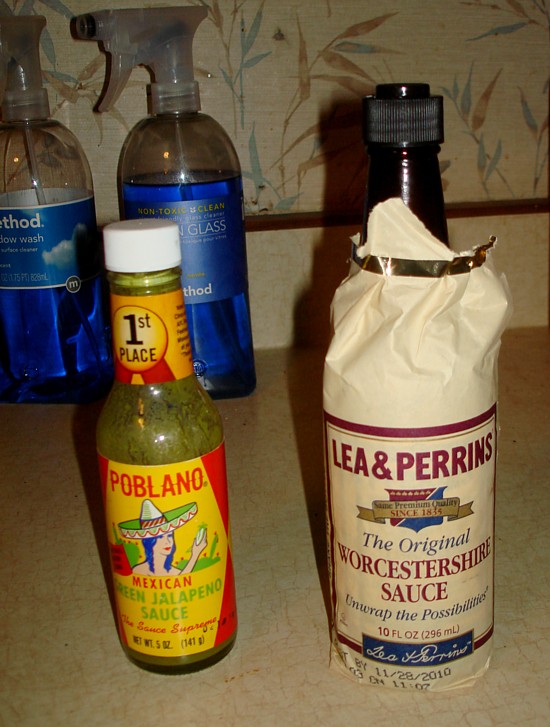 What about the condiments we actually buy? They can be much harder to use up than a few little packets. This green sauce is a local brand that John likes a lot on certain foods. When he was eating those foods on a frequent basis, he probably went through a bottle of Poblano sauce every three or four weeks. But I suspect that the current bottle has been around for a year or longer. And that's nothing compared to the Lee & Perrins Worcestershire Sauce, which I use on lamb and very rarely on steak (in part because I rarely buy steak, although I love it). This particular bottle, the smallest I could find at Safeway a week or two ago, replaces a much smaller bottle that lasted me a minimum of five years, probably closer to ten. When only one person in the house is using a condiment, and only on specific foods eaten infrequently, these things can last a long, long time. Good thing some of them aren't very perishable! (I notice belatedly that this bottle of Lee & Perrins expires toward the end of next year. I probably shouldn't have kept its predecessor around nearly as long as I did.) 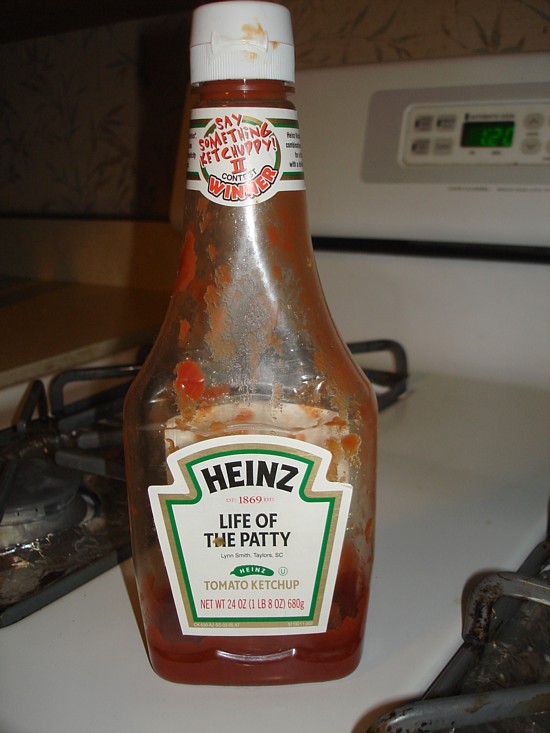 And what am I to do with this? It's a limited edition Heinz bottle from a few years ago. It's been almost empty for quite some time, but I don't want to recycle it because it amuses me and I still remember how amazed I was the first time I saw the oddly labeled Heinz ketchup products in the store, with no fanfare or explanation. I should either wash this out and put it in a box, or wash it out and put it in the recycling bin. So far I've done neither, and it's taken out an extended lease in a half-hidden spot in our refrigerator. Is it any wonder that the Museum of the Weird is overrun with exhibits?

Of course, once John reads this entry, he's sure to insist on a purge. And he's probably right! But let me keep the soy sauce and a few duck sauces, okay?

I don't think this sounds so much a rant as a thoughtful dissertation on your condiments. :-) You do have quite a few of them, although a lot in small containers. I've never had duck sauce -- sounds interesting. Is it for duck? ;-)

I got quiet a number of the similar packet of chilli sauce from fast food outlet, which I kept in the fridge. They come in handy when I packed breakfast/lunch for my sons and husband , to bring to work. I remembered bringing them along for my overseas trip too, real handy especially when no chilli sauce is not being served.

Now that is a collection! About the ketchup... um... I would toss that, but it's just me. It's amusing, but not so amusing I would risk food poisoning. Take it's portrait, and set it free. As for the millions of packs, I have been reading that most fast food places are considering charging now for them, so that might help avoid the unwanted condiments in the future. The economy is affecting everything. :(

I don't think I've ever seen green jalapeno sauce before. I'm not a spicy food person, that may be the reason.

I love the drawer of condiments. I think everyone has one of those. :)