As you can see from my previous two entries, Florinda of The 3 R's: Reading, 'Riting, and Randomness recently received a "Brillante Weblog" award, which she then awarded to Mike of Everything Under the Sun (among others), who in turn awarded it to Carly and to me (among others). These fun recognitions make the rounds from time to time, and I think it might be interesting to shake things up a bit. To wit:

Weekend Assignment #228: Design your own blog award, recognizing one particular virtue found in some blogs (e.g. political savvy, humor, an engaging prose style, a particular kind of photography, etc.). Award it to one - and only one - blog, and explain your choice!

Who is your runner-up for that same award?

I've been at this blogging thing for a while now (since March, 2004), received several recognitions of one sort or another (always a bit of a thrill!), and have had a number of opportunities to recommend other blogs I enjoy. This latest award thingy calls for me to award it to seven other blogs. My sleep schedule being what it is, I won't have time to do that properly until the weekend, especially since I'm determined to choose blogs I haven't given similar honors in the past. So for tonight, let me just design and present a singular, specialized award: 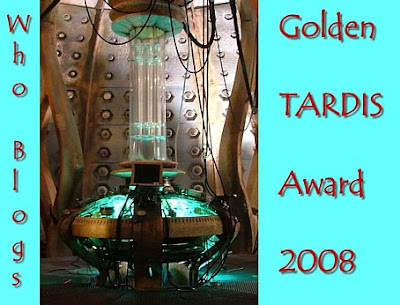 The Golden TARDIS Award is designed to recognize one blog that is of interest to Doctor Who fans, but transcends that category by covering a variety of subjects with humor and insight. Believe it or not, a number of blogs exist that fit those parameters!

On my sidebar is a section of links entitled Who Blogs? The blogs on it are by people who write for Doctor Who, write about Doctor Who, or both. (One of them played the title role in Doctor Who.) From a writing standpoint, my favorites are the ones by Who scripters Paul Cornell (of Paul Cornell's House of Awkwardness) and James Moran (The Pen Is Mightier Than the Spork). 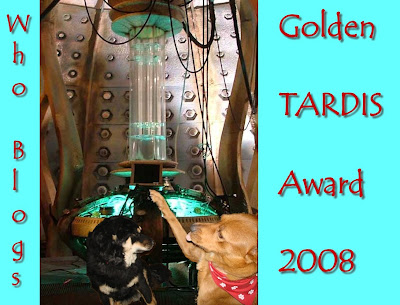 Some of the people who write about Doctor Who specialize in just that on their blogs, which is perfectly fine with me. But the working professionals, especially Cornell and Moran as well as actor Colin Baker, cover more territory than that. Baker writes (when he blogs at all) mostly about his current acting gigs, and Cornell and Moran write about their various and sundry writing gigs, the writing process, awards, travels, and a little bit about their lives. In May of this year, Paul Cornell wrote a truly harrowing (yet strangely amusing) account of a serious car accident that he and his wife fortunately survived with minor injuries. Amazing. I guess what I'm saying is, come for the Doctor Who tidbits, stay for the insights and the great writing.

Paul Cornell is at Worldcon this weekend, up for a Hugo Award for his wonderful Doctor Who story Human Nature / The Family of Blood. Even if Steven Moffat wins instead (for Blink, which is also quite good), Paul doesn't need my silly little award. But tough - he's getting it anyway. And my runner-up, James Moran, will no doubt be up for some major awards of his own in years to come.

Your turn! Come up with your own specialized blogging award, award it, and tell us about it in your blog or journal. Don't forget to link to the honored blog as well as back here, and don't forget to link to your own entry in the comments below. I'll be back with our own little award ceremony a week from now!

I'm not quite sure if this meets your criteria, but here you go:

Thanks for the extension! Mine may be lacking a little, but I did the best I could.