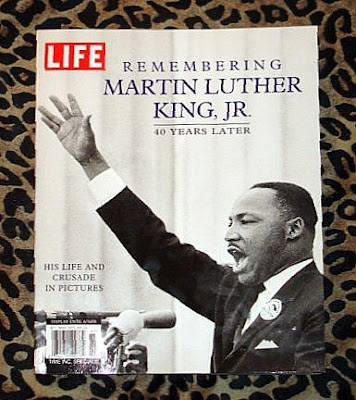 Forty years ago, a famous clergyman, civil rights activist, antiwar dissident and advocate for the poor was murdered as he stood on a hotel balcony, the day after giving one of the most famous and electrifying speeches of the 20th century. Exhausted, the Rev. Martin Luther King Jr. had tried to get out of making a public appearance that night, but the people gathered at the Mason Temple in Memphis would not settle for hearing Rev. Ralph Abernathy instead.

So King was sent for. He roused himself to speak of great moments in history, and that if God offered him a chance to live in those times, he "wouldn't stop there," but instead would ask "to live just a few years in the second half of the 20th century." He said that "It is no longer a choice between violence and nonviolence in this world; it's nonviolence or nonexistence." He spoke out on behalf of the striking Memphis sanitation workers, walking the picket lines with signs that read, "I AM A MAN." He exhorted the audience to act with a "dangerous unselfishness" toward the strikers, following the example of the Good Samaritan.

He talked about having been stabbed in the chest with a letter opener years earlier, and a newspaper report that if he had sneezed while awaiting treatment, he would have died. He then told of a letter he received days afterward, from a girl who said she was glad he didn't sneeze. He told of the civil rights triumphs he had been able to witness because he hadn't sneezed. Then he assumed the metaphorical role of Moses in his unforgettable concluding words:

Well, I don't know what will happen now. We've got some difficult days ahead. But it really doesn't matter with me now, because I've been to the mountaintop.

And I don't mind.

Like anybody, I would like to live a long life. Longevity has its place. But I'm not concerned about that now. I just want to do God's will. And He's allowed me to go up to the mountain. And I've looked over. And I've seen the Promised Land. I may not get there with you. But I want you to know tonight, that we, as a people, will get to the promised land!

And so I'm happy, tonight. I'm not worried about anything. I'm not fearing any man! Mine eyes have seen the glory of the coming of the Lord!!

Then he sort of collapsed, and his friends helped him into a chair. The next day, after years of threats and attacks (including a bomb, thrown stones and police brutality), he was shot to death. He was 39 years old.

Which is my longest intro yet to a Weekend Assignment:

Weekend Assignment #210: It's been 40 years since the Mountaintop speech, and even longer since the great speeches of John F Kennedy, Winston Churchill, Franklin Delano Roosevelt, Abraham Lincoln and others. Are the days of great oratory behind us, or have you drawn inspiration from some recent public speaker? If so, what was the speech? Do you remember any actual quotes from it?

Extra Credit: Have you ever given a speech, other than in a classroom?

My answer: I was extremely impressed with Barack Obama's speech at the Democratic Convention four years ago, and mildly impressed with the one he gave last week on race relations. And I'm inspired by sermons at St. Michael's on a regular basis. But no, I can't quote from any of the above. I just know that Obama spoke of red states and blue states in the earlier speech, and his grandmother in the later one; and that Father Ireland considers the story of Rudolph the Red-Nosed Reindeer to be sick and twisted. Oh, and to be fair, I should also mention that I loved Hillary Clinton's bowlathon announcement on April Fool's Day.

On the other hand, I can quote verbatim from speeches by a number of fictional characters on tv. What does that say about me, and about the state of oratory today?

As for the extra credit: no, I've never given a speech except as a class assignment. But I think it would be fun.

Your turn: tell us who, if anyone, has inspired you while speaking in public. Write it up in your blog or journal, along with a link back here. Then leave a link to your entry in the comments thread below. I'll be back in a week with a roundup of everyone's entries.

I feel like sitting this one out. But if I were to add my two cents I would have to agree with you in that I found Obama's speech inspiring. I found solace in his words as he touched upon an important issue in American society.

Oratory as an art form can't die down. Humans need regular doses of inspiration just to keep hope alive. Most of the time I am recieving the dose as my shy nature has hampered my public speaking career!

I had some difficulty with this one, but I did it. I'm wiht you, I can recite things from TV much easier than speeches. Mine is here.

Here's my assignment. And posted a whole six minutes before the weekend ended.

Hi
I particpated this week, you can find my WA right over here...

This was a challenge for me, but here you go anyway!

I didn't get to it on the actual weekend, but I got to it.

Oh dear - somehow I was thinking "Weekly Assignment" instead of "Weekend Assignment." So mine is terribly, terribly late, but here it is anyway.

Not to worry, Kristi. You're not too late at all. It's called the Weekend Assignment because it was originally intended (by John Scalzi, who started it) to give people something to write about on weekends. But on my watch, people have a week to get it done, because that's easier for everyone.

Of course, if nobody posted anything until the following Wednesday, I would start to worry myself!

I'm losing it. I thought I published this yesterday, but I found it in draft format tonight. It's now really up.
Kiva, the Eclectic Granny
http://eclecticgranny.blogspot.com