Your Monday Photo Shoot: Take a picture of something you've made. Pottery, cookies, a drawing or painting, a poem or a pipe cleaner stick man -- it's all good, it just has to have been made by you. Show off your creativity.

First of all, John Scalzi, Carly, Steven, Pat and I want you to know you've put us in a bit of a pickle with this one. Compare your topic with the one announced this past Thursday for the next Round Robin Photo Challenge, entries to be posted on Wednesday, November 1st:

Pat (Deslily) author of the journal, "Here There And Everywhere 2nd Edition," has chosen "The Creative Side Of You" as our theme for the challenge.... Show off your creative side, by posting photos of anything you have created from scratch.

Of course we'll forgive you if you plug the Round Robin Photo Challenges. We've being doing these for a year and a half, and you haven't mentioned them yet, perhaps because we didn't ask! Well, we're asking now - nicely, even. Pretty please, beloved Blogfather? Hey, you can even be a Robin yourself if you want to!

While our favorite Campbell Award winner is mulling that over, let's get on with posting a few pictures of things I made. These are three issues of The Observer, the Quantum Leap fanzine / newsletter I used to edit. I designed all of these covers (and many others), wrote much of the stuff inside and edited the rest. 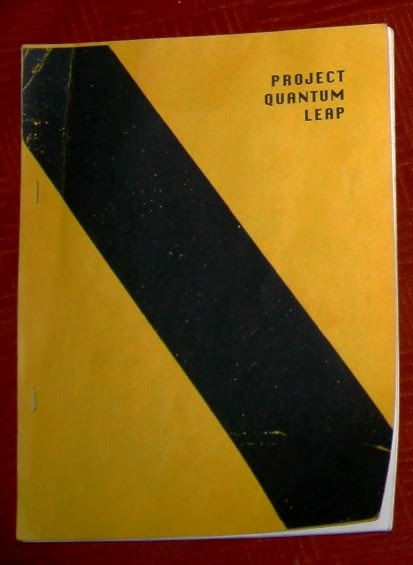 This first cover doesn't look like much, but it's from the first issue of the zine, back around Christmas 1990. It's also an almost exact replica of the cover of a report issued to members of a Senate Committee deciding the fate of Project Quantum Leap in the second season premiere episode, "Honeymoon Express." 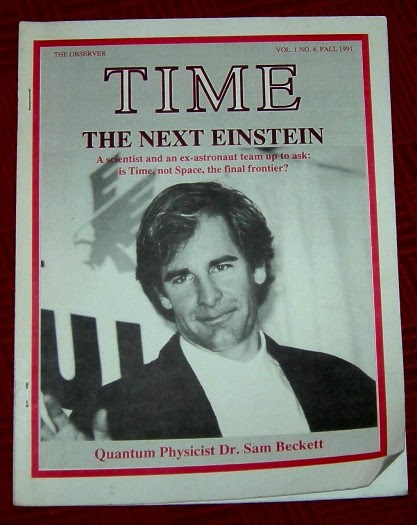 This cover is from the fourth issue. I didn't take the photo, and I certainly didn't create or design one of the premiere news magazines of all time. But I did design this parody of their distinctive covers. It refers to a line of dialogue in the pilot episode, in which Al tells amnesiac Sam Beckett that "Time Magazine even called you 'the next Einstein.'" I sent a framed copy of this to the show's production office, back in the day. 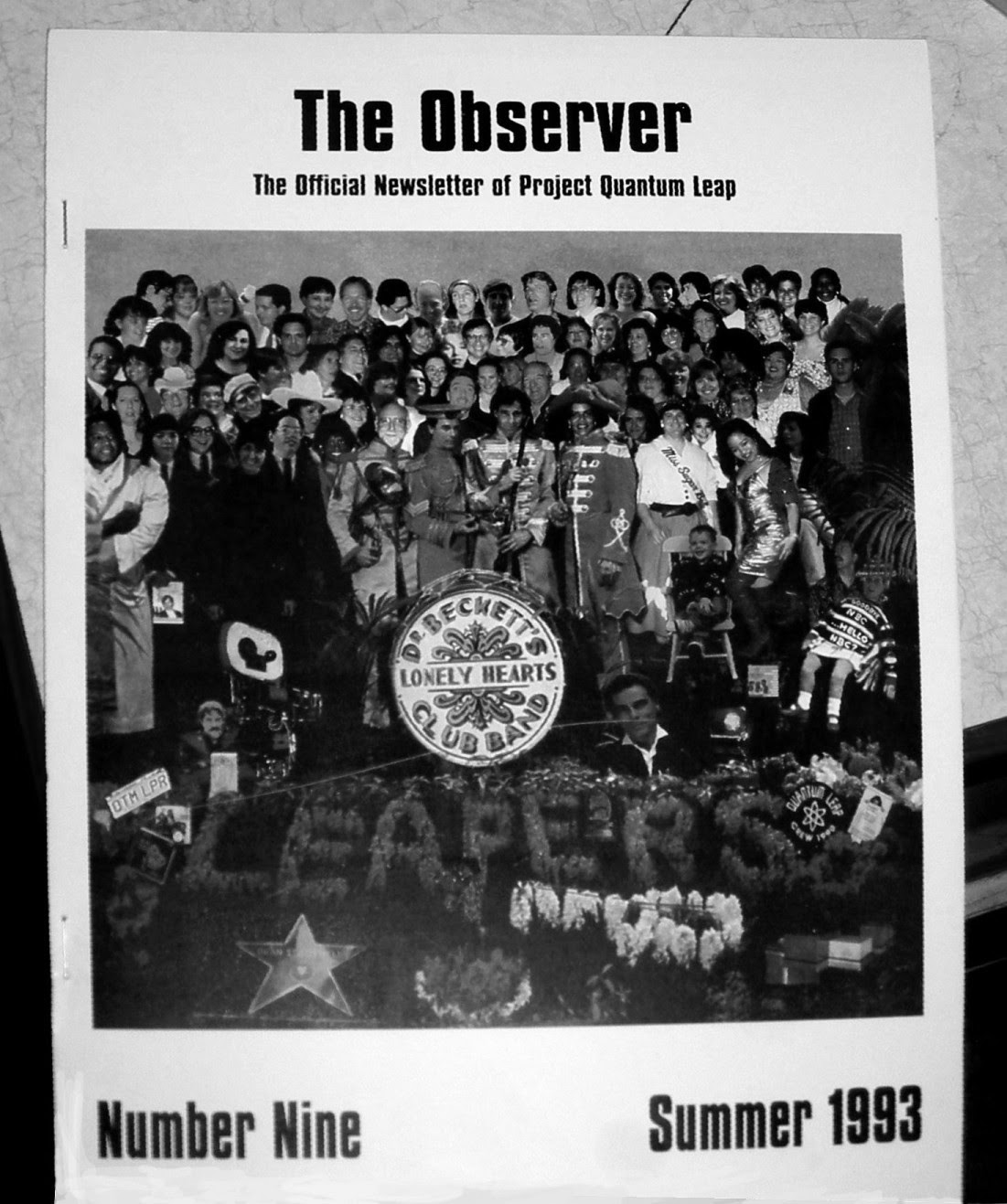 Now we come to the best cover I ever did, certainly the most ambitious and labor-intensive. Back in 1993 I did have access to PhotoShop, unlike now, and worked on a Mac. On the other hand, it was 1993, a long time ago in terms of technology. I replaced every face, every object on the cover of The Beatles' Sergeant Pepper's Lonely Hearts Club Band with someone or something Leapish. I had trouble photographing the glossy cover well, but you get the idea. Click on the photos for much larger versions of the Observer 9 (Number nine, number nine) cover. 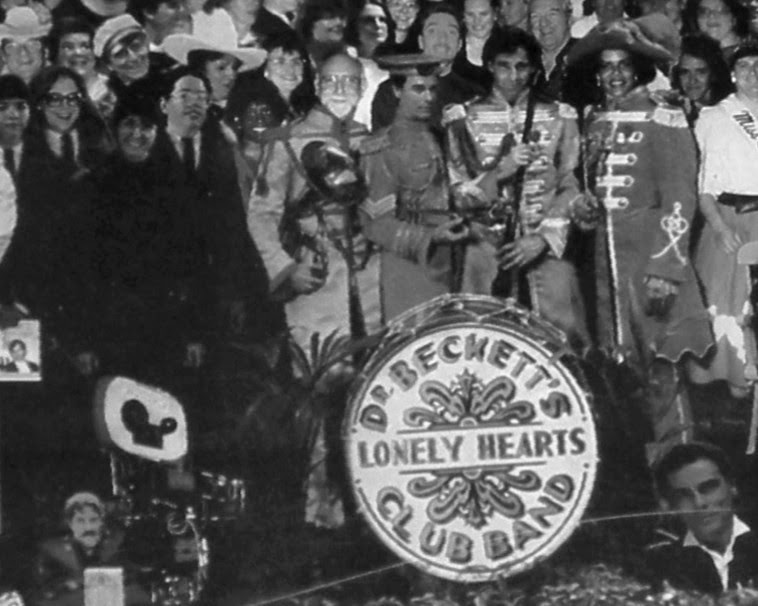 The four Beatles in the center are QL creator Donald P. Bellisario, stars Dean Stockwell and Scott Bakula, and writer/co-executive producer Deborah Pratt. The four waxwork Beatles to the left have been replaced by the four founders of Project Quantum Leap the club. The rest of the cover has guest stars, writers, producers, fans, a crew T-shirt, Dean Stockell's Star on the Hollywood Walk of Fame and a Panavision camera. And Look! Teresa Murray's holding a copy of Observer 4 in her waxwork hand!

If you'd like to join in on the Round Robin topic, we'll be delighted to have you! Please see the Round Robin blog for details. The posting date for entries about "The Creative Side Of You" is Wednesday, November 1st.

Love the E-zone covers! Creative and fun, but also serious because it was for an endeavor close to your heart!

wow good work Karen! I remember the first time i learned how to "clone"..and all I could think of was "wow, so this is how the tabloids put baby faces on monkeys!" LOL...

I need to tell John to stop stealing my ideas! lol.. I hope you saved "the best" for RR!