Okay, I'm not really obsessed with YouTube. I'm obsessed with taking photos and making videos. It's a lot of fun, but there are a few aspects of it that I'm not good at.


1. I still haven't learned to use my Canon EOS Rebel T5 properly, and 99% of the time I use my iPhone instead. It's a lot lighter and easier to carry, and I (mostly) know how to use it. But iPhones have their limitations, and so have I, especially if I don't take the time to really learn photography.


2. I'm terrible at getting people to watch my videos, especially on YouTube. Sometimes I spend an hour or more putting one together, and weeks later, there have been zero views.

I'm very aware that very few people follow this blog anymore, or blogs in general (Whatever and Stonekettle excepted). Nevertheless, here's a post with links to a few of my recent videos. If you come across this post, please do me a favor. Visit my YouTube channel (the main one where nearly all these videos are), watch a few minutes of pretty pictures in motion, and like (if you like) and comment (if you have anything to say). Thanks!

The other obsessions part? I have two of them, currently. It's all interrelated. I'm spending way too much time driving up and down Mount Lemmon, partly to take pictures, but also to take short hikes on side roads and the easiest trails I can find. I have three roads now that I've hiked on, not counting Mount Lemmon Highway itself or the Marshall Gulch section thereof. 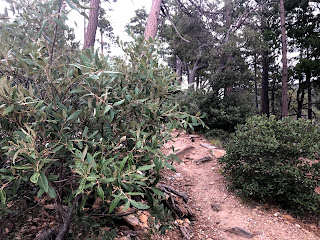 I've also been on at least five trails, two of them unsuccessfully (one was closed and the other was too rugged for me). I'm doing this because it's cooler than the city, and more interesting than walking in a mall or grocery store. The other obsession, you see, is to step up my exercise and get stricter on my dieting. I had been stuck bouncing up and down in an eight-pound range for two months, but as of this part week, with the hikes and other extra walking, I finally seem to be actually losing weight again.

If only I had the metabolism of these guys!