When We Walked on the Moon 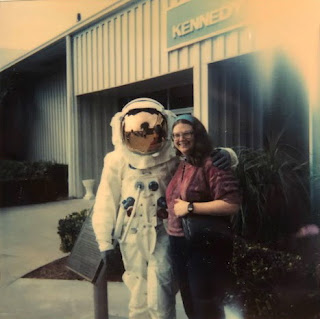 For about ten years when I was a kid, my family rented a beachfront house on Lake Ontario for a week or two each summer. It was called the Speakman Camp, and I slept in the attic. The house had a black and white TV that pulled in one CBS station out of Watertown, NY (WWNY), and I think a couple of the Syracuse ones. Only WWNY had decent reception. I could be wrong, but I think it was from the Speakman Camp that I saw the Beatles on Ed Sullivan in August 1964. And I know for sure that that's where I was when Mom, Dad, Steve and I watched Neil Armstrong set foot on the moon, 50 years ago today. It was a big deal, exciting and important. But the actual image was primitive and blurry, the sound muddy. It was amazing that anyone could speak to us from the moon at all, but it seems to me that I was a little disappointed.

Seven years later, my mom was divorced and I was spending that Bicentennial summer with her in Cape 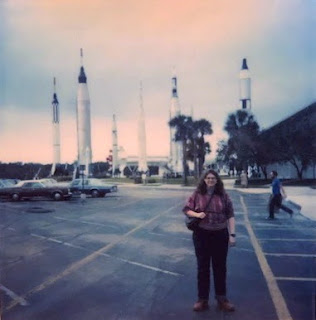 Canaveral, Florida. We visited Kennedy Space Center, and I saw Mission Control. Even then, the technology that achieved this amazing thing was starting to look a little dated. I can't find a photo from that summer, so here are a couple of Polaroid shots from (probably) 1986.

Something that definitely happened in 1986 was the Big Trip. That was when John and I drove all over the country, up and down the East Coast and west to Arizona and California, looking for someplace it wasn't winter. We ended up in Tucson. A year or so after that, a friend of ours from Columbus Ohio, Mark Haverkos, invited us to visit him on the Hopi reservation. As I wrote in 2004:

Back in the late 1980s, a former next door neighbor of ours from 13th Ave in Columbus, Ohio was the hippie, holistic veterinarian to the Hopi Nation.  He lived in Polacca, Arizona, over by First Mesa. ...

The Hopi Reservation is in northeastern Arizona, basically surrounded by Navajo territory. From Holbrook on I-40 / Route 66, there's a road (SR 87) that goes north.  ... Just 13 miles north of the Holbrook exit is the turnoff for the Little Painted Desert.  A visit to this obscure Navajo County park is like a day trip to the moon. 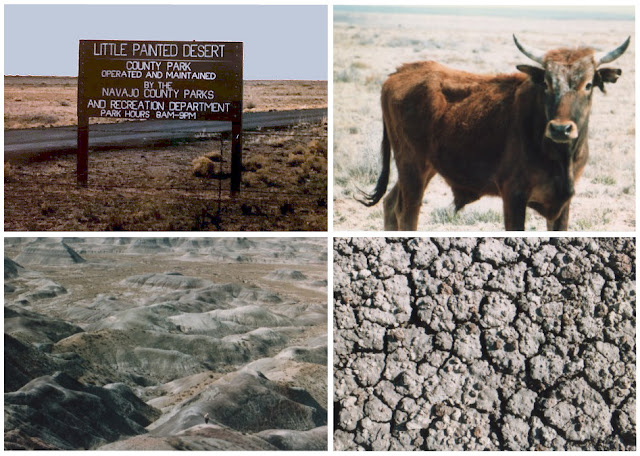 The Little Painted Desert doesn't have the (relatively) bright colors of its more famous National Park namesake, which is south of I-40. The county park version is basically gray.  That just makes it look more alien. The ground is caked and cracked, and hardly anybody goes there.  The day we found the place, for part of the time it was just John, me, Jenny Dog, and a cow.  The cow didn't venture down into the dunes and craters, or whatever you want to call them, but we did. I don't know whether you can find him, but John is in the lower left picture above. 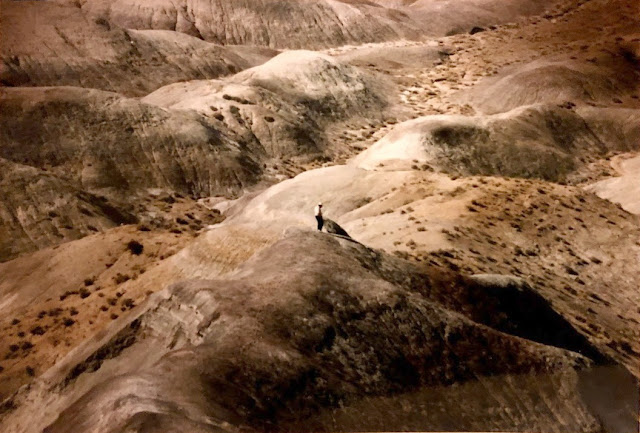 I've been to that park once since then, and it didn't look the same somehow. Neither do my 30-year-old photos. I was going to scan some of them at work today, but I didn't have time. I ended up photographing the photos. 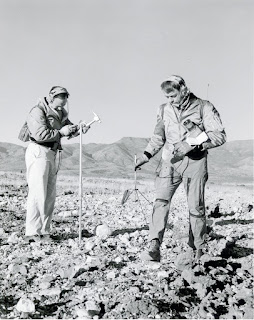 All these years later, any mention of the Apollo program reminds me of that day when John and I walked on this strange, moon-like landscape, with no other creatures in evidence except Jenny Dog and a skinny cow. I haven't found any evidence that the Apollo astronauts trained at the Little Painted Desert, but they were at such nearby sites as Meteor Crater, Hopi Buttes and  the Grand Canyon. They also blasted an area at Cinder Lake to make their own custom crater field.