I can't put this off any longer: 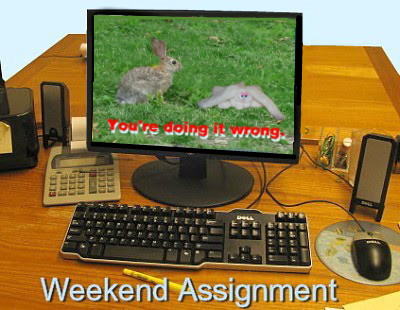 Weekend Assignment #366: You're Doing It Wrong
Tell us about a mistake you made: directions botched or misunderstood, minor disasters suffered because you did something incorrectly. I'm thinking of problems with "Some Assembly Required" projects, maps misread and appointments missed, problems learning to use technology, etc., preferably with hilarious results!


Extra Credit: How good are you at giving directions, or teaching others to do something correctly?

I'm almost certain I had an amusing story lined up for this, but darned if I can remember what it was. The best I can think of right now is the time in college when I was supposed to meet my then-boyfriend at the corner of, I don't remember now the exact intersection, but let's say South Salina and Colvin Streets, which is almost certainly wrong. Whatever the agreed-upon intersection was, I was there with my friend E., maybe two minutes late at the most but quite likely on time . It was winter in Syracuse, after dark, maybe 7 PM. We waited, peering out into the night, staring at every car that went by. No Bob. Remember, this was over thirty years ago: no cell phones or pagers or email providers were available to facilitate communication. All we could do was wait, or abandon the spot and go look for a pay phone.

After 45 minutes or longer, we finally decided that one of us would continue to wait where we were while the other checked out the other apparently deserted parking lots at the same intersection. If I recall correctly, that was how we found Bob, and boy, was he mad! We had all been right where we had said we'd be, but missed each other in the dark, simply because it didn't occur to Bob that we might be shivering in the cold in the grocery store parking lot on the northeast corner of the intersection, not warm and safe in the bar on the southwest corner.

Many years later, John was to semi-duplicate this situation. My Mom and I were to meet him at Millie's Pancake Haus, and John was pretty sure he knew where that was. Only he didn't. I gave him the right intersection, but he either wasn't listening or assumed I'd gotten it wrong, and went to where it was in his faulty memory. Needless to say, he was late!

This would seem to imply that I'm not good at giving or taking directions. I'm not sure I'd dispute that. When I was in elementary school. we took standardized tests called the Iowas. My lowest score each year was the section called Map Reading. When I was an enurmerator for R.L. Polk in 1977, my favorite part of the job was getting lost on my way to or from the assigned addresses.

I'm pretty sure that tomorrow, instead of announcing the new Weekend Assignment topic, I will be announcing my retirement from this meme. After all, I've been participating in it for over five years, and doling out most of the assignments since John Scalzi left AOL a few years ago. Participation has waned, and it has become more of a chore than a pleasure for me. If anyone wants to take it over, please contact me and I'll gladly pass the torch.