My taxes are done at last! Are yours? 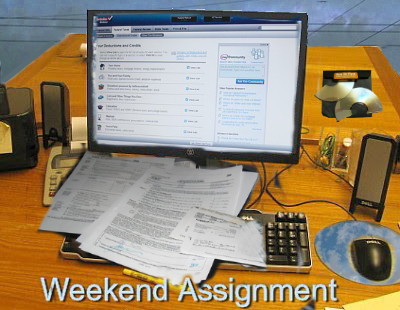 Weekend Assignment #365: Tax Time
What is your strategy for doing your taxes? Do you get them done as soon as you can get hold of the paperwork, put them off to the last minute, or something in between? Do you hire someone, do the work yourself, get your spouse to do it, or share the load? Do you mail forms or e-file?

Extra Credit: Have you ever had to revisit a tax return after filing, due to an audit or other circumstances?

On April the 8th I posted on Facebook, using a handy link from a software package I'd been struggling with for the past week. Here is what hit my wall:

Okay, so maybe it was a little crass to promote TurboTax that night, all things considered; but at that moment I felt like celebrating. I had gotten through all of the knotty problems of this year's tax return, and the refund was going to be better than expected, enough to rebuild the cash cushion we wiped out in January with the down payment on my KIA. John wants to spend it all on house repairs and such, but it's still good news. 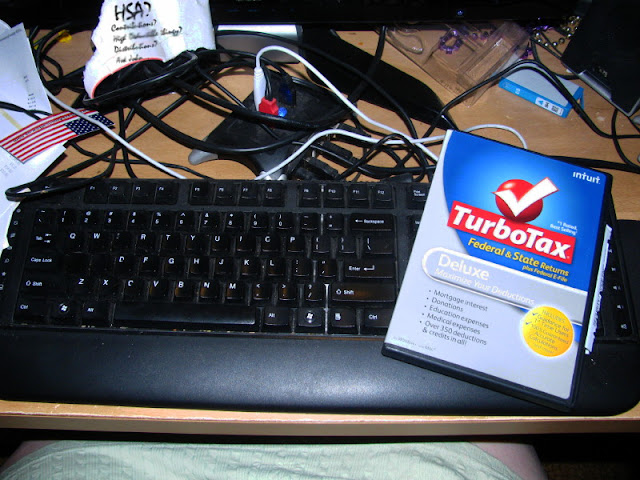 John was pleased about the refund, but less so about how long it took me to claim it. Even though I'm an accountant, and furthermore rely on my favorite tax preparation software, income tax preparation still intimidates me, almost every year. This year I was worried about the amended tax forms I got from First Magnus Liquidation Trust, and about the 40 boxes of donations to St. Michael's to sell at the English Faire, the dregs of which I hadn't finished cataloging after many hours of work on it. Plus I recently started working full time again, and had less time for chores at home. So I'd put it off until the very end of March, or possibly the first of April.

The First Magnus thing turned out to be far less intimidating than expected, but other issues more than made up for this. Wells Fargo had sold my student loans, which made it hard to find out how much I paid in interest on them last year. The screens about John's Health Savings Account asked about stuff I'd never heard of, and I ended up going through them over and over until they made sense to me. And I did a certain amount of wrangling and negotiating to get John to produce some of the info I needed to finish. You see, for the first 20 years of our marriage, John either did the taxes or hired an accountant because of the business he used to co-own. When I was partway through my accounting degree, John declared the taxes my sole responsibility from then on. He finds them stressful, too, and doesn't want any part of the process except the spending of the refund.

Still, John did get the answers I needed about his HSA and other insurance, the e-file has been accepted by the IRS and the state, and the money should hit the bank in another week or so. Hooray! Now all I have to do is get the 2008 amended return into an envelope and mail it. That's nothing compared to what we went though one year, over taxes we thought were over and done with. Somehow we thought the CPA had mailed in our tax return that April, and he thought we had done so. The IRS eventually got in touch, wanting to know where it was! The CPA wrote a letter, we sent it in and everything was fine. But we're not making that mistake again!