For Weekend Assignment #363: Scammed!, I asked, 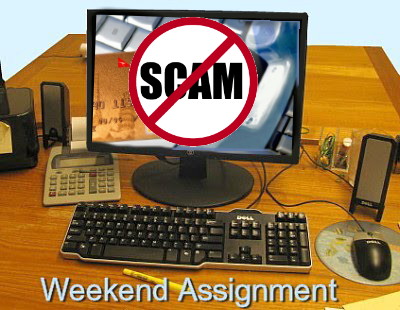 Have you ever been successfully scammed? Was it a phone fraud, a phishing email, a trojan worm, or something else? How did they fool you, and what have you learned from the experience?

Extra Credit: Tell us about a scam that didn't succeed in tricking you.

I think I was hit by a Facebook worm once, and an AOL phishing scam years ago (well, it would have to be years ago, wouldn't it?). My credit card issuers get hit more often than I do. On numerous occasions in the past several years, a bank has sent me a new card and a new card number long before the old one expired. It almost always turned out that the bank was worried that some credit card database had been hacked. On several more occasions, a bank called to ask whether I really spent money outside my usual spending patterns, or I noticed something I didn't authorize. Sheesh.

But scams can be much more interesting than that. Last week, a guy with a heavy Asian (India/Pakistan or something) accent call the land line here, claiming that "Your computer has a virus." Which computer? Mine? John's? The iPad? I didn't ask him that, though. "Go to your computer and let me show you," he said. Yeah, right. First of all, the land line interferes with my internet connection. It's not supposed to, but it does. Second, this guy has not told me anything that indicates he knows anything about me or my computer whatsoever. He has not used my name, identified the operating system, mentioned the presence of more than one computer or the broadband connection, etc. Third, if someone could somehow detect that your computer - yes, yours! - had a virus, wouldn't the logical way to contact you be online rather than by phone? Fourth and finally, I have both Norton and McAfee. If they can't protect me, no random guy on the phone is swooping in to save me.

So I told the guy I wasn't going to take his word for anything or give him access to my computer, and I hung up on him. Then I did a little research. Apparently there are companies that claim you have viruses, and install something on your computer that shows you these alleged viruses, in some cases leaving a big warning on your screen that you can't close. Then they tell you that Norton and other companies can;t help with this, and sell you something to save your computer from this thing they just caused, which according to what I read doesn't work. Nice, huh? And I'm not convinced that any of this is a virus in the usual sense. When I was Googling for images to put in this week's Weekend Assignment computer screen picture, I found a picture of a window reporting the presence of viruses, or something. (I didn't save the image, for reasons that will soon become clear.) When I clicked on it from the Google Images search page, it took me to a little dialog box that quickly started racking up the count of alleged viruses on my computer. I closed it after a few seconds, and Norton hasn't found anything since then but tracking cookies. My guess is that the thing was a very realistic animated gif, designed to show anyone and everyone that their computer is infected, and desperately needs the scammers' solution. But it was still pretty alarming!

There's one other telephone scam I heard about recently from a friend with Fibromyalgia and other health issues. Arizona voters recently passed a medical marijuana law (again), and my friend is interest in pursuing this for pain management. Although her doctor has already approved her for this, a naturopathic doctor's office has been trying to pressure her to pay him $150 for an appointment to obtain eventual access to medical marijuana. My friend initially made an appointment, checked with her own doctor, and did not go to the other alleged doctor. She further called the state's consumer protection division to alert them of the probably scam, but apparently the woman on the phone was disinclined to investigate, since my friend was not actually out any money.

So, tip of the week: if someone calls you up wanting to help you clean up your computer's viruses or get yourself some medical pot, don't believe them!