Weekend Assignment #361: Giving It Up! 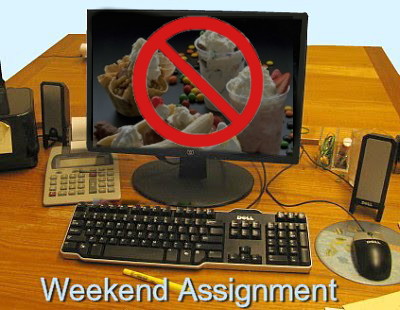 Lent has begun, and in certain denominations, people are "giving up something for Lent" - in other words, not indulging in some pleasurable food or activity between now and Easter. Have you ever abstained from something for a period of time for a religious or spiritual purpose? What was it? How successful were you at avoiding it?

Extra Credit: Regardless of whether you believe in doing so, if you were to give up something you enjoy between now and April 24th, what would it be?

For years, Father Smith at St. Michael's has sort-of advocated against "giving up something for Lent," suggesting instead that one do something positive. Some years I've made a special effort to read specific parts of the Bible, catch up with my webmastering duties for church, do some kind of volunteer work, or some other attempt at a Good Thing. Often, though, I fall back on the same kinds of Lenten sacrifices that many folks do. I've given up, or tried to give up, a number of things over the years:

Mahjong. One year, I gave up playing Mahjong on the computer for Lent. It was one of the games on a Disney Mulan software package, and I'd become quite addicted. Giving it up cold turkey was a really good thing to do. Did it bring me closer to God? I'm not sure, but I certainly don't regret my choice that year.

Ice Cream. Okay, this one is not very original. I think I held to it pretty well, though.

Carbs A disaster. Trying to lose weight in general, or do a low-carb regimen, has never worked for me during Lent. Maybe it's too ambitious - or maybe, that's more about doing something for myself than doing something for God, and not applying any discipline or motivation. I'm not likely to try this one again. Not at Lent, anyway. Now, a New Year's Resolution, on the other hand...!

So what am I doing this year? I'm giving up french fries. Yes, it's seriously unoriginal. Thing is, though, I hit fast food and hamburger places fairly often, and it's all too easy to automatically go for the combos. I'm not even that big a fan of fries, so why do I get them? Well, for now I'm not getting them any more, and at least trying to make this a sacrifice rather than a self-serving thing. I'm not sure how to do that, to be honest. Also, I accidentally ate one french fry the other day.

But I'm trying to do a positive thing, too. I'm taking over the church newsletter, The Messenger. I'm a little nervous about it; it's been more than a decade since I last edited a newsletter. But I'd better tackle it soon: it's due out in two weeks!

See also: beliefnet: What I'm Giving Up For Lent