Weekend Assignment #311: What is your favorite kind of cheese and why? Do you have it often, or just occasionally?
Extra Credit: Is there a kind of cheese you hate?


John Cleese would find my answer a fairly obvious one: 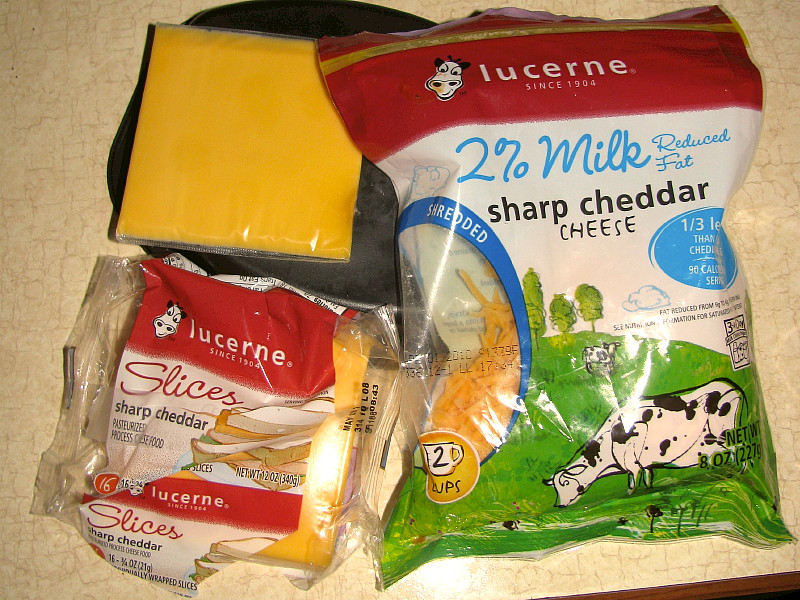 Yes, for me it's cheddar. I like it sharp or medium or mild, cold or melted, sliced, shredded or in hunks. I even like the processed almost-cheese slices of the ersatz Cheddar variety. I have it by itself, or on pasta, in sandwiches and on salads. I seldom eat chili without cheddar on top or mixed in. There's a Mexico-based taco chain that I get annoyed with whenever I'm there, because cheese for their tacos costs extra. It adds flavor and sometimes texture and body to a food, and cuts the spiciness when something is marginally too hot for me. It's versatile. For me it just works, you know?

Also, cheddar doesn't have the problematic properties of the many types of cheese I avoid. I know it's foolish, but I can't stand the idea of moldy cheese, even cheese that's meant to be moldy, such as bleu cheese or Gorgonzola. (I also dislike the actual taste of bleu cheese.) I don't want stinky cheese or runny cheese. There are some semi-soft types I like just fine, and soft cheeses such as cream cheese and Neufchatel, which used to be sold in a juice glass. To be honest, I'm not even fond of Swiss or provolone. Parmesan, Romano, mozzarella, ricotta, those are all great. But cheddar, for me, tops the list.

How about you? Are you a cheese connoisseur, or do you stick with the popular stuff? What is your favorite? What is your unfavorite? Tell us in your blog or the comments below, and if you do a blog entry about it, please remember to link back to this entry. Your deadline is Wednesday, March 24th at 6 PM Pacific time, after which Carly and I will be back with a roundup of your responses. Something like this:


A little way past the Molino Basin campground on the left was a dirt road leading to a set of ruins, basically just the road and some stone foundations. Eventually I found out that the site was once a prison camp. Really, the name "Prison Camp Road" should have been a vital clue. I remember being out there once in 1986 or 1987, looking for birds and other critters, and listening to some odd, unidentifiable noise out there. Was it insects? Or something else? It sounded almost human, but I swear I was the only one in the area that day.


All these years later, I've been wanting to check out that prison camp ruin again, and see whether it's as I remember it. Funny thing, though - there's no longer a sign for a Prison Camp Road. I was watching for it last April when I took the dogs into the mountains, and I was looking for it again this weekend. I thought I must have just been unobservant and missed it. Now I know better.

In 1958, the site became a youth rehabilitation camp. The young prisoners there, whose labor was considerably less strenuous than their adult predecessors, sometimes spoke of a young man who was sometimes seen in the area, shouting a warning when kids strayed too close to the ridge. The camp closed in 1973, and the buildings were razed. The last reported sighting of the Prison Camp Ghost was [in 1999]. The hiker who saw him said that he smiled and waved, and then faded into the desert scrub.

Gordon Hirabayishi did not die in the Catalinas in a tragic accident, and there is no ghost. The "Catalina Federal Honor Camp" was established in 1939 in belated response to the suggestion of former Postmaster General Frank Hitchcock (who had died in 1935). It was meant to conveniently house the prisoners who provided labor to build the Catalina Highway, construction on which had begun in 1933.

And if you believe all that, you didn't read this entry very carefully!

Hi Karen,
Great Assignment this weekend. Mine is posted. Have a great weekend!

I almost forgot to leave my link - my Assignment posted yesterday: