Weekend Assignment #309: Get in Line!

It took me a while, but I came up with a Weekend Assignment that relates to the Doctor Who convention I just attended without getting too obscure for everyone else:

Weekend Assignment #309: Nobody likes standing in line, generally speaking, but sometimes you have to wait around to get what you want. Are you one of those people who avoid lines as much as humanly possible, even if it means doing without? Or do you accept the need for queues, and simply try to make the wait as painless as you can?
Extra Credit: Do you see the problem of waiting in lines as getting better or worse in recent years?

As I may have mentioned before, my husband John is an absolute line-hater. He will avoid most restaurants because he can't stand the wait to be seated, and barely tolerates the lines at Disneyland, a place he loves in other respects. Lines stress him out and make him cranky.

But I'm not too bothered about lines myself. I won't go so far as to say that they are actually fun, but many times the prize at the end (a steak dinner, an autograph, a driver's license renewal) is worth the tedium. At Gallifrey One last weekend, I waited in all six autograph lines, two each on Friday, Saturday and Sunday. At the end of each wait was a row of tables, filled with actors, writers, directors, an artist or two and a costume designer. Each Doctor Who celebrity was armed with Sharpies and a silver marker to sign your photo, book, magazine or what-have-you. There were a few people whose autographs I didn't ask for, mostly people who wrote or illustrated books or comics I haven't read. But I tried to say something friendly and intelligent to everyone, and to come up with as many appropriate items to sign as I could without going completely overboard on my purchases. 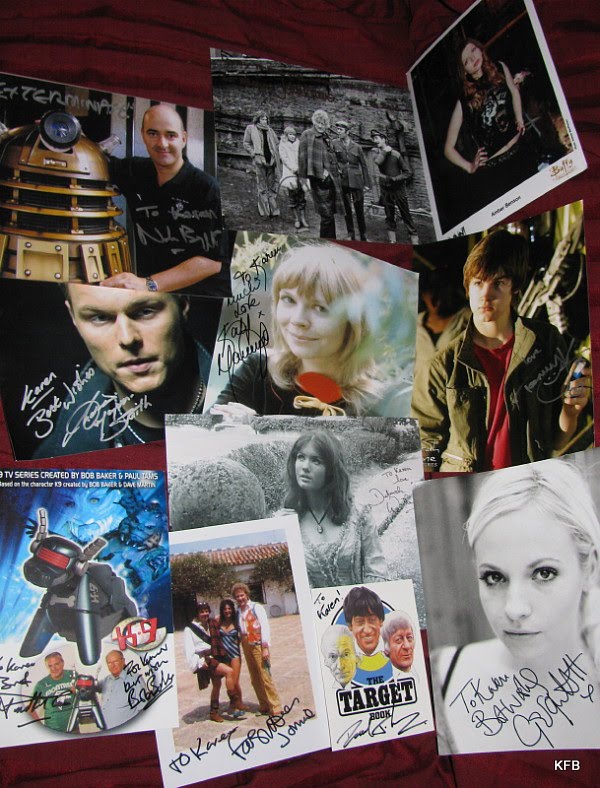 Above you can see the signed photos I ended up with, but they're just the souvenirs of the overall experience. For me the real hook is to have a brief conversation with people I would not get to meet otherwise. I asked Louise Page about the ripping of the Tenth Doctor's suit in "The End of Time," since it was one of only four brown suits made and irreplaceable. She confirmed that it was a wrench to half-destroy it for the shoot. I chatted with Nick Briggs about the on-screen character in Torchwood, and showed Deborah Watling what I wrote about her character Victoria on the back of her Cornerstone trading card back in the 1990s. And so on. I could not have done any of that without standing in some rather long lines. 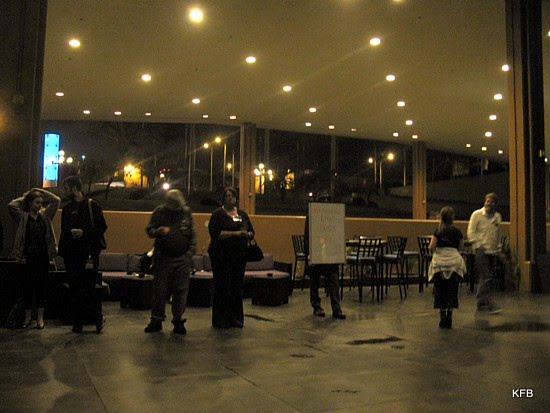 The end of the line to be seated for the Masquerade. It wound though
the corridors and out onto this patio, where it had been raining.
I was lucky: I got to sit on a wall, under a giant leaf.
Still, there are ways to make lines go a bit faster. For quite a few years now, Disney has had a system called Fastpass, which gives you a ticket to return at a certain time rather than wait in line from the beginning. You still end up in line, but not as long. This year, Gallifrey One instituted "Flyaway Autographs" on a similar principal. Show up at a given time, and you got a ticket with a group number on it, based on when you show up and how many people were ahead of you. Then you could go do something else until the session started, or even a little while after the session started. But the convention had over 1500 attendees this year, nearly double what it had to accommodate for most of the con's history. There was no way to get that many people through the autograph lines without a protracted wait, even with the flyaway system.


And there are things the person in line can do to make the wait less tedious. I'm pleased to say I overcame my shyness enough to chat with a number of people in line this year. In the line to be seated for the Masquerade (costume contest) I was reunited with a woman who, like me, failed to connect with the group on fans making an run to to In-N-Out Burger on Friday night. She in turn with taking to someone about Chicago schools - not a thrilling subject for me, but it was something to pass the time. In the autograph lines I was one of a number of fans who were quite impressed with something one particular guy was getting signed, a Hard Rock Cafe shirt with over 100 Doctor Who-related autographs dating all the way back to 2000. It was fun to listen in as he talked about who was on the shirt and tried to identify some of the less legible signatures.

More on the convention in my next entry. Meanwhile....

For Weekend Assignment #308: Chick Flicks Or Guy Movies?, Carly wanted to know what kind of movies we gravitate toward. Here are excerpts from the responses. Click on the name to be taken to the person's blog and read more.


I think in our house the choice of movies is pretty evenly split. Way back before Alan and I started dating, back when we were best friends, we made a deal to alternate which movies we watched. It's a custom that we still do to this day. Although, there was one recent exception... I couldn't get him to go to the theater to see the Sex and the City movie a couple years ago. Nope. No way. Not gonna do it! LOL. I didn't push, but man I wanted to see that movie. When it finally came on HBO, Alan did graciously agree to watch it with me, and he actually enjoyed it! LOL. I knew he would.


Worst movie EVER - Disney's Fantasia ... First movie (and only one of two) that I have ever WALKED OUT on.

As for Chick Flicks and Guy Movies, I'm a big fan of both. Love action/adventure as much as romance.

I love Against All Odds, Overboard, Ever After, Shakespeare In Love, The Bourne series, The Net, War Games, Fast & Furious ... way too many to mention.


It's interesting; my reading interests tend to women-centric, but when it comes to movies, I'm really not all that much for the Chick Flick. ... Basically, I prefer movies that aren't strongly marketed to one gender or the other, and my husband feels the same way. Most of the time, we agree on the movies we want to see, and that does make things a lot easier.


Yes, I'm a fan of action flicks and Sci-Fi flicks. Mixing the two together is ideal, but it doesn't always work. I can list all the movies that I've seen that mix these two and end up being terrible. I will still watch them, but they are bad, bad movies. Look, Armageddon is a load of garbage, but I'll still watch it when it comes on. Maybe I think that one time when I watch the movie it will magically be better. Also, I like to laugh at it.


Of the two general categories in the assignment title, I suppose I must choose chick flicks, but really, that's not how I classify films or what I look for. ... If you think about it, the Peter Jackson-directed Tolkien films are both chick flicks and guy movies, having the romance between Aragorn and Arwen (and the love triangle with Eowyn), and lots of battles and fight scenes. It's even a buddy movie, with the two pairs of hobbits and the friendship and rivalry between Gimli and Legolas.


The worst movie I ever saw was Master of Disguise, starring Dana Carvey. My son thought it was great, but I got tired of the recurring fart jokes.

OK, sorry, I didn't actually answer the question. We're solidly on the guy movie bench here at Casa AWV. Fav movie is probably the Lord of the Rings trilogy, and we also have the Star Wars films and the Indiana Jones movies in our DVD collection. We're also huge Disney animation fans. Unfortunately, almost all of those we used to own on VHS and we sold them at a garage sale because we never watched them any more.

Come along with us now, and tell us what you think about standing in line. Here are the guidelines:

Got it? Good! See you over on Carly's blog Ellipsis next Thursday for a roundup of this Assignment and to read what the next one is.

And don't forget our other memes:


The Round Robin Photo Challenges.
Next Challenge (to be posted Saturday, March 13th):
Round Robin Challenge: Look Up/Look Down

Come play with us, won't you?

Here's my take on things...