I actually posted a completely different Weekend Assignment earlier today, but for reasons you'll see next week, I was jumping the gun with my topic. Starting over:

Weekend Assignment #267: On Tuesday, John and I will have been married to 30 years. If you're old enough to remember the late 1970s, please tell us what you were up to way back then. If not, pretend I asked about the late 1980s. If you're too young to that, I'll be very surprised, but go ahead and tell me about your life in the late 1990s!

Extra Credit: What, in your opinion, was the best thing about the 1970s, if anything?

May 19th, 1979 was exactly one week after my supposed graduation from Syracuse University, and my last day as a resident of metropolitan Syracuse, NY. I had been living in a studio apartment in an old house on Westcott Street, with a puppy named Jenny and a perpetually large phone bill from calling John in Columbus Ohio. Although I'd attended graduation the previous Saturday, I actually had four or five incompletes in my courses, all in my major, English. I later completed the requirements for the Romantic Lit course, only to discover, years later, that the professor never turned in the revised grade before retiring.

In 1979, I was completely stuck on my first novel, still called The Tengrem Sword; I couldn't seem to break through past page 70. I had been dieting my way into the wedding gown my friend d was making from a Middle Ages-based pattern. I allowed myself one Hershey bar a day, and yes, I still made my weight goal. 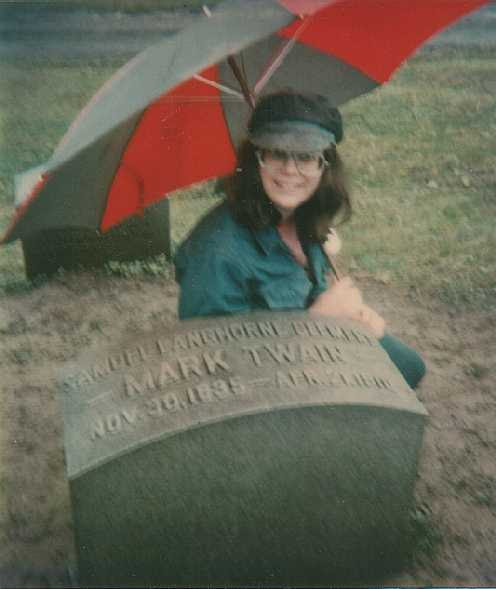 John was in town in the run up to the wedding, and so were my mom and John's mother and sister. The rehearsal dinner was at Faegan's Pub, which specialized in quiche and salad. I no longer remember whether it was on the wedding day or the day before that someone's car was accidentally locked with the keys inside. I was the one who calmly phoned a locksmith.

Music at the wedding was Mozart, played on an organ. I don't think there was music at the reception. If there had been, it would have been the Beatles, the main area of musical agreement before John and me.

After the reception we drove off in John's 1964 Ford Falcon van, which had a leaky transmission. Our honeymoon was spent at rainy state parks in New York and maybe Pennsylvania, trying to light a campfire. One of the stops was the grave of Samuel Clemens as you can see to the right. The denim jacket was my big purcase that spring. I arrived at the reception with this jacket over my wedding dress.

You know, culturally, I was never that fond of the 1970s. I hated disco, the Beatles didn't get back together, and the clothes and hair...well, I did like my light blue jeans with all the extra pockets, but that's about it. I suppose the best thing culturally was the return of Star Trek as a series of movies, even if the first one was a bit of a dud, and the first Star Wars film. For me personally, though, the best thing was going to a writer's workshop in 1977, meetings a guy there, and ending up married to him less than two years later!

How about you? Do you have any personal or cultural memories of the era, or the decade after that? Tell us about it in your blog along with a link to this entry, and then leave a link to your entry in the comments below. I'll be back in a week with excerpts from your responses. Like this:

For Weekend Assignment #266: TV That Mattered, I asked whether there was a tv show from your childhood that you remember especially fondly. Here are excerpts from the replies.

my son saw the new [Star Trek] movie and said he was very pleased with it! This from a big original trek fan (plus all that followed).

by the time Trek came on tv I was already married with kids! In my day the only thing kids got to watch were mainly westerns like the Lone Ranger and Gene Autry.

WKRP in Cincinnati made me want to work in the radio business. I thought I wanted a program-director's job like Andy Travis', but I think what I really would have liked was a position more like music director. WKRP was one of the first shows I remember that used current, recognizable music regularly as part of the show, but its selections weren't entirely true-to-life - many of them were much more likely to turn up on music-focused FM stations than on AM ones that still included farm reports in their programming. Obviously, my career didn't go in that direction, but my continuing interests in the business sides of both the radio and music industries can be directly traced to WKRP.

Star Trek is probably the obvious choice, so I'll skip that one and go for The Twilight Zone. That is one of the few prime time television programs that I remember from my early childhood, other than Gunsmoke. It was a show that stuck with me, though, and even as a child I appreciated the good storytelling.

Mike said...
One show I watched all the time, and still do, is M*A*S*H. Since this show was on forever I watched it as a combination of reruns and first run episodes. I clearly remember recording (on a Betamax!) the finale for my mom since it was her bowling night. I believe I was in eighth grade then, so it was okay to leave me alone, don't go calling the cops on her.
I'm still dangerously low on "guest professor" suggestions for these Weekend Assignments, so I ask again: please, please, please, PLEASE PLEASE PLEASE PLEASE email me some new ones. I warn you, I will continue adding another please to the previous sentence each week until someone suggests something. Save us from the invasion of the pleases!

I may have an example of the nerdiest pickup line ever! http://www.barrettmanor.com/julie/archive.aspx?ID=2580

Happy Anniversary, Karen and John! My life, 30 years ago today.

Here's what I was doing 30 years ago.