RR: Spring at the Side of the Road

Turns out that it's much easier to find flowers growing outside, in March, in Tucson, when one has a car and can drive all the way across town in broad daylight, than it is after midnight or when one is sitting inside a building all day while the car is someplace else. Here are the pictures I could not begin to get on Friday or Friday night: 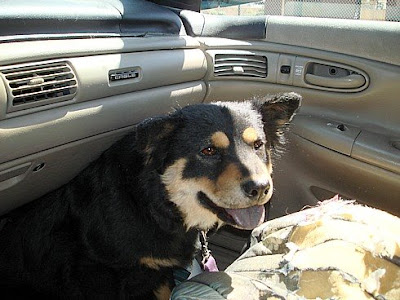 Today was a busy day. We took the Newdog to the vet, all the way across town. Before we left, John agreed to give her the new name we've been playing with for a few days: Pepper. Sara, who suggested this name, wins...well, something cool, when I think of it.

She really, really did not want to go in the car, but was much calmer on the trip home, having seen other dogs without being caged or deserted. The surprise of the day: on the basis of her teeth, Dr. Lloyd says Pepper is closer to four years old than the two years SAFE estimated. This caused us to speculate on her unknown early life, probably as an outside dog who escaped long enough to get pregnant. (She dug her way out of the yard again yesterday.) I said something about her gypsy wanderings, and she pricked up her ears at the word gypsy. Too, late for that name, doggo! You're Pepper now!

We've got medicine to treat her skin condition, starting tomorrow. But she may need her thyroid checked. 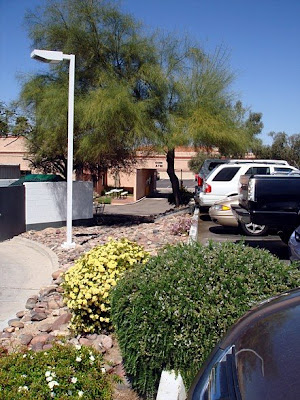 The Brake Masters garden
After the vet, we drove all the way to Ina and Oracle to pick up John's car. There I found all these flowering shrubs, and a palo verde tree just beginning to bloom. However, for all I know, these bushes could have been blooming a month ago, helped along by wasting precious water on non-desert plants. 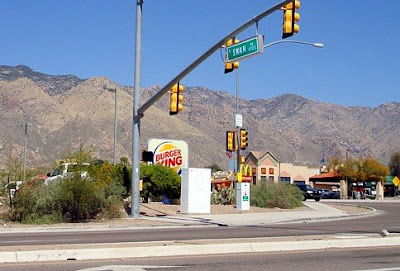 I think that I shall never see
Mount L. enhanced by Mickey D.
And blooming shrubs just block my view;
Oh, what's a mountain fan to do? 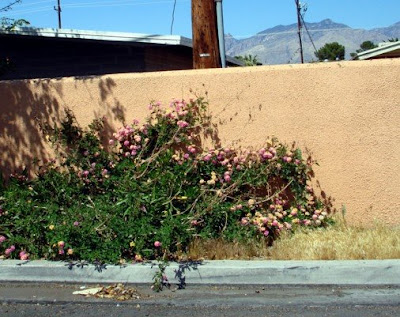 This was behind a McDonald's (different one) - or possibly behind the Walgreen's next to that McDonalds. 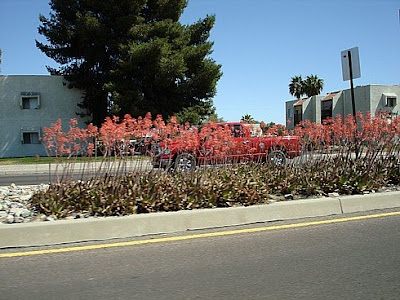 There were several stretches of this flowering agave or aloe or whatever it is on median strips on and near Craycroft Rd. I don't like 'em much, but at least they're real desert plants. 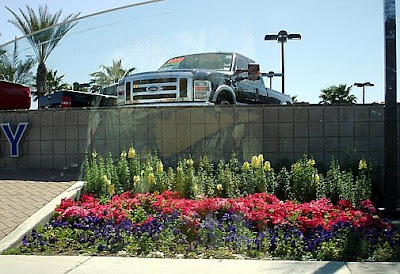 This garden in front of a car dealership could almost as easily be my mom's old garden in Manlius. Again, there's no guarantee that this is particularly a spring phenomenon. The harsh truth is that I don't like flowers, not even a little bit. I therefore tend to ignore them. 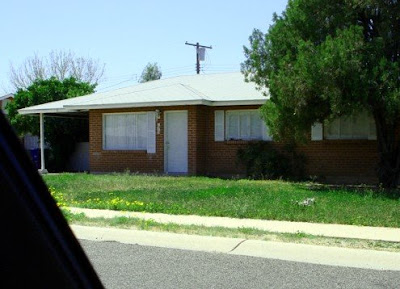 Okay, these flowers in a neighbor's yard are a genuine sign of spring. They probably came up on their own. 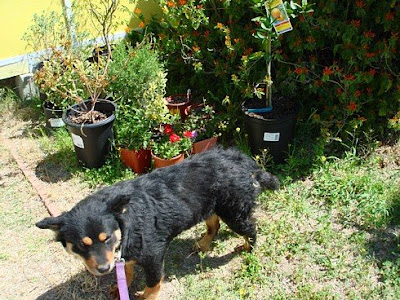 Our own yard has the hummingbird firecracker bush, which blooms all year, plus the "dead" bougainvillea and some potted plants John bought, last fall and this spring. Most of the purchases are not currently in bloom. The one new plant I actually care about is a tangerine tree.

All, in all, I have to admit that I was mistaken last night. Tucson does have a spring. It's a short one, and artificially aided by the watering of non-native plants; but it does exist.

Pepper.... I like it! Nice choice, although Gypsy would have been nice also ;p

Pepper is a good name, though. I've been away, so I've missed all the excitement about you getting a new dog. Give her time... sounds like she's had enough time before you found/adopted her to pick up some habits and skills that you may not find likeable (like digging under the fence and running away). You and John have the patience, and big hearts. I'm down to one dog myself, as you know. She's much quieter than Max ever was. It's taking some getting used to. I'm not ready to bring another dog into the house just yet, as much as I miss the Big Max. The entire house/home feels different without his presence, without the sounds he made (barking at the squirrels, talking in dog growls, walking, collar jingles, scratching at the door, etc). I hope Pepper is willing to ocmpromise with you, I hope she fits into your lifestyle. She's a prett dog. bea

It's amazing to see all these flowers blooming out there, when all we have so far are a few embattled crocuses. It's nice to know it's spring somewhere!