Fabulous, Freaky Sentinels of the Desert

It's Round Robin time again! This week's topic, "Fabulous Freaks Of Nature," comes from Meg, author of the blog "In Quest Of." 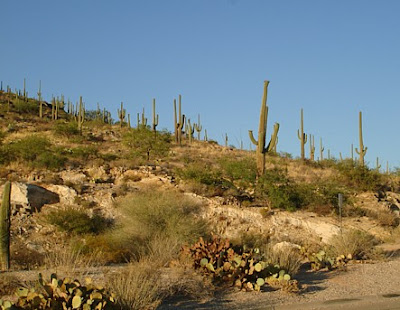 Well, I don't know any six foot frogs, six-fingered friends, or dogs with no noses. But I do live in the Sonoran Desert, within easy driving distance of whole forests of a large, strange plant that most of you have never seen outside a Roadrunner cartoon: the Giant Saguaro cactus. 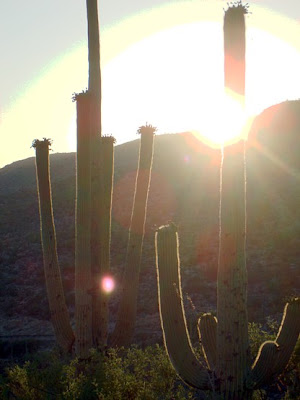 For a while now I've been feeling a need to get out of the city into the real desert, even if only for half an hour. From my part of town, the easiest way to do that is to drive up Tanque Verde, turn left on Catalina Highway, and head a little way up Mount Lemmon. 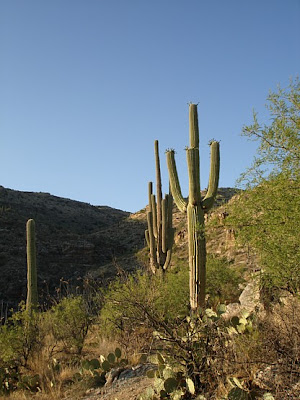 The first scenic vista, Babad Do'ag (which means Frog Mountain), is only about four or five miles up. Two years ago, I took some of my first digital sunset photos up there with the old Canon camera. So that's where I headed after work today. 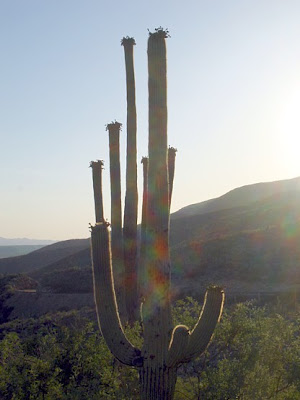 Sunset comes a little earlier in the mountains than down in the city, and there were several couples waiting for it. But when it came, there was no color in the sky. Still, I got some interesting pictures. I especially like the backlit shots, which I did by lining up the sun behind the saguaro itself. 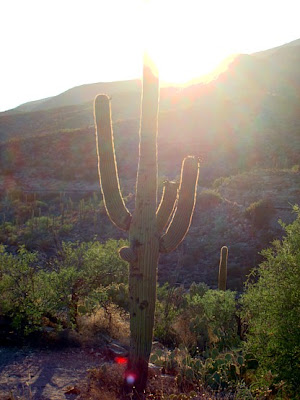 One freaky thing about saguaros, though, is the way people like to anthropomorphize them. They turn the arms and cavities into approximations of human features, and imagine funny things the saguaros seem to be saying. This one, for example, sort of has what looks like a face right in the middle: eye, bulbous nose, mustache and mouth. The arms could be a big green jester hat. But I've always hated that sort of thing. To me, a saguaro is a saguaro. It doesn't need to be a "funny animal" figure. 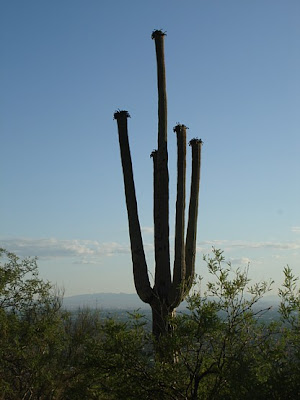 This shot is off in a different direction from the previous two; hence the different lighting effect. 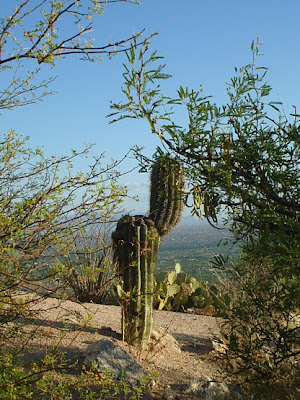 But enough with the pictures for the sake of pretty pictures. Let me show you a few things about the saguaro life cycle. This little saguaro is probably over 75 years old. That's how long it takes for them to get from the size of a pinhead to the point of starting to grow arms. This one is a little unusual; they're usually a bit taller than this (around seven feet) before they start growing arms. Saguaros can live 175 years or longer, and grow to be 50 feet tall. 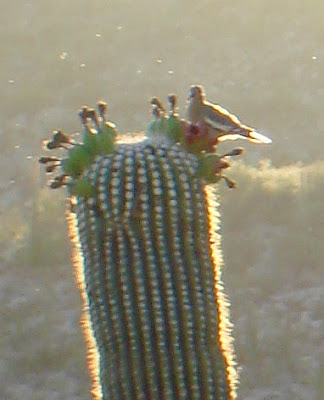 The saguaro flowers at night, and later produces these weird fruits at the top of each arm. The Tohono O'odham people (and the Hohokam before them) have traditionally harvested these, using poles to knock down the fruit and then making it into jam, syrup and wine. But humans are only one of the many creatures to feed on saguaro fruit and seeds. This white-winged dove was definitely having a nosh tonight. 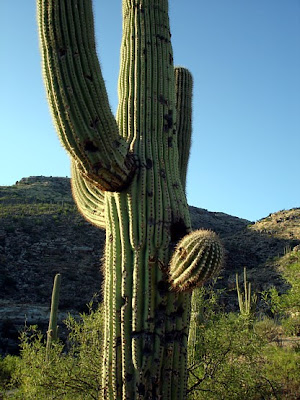 The saguaro can also be a kind of apartment complex for birds. Gila woodpeckers and flickers often drill holes in the saguaro to form nests. The saguaro lines the hole with kind of a woody scab, forming what's called a saguaro boot. After the woodpeckers are done with the hole, other birds move in, especially owls. Bats and bugs may also live in saguaro boots. 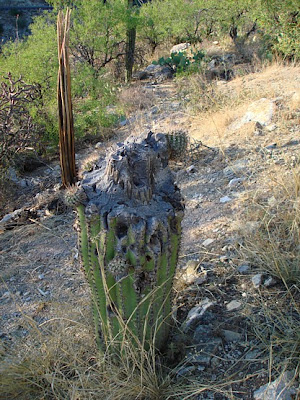 Here are two views of what's inside a saguaro. The damaged one in the foreground is showing saguaro gall, and possibly saguaro boots, both of which are ways to heal the plant and seal itself off from damage. The brown sticks in the background are the remains of another saguaro. These are called saguaro ribs. They're the main structural support for the plant, and they and the boots are what's left after the cactus dies and rots away. The ribs are often used to build fences and ramadas and such. 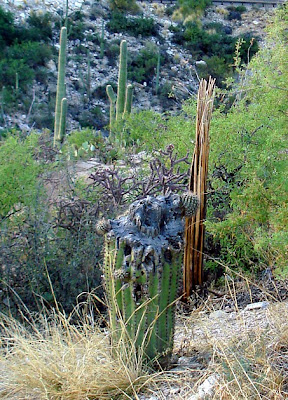 That's it! Now go see what everyone else came up with for this topic! And remember, you're more than welcome to join in the fun!

Meg - POSTED!
In Quest Of
http://journals.aol.com/inquestoftruth/InQuestOf

Teena - POSTED!
It's all about me!
http://purple4mee.blogspot.com/

Absolutely lovely. You have such good lighting on these. The one with the dove... perfection. It has a deep ethereal quality to it. :)

I just also wanted to express my appreciation of these saguaro photos . . . wow, gorgeous.

These are cool, good choice for freaks of nature....Ü, but maybe very common to you~

Thanks for stopping by mine!

I appreciate all of the excellent pictures and the knowledge you have shared in the descriptions here. Cacti are fascinating to me and you made them even more so.

Thanks for the education on saguaro cactus. Pretty things and I'm amazed by the age sign of the arm. They are freaky. Love the way the light creates a halo around the edges.

what absolutely awesome pictures! Thank you for sharing :-)