Whenever I write about an encounter with Black Rose Kate, as I did last night, I get a little worried that the casual reader will think I've completely lost touch with reality. You do know better, don't you? Well, don't you?

The odd thing about Kate and Ariel is that they are the only fictional characters I've ever created (aside from childhood, and setting aside for a moment the multiverse view of reality) who know I exist. I've never had a conversation with Rani or Cathma or any of the Mâvarin characters, even as a writing exercise in the privacy of my own head. Despite the fact that Mages of Mâvarin (and the serial Mall of Mâvarin, which probably isn't canonical) depicts characters traveling between different versions of reality, it's important to me that they be completely real within their milieu. To have them interact with me, their creator, would be to cheapen their verisimilitude. They would become like Bugs Bunny and Daffy Duck, talking back to the camera (or to Leon Schlesinger). "Breaking the fourth wall" is usually pretty amusing, and it works well for cartoon characters, the tv series Moonlighting and so on. But it also means that you can never quite suspend your disbelief in the world of such characters. If Bugs knows he's on a movie screen, then nothing around him can be regarded as real, even to Bugs himself. Mâvarin needs to be completely real to Cathma and Carli and Rani and the rest, so that they can behave naturally and the reader can believe in them. Any interaction between them and me would call that into question. Besides, they just don't have anything to say to me. 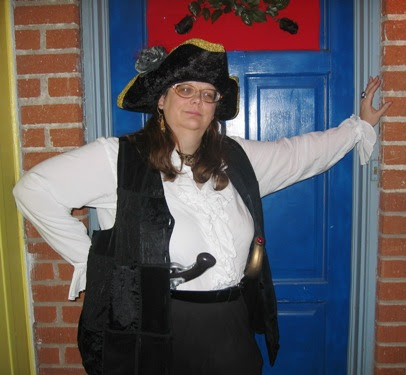 But Kate is different, and so is Ariel Allegra. Part of what's interesting about Kate as a character is her ability to be placed in a fish out of water situation (i.e. in another century) and thrive there. She is self-confident, observant and opinionated, which gives her the ability to comment on the modern world with an outsider's perspective. Having her interact with me, her putative creator, doesn't make her less "real" because the interaction is part of her backstory. The whole premise is that somehow an eighteenth-century pirate has managed to travel from a universe in which she's real and I'm not to one in which I'm real and she's not. Ariel, being theoretically the person who caused Kate to "visit" me in the first place, is entitled to pull the same trick. As the daughter of Joshua Wander, a character who travels between universes on a regular basis, Ariel can inhabit almost any version of reality without losing believability, as long as she behaves believably and consistently herself. She's not as effective a commentator as Kate, however, because she's seen too many versions of the modern world to consider ours all that strange.

Do I really believe in this multiverse, infinite timelines idea, the concept that makes it possible for Kate and Ariel to "really" exist in some universe somewhere? The best answer I can give you is that I do and I don't. Apparently there's a fair amount of support in the world of physics for the idea of an infinite multiverse, where every possible variation is played out. But I never took physics in school, and I've never quite been able to grasp the technical explanations. Nor do I really like the idea, taken to its logical extreme. If every single possibility is played out, then every time I do something good, some Karen somewhere is doing something bad (and another one is doing nothing, and one is doing something even better, and one is doing something even worse, and so on). At the macro level, an infinite multiverse is a zero sum game. If every possibility must be played out somewhere, then free will is problematic at best.

Also, "every possibility" does not include impossibilities. If all universes obey the same scientific principles, then none of them contain real wizards, or talking rabbits in planes that stop falling when they run out of gas, or tengremen, or time traveling sports cars. Phooey on that. I prefer a more limited and freeform multiverse, where anything we create as fiction can and does exist in another version of reality, and other possible realities don't necessarily exist. I can't justify this idea scientifically, and I'm not sure I really believe it's true. But my fiction is predicated on it.

So I hope you don't mind if I indulge in this conceit from time to time, and talk to the few fictional characters who know I exist. That is, after all, what they're here for.

strange how some characters we make become so real to us... maybe it's wishful thinking?

you gave me an idea for my post today.. something i hadn't thought of in years!

Personaly I enjoy hearing about your conversations with fictional characters. However I am beginning to wonder if they really are fictional, maybe they started out that way but are real now?

You call into question, for me, the very foundation of fiction. Perhaps there is no real fiction. We could be unconsciously linked to another version of reality where what we imagine is really just a bleed through the fabrics of reality.