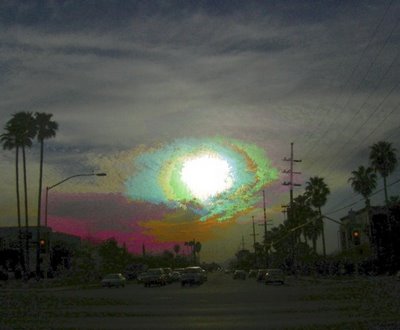 Is it me, or has something odd happened? I've felt kind of strange ever since taking this picture of, well, I'm not quite sure what it was. Weird weather? A vortex? Just the sun through the clouds?

All I know is that I saw this bizarre patch of sky as I looked west down Fifth Ave late yesterday. So I took the shot. Ever since then, I've had the opposite of deja vu. Things that should seem normal just...don't. Romana and Alex keep catching me staring at them, as if I haven't long since memorized every contour of the twins' five-year-old faces. Ro even asked me if I felt all right. She's a smart one, that little girl. So is her brother. He thought maybe there was something on his face. It turned out he ate all the diet Jello, except for the lime one that he spilled on himself.

That's not the only weird thing. I keep getting the urge to work on the manuscript of Mages of Mâvarin, only to remember that it's already been finished and published. I had to go to my bookshelves, pick up all three volumes and handle them, to prove to myself that they were real. I can't get over what a great job Michael Whelan did on the covers, especially the one for Another Mâvarin.

Jon thinks it's lack of sleep that's making me act so weird, but I'm not so sure. Even he seems a little different somehow. I guess I'm just not used to Jon being so thin, but I should be. He got down to his ideal weight about a year ago, right after I started seriously working out.

I've had a theory for many years - well, not so much a theory as a story idea. But sometimes I half-believe it. I've noticed that things that are true in my dreams tend to be always true, in every dream. Dan is always dead but haunting me, and so is my mom. And in my dreams our house is always full of hidden rooms, just as it is in real life; but they're not the same rooms. I've always wondered whether the world of my dreams is somehow real, maybe in another dimension or something. Sure, there are distortions, because I'm there only in my subconscious, and I don't always remember the details. But maybe the core stuff, the part that's always consistent, is a glimpse of some other Karen's life.

Nah, it doesn't make sense, does it? It doesn't have to be real, just because it's consistent. It could be like Mâvarin, just another "fig newton" of my imagination, except that this one I've built in my dreams rather than on the page. It's probably the fact that I'm so sleep deprived that's causing this unreal version of my life to intrude on my waking one, confusing me with false impressions of being childless and not having sold the books yet. Maybe if I get more sleep, my two beautiful children will no longer feel like strangers to me.

But that doesn't explain yesterday's sky....

Michael Whelan eh?.. I have one of his art books.. i think i became interested in his artwork when he did the cover for Pern's White Dragon.. I love Boris's work and Darryl Sweet also.. having one of those do a cover for you would be more then a dream!!

Ok 2nd attempt. From your symptoms, I'ld say a time warp. You look a little pale. Just hold on tight and get ready for the ride into the future! I hope I'm right and the sun isn't going NOVA!

Hey, I could get into this kind of thinking... I like the idea of you with five-year old twins! And the published novels... yeah, I can get into this fantasy... and then go make up one of my own. Karen, I think you'd have been my best friend if we had grown up as neighborhood kids! Bea