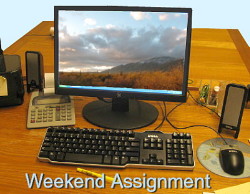 Weekend Assignment #313: Through some miracle of colliding realities, you have the opportunity to meet a fictional character, face to face. Which character would you most like to meet, and why?

Extra Credit: What question would you most like to ask that character? Extra extra credit for posting the character's likely reply! 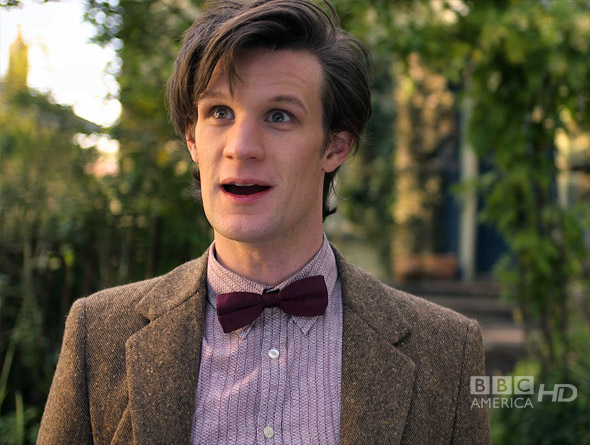 I have to confess up front that there's only one fictional character on my mind this week. On Saturday, April 3rd, Doctor Who returns to British television with the first full story to feature the eleventh incarnation of the title character, the Doctor. For the past week or two there has been a steady drip of trailers, teasers, weird radio promos, clips from the first episode (and oddly, the sixth episode, featuring vampires), interviews, photos and magazine cover stories in the British media. The Internet and Doctor Who fandom being what they are, nearly all of this has made its way onto YouTube, Blogtor Who and other websites, to be eagerly discovered by fans like me.

For those who have more patience than I, BBC America is the main source for Doctor Who in the US these days. Their website has lots of photos and videos now, all in preparation for the U.S. premiere of the new season of Doctor Who on BBC America on April 17th. But I won't be waiting that long to watch it.

So yeah. Heck yeah! I'd love to meet the Doctor. He is, in the opinion of many, the best character in the history of television. The man from Gallifrey with two hearts, a time traveling blue box, a sonic screwdriver and a genius for getting in trouble, is a potent combination of fictional archetypes and originality. He's the cleverest man in the room (some would say the Universe), the trickster, the wise old man, the fool and the nutty professor. He's not the Hero with a Thousand Faces, but he has had eleven of them, even more than James Bond. We've learned a lot about the Doctor in the 47 years since he first appeared on tv, but we still don't know his real name, and probably never will. ("Doctor Who" is not a name, but a question.)  It would be fascinating to talk to a character like that - or, more likely, to listen, because he would probably do most of the talking. As archeologist (and the Doctor's future wife?) River Song says in "Silence in the Library," he's "the only story you'll ever tell - if you survive him."

With every new face the Doctor changes slightly in personality, so there's still the question of which Doctor I would want to meet. I think I would go with the Tenth Doctor, my favorite. He's friendlier, and at the same time lonelier and more complex, than most of his predecessors. I suppose I would ask him about Gallifrey before the Time War, and whether there was a specific event that led him and Susan to leave home all those centuries ago. To be honest, though, I doubt I would get a straight answer. I suspect I would instead end up tagging along on some adventure or other - dangerous, but fun!

How about you? Would you take tea with Sherlock Holmes, or share a taxi with Tarzan? Would you meet Maid Marian, or Murphy Brown? Pick any character from any medium, and tell us why you'd want to meet him or her. Then come back here and leave a link to your blog entry about it. Here are the links to last week's Weekend Assignment participants:

For Weekend Assignment #312: Write A Culinary Review, Carly asked us to review a restaurant, a menu item, or even a recipe or packaged food. Here are excerpts from the responses:


The entree selections at Spark are primarily seafood and beef, with burgers, barbecue options, and jambalaya also offered. I've tried a few different things - and would love to try the jambalaya, but it contains clams and clams and I don't get along - but since this was my birthday dinner, I went for my favorite: the filet medallions. I don't eat red meat very often, and when I do, it's usually at a restaurant, so I tend to splurge. I splurged on my side item, too - the baked potato with bacon and Cheddar cheese. Again, it was my birthday dinner - and it was delicious!


I had made Low-Cal Biscuits and Gravy for breakfast, about 300 calories per serving. I made some biscuits which were generic "buttery tastin" and after breakfast I had about 5 left over, so I decided to make Berry Shortcakes. I had purchased some frozen mixed berries a couple days ago, with the intention of making some vinaigrette or possibly a topping for some ice cream. I decided to thaw them out but wasn't expecting them to hold up well, so I planned to make a hot compote. I was very pleasantly surprised to learn that not only did they hold their shape after thawing but they tasted as if they had just been picked! And there was very little liquid upon thawing. Nice!


This is the "Especial de la Casa," Arroz con gandules, Pernil y Pastel. This translates as "Rice and pigeon peas, roasted pork and pastel." The roasted pork is easy to identify, and rather good it was, too. The other two items on the plate were almost a treasure hunt. The rice had chick peas as well as the "pigeon peas," and I think some kind of bean, and I think more pork. I liked it. The really weird item was the third thing, the pastel I guess. It was sort of the Purerto Rican equivalent of a tamale, but made from a plantain instead of corn, and stuffed with meat and chick peas and I'm not sure what else.

If you'd like to do this week's Weekend Assignment, we'll be delighted to have you! Here are the guidelines:

1. Write your thoughts on the subject in you own blog, or in the comments to this entry. If you write a blog entry, please remember to come back here afterward and leave a link to your entry, so everyone can find it.

2. Your entry should include a link back here, so your readers know where they can go to play along themselves.

3. The deadline is Wednesday, April 7th at 6 PM PDT (9 PM Eastern). That night Carly and I will compile a list of participants so we can all read about the characters everyone wanted to meet.

Simple, huh? I realize this is going to be a very busy weekend for many people, what with Holy Week and Easter and Passover, but on the other hand you have almost a week to get around to your entry. I look forward to seeing what you come up with!

Hi, Karen! I've been so swamped I've barely had time for anything but work. I made time for this assignment, though!

Hi Karen,
Great assignment this weekend. Mine is posted at my place. I have never seen this show before. I'll have to check it out. Have a great day!

I asked a bunch of other people this question on Twitter, and included their answers as well as my own: