Yes, But Does It Help? 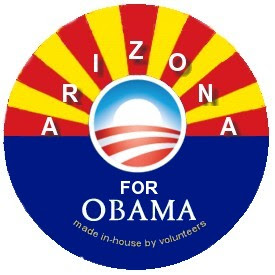 Yet another new button design.
So tonight, in my quest to do something Obama-related and record the experience for Huffington Post, I went to a free concert at Old Town Artisans in downtown Tucson. Three hours later, I left early, having spent $1 on a raffle ticket and another $9 on burritos and Diet Pepsi. I came away with an official union-made Obama-Biden button for John, two free DVDs about Obama from the Arizona Information Project, and a nagging doubt as to whether I've done anything this weekend that helps my chosen candidate even a tiny bit. 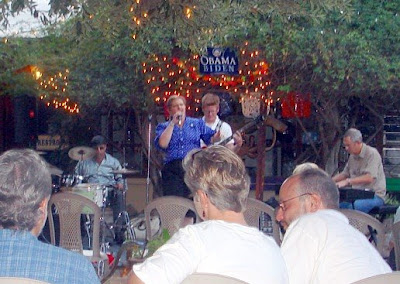 Amelia Dahl Quartet plays for Obama.
There were a total of seven musical acts in the five hour concert. When I arrived, Amelia Dahl was singing Fly Me to the Moon, backed by her light jazz quartet. Next up was the duo Sally and Pablo (Sally Withers and Pablo Peregrina). Pablo, who was the main musical guest at the art show on Saturday night, reprised several Obama-themed numbers, this time with Sally on lead vocal. You can see their rewrite of La Bamba, called La Obamba, on YouTube:

Hip Hop artist James Ciphurphace followed with two spoken word pieces, as his young son shyly shared the stage with him. Then came Cinder Bridge, a keyboard and drums duo that was probably my favorite act of the night. Jacob "Roll" Acosta (say it out loud) sang and played acoustic guitar. Ticket to Tokyo was a full-fledged, Petty-inspired rock band. I didn't hear American Android, another rock group, as I was long gone by then. I gather that most of these musicians have appeared at several concerts for Obama over the course of the summer and fall. Aside from the opening act, which played standards, nearly all the music was original. 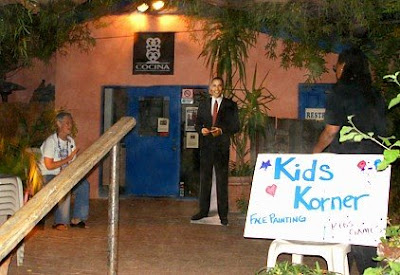 Why, it's Barack Obama! At the concert! Overdressed!
It was a beautiful night, with perfect weather, a pleasant setting and genial company. However, the event was sparsely attended, perhaps because this was Homecoming Weekend at the University of Arizona. I kind of doubt that much money was raised for the Obama campaign, but perhaps that wasn't the point. Many of the attendees have spent the past several months (or longer) making phone calls, canvassing neighborhoods, organizing events, printing information flyers, burning pro-Obama DVDs, etc. This concert seems to have been a chance for campaign volunteers to have a little fun, connect with each other, and get fired up for the final push. One of the event organizers spoke about how she had never been involved in a political campaign before, and of all the friends she'd made working to get Barack Obama elected. Other organizers and some of the musicians expressed similar sentiments. There were probably fewer than a hundred people in attendance all told, but they seemed to be enjoying the concert and each other, and the commitment to the cause was palpable. 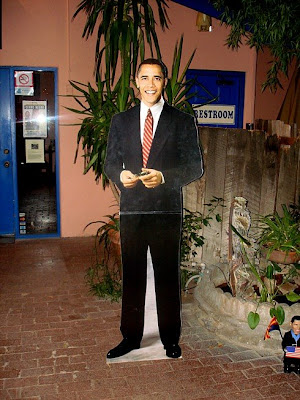 Okay, so he was only a stand-up.
Shortly before I left I spoke briefly with the woman who had brought the Barack Obama stand-up people had been posing with all evening. "I had fun setting it up in the passenger seat for the drive over," she said, "but only two people noticed." She had bought it in Flagstaff, of all places. Later she was in a shop in Sedona that carried life-sized stand-ups, including John Wayne. She asked if they carried an Obama one.

"What are you talking about?" the shopkeeper replied. "This is McCain country. His ranch is just up the road." 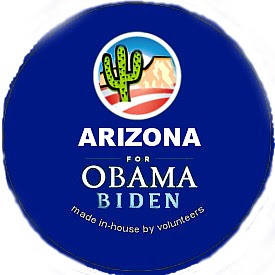 Okay, so Northern Arizona may have a mixed reaction to Barack Obama, even now. That's not surprising. The whole state is probably like that. The few polls that have been conducted here lately show the race getting close. Few people really think Obama can win Arizona, but down here people are starting to dream of the possibility that John McCain won't carry his own state. Even if that doesn't happen, Obama may well carry Pima County, and his coattails should help Democrats statewide.

Eight days to go! A volunteer called this afternoon and asked me to make phone calls this week. I didn't promise - the very idea of cold calling strangers fills me with dread - but I'm thinking about it.

First of all, thanks so much for the kind words about Cinder Bridge. That makes my day. What you gathered was correct: this was our third Obama gig, and we saw Ciphurphace and Sally and Pablo at the first.

Do these things do any good? Funnily enough, I posed a similar question last month. I think the answer is, it depends. The second event we played raised $2,600 -- that's gotta count for something. This event, though, with no cover charge, seemed more focused on getting people to vote and providing them with tools to argue with McCain supporters. Much harder to gauge effectiveness when those are the desired results.