Looking for Skeletons in the Candidates' Past

Tonight I'm just going to do a quick entry, I hope, because I want to visit everyone's blogs on this week's Round Robin Photo Challenge. I'm also weeks behind on making the rounds on the Ellipsis Monday Photo Shoot, but that will have to wait for tomorrow. I'm way behind on things today for two reasons:

1. John lured me to the tv twice today, with a classic Route 66 episode guest starring Martin Sheen and James Caan, and with new episodes of The Sarah Jane Adventures.

2. This Presidential Election cycle is turning me into a hardcore political junkie, probably for the first time in my life.

Late last night, say from 2 AM to 4 AM, I wrote an entry on my Obama blog called "They Also Serve Who Only Scan and Copy-Paste." Don't bother to look for it; it's not there, although I may reuse that title sometime soon. The article disappeared into the ether due to site maintenance, and my forgetting to copy the piece before attempting to post. It was about the fact that the Obama buttons I designed have been blowing out the door of the campaign office, especially the Barkers for Obama ones. They made nearly 1,000 buttons between Tuesday and Friday, and although not all of them were my designs they've probably sold hundreds of them. Last night, on request, I added to the range with these: 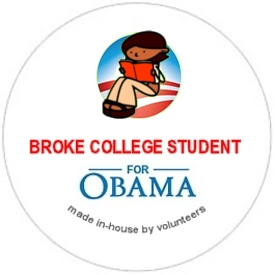 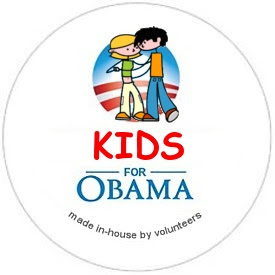 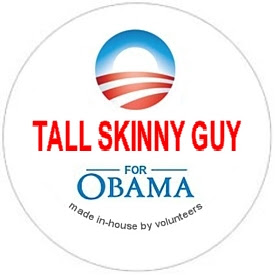 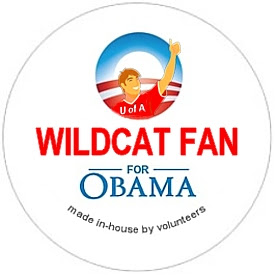 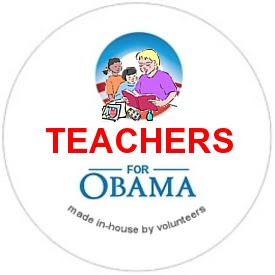 This afternoon, the guy in charge of the campaign office here asked me to make him a Barkers design with his dog pictured instead of one of mine. "Sure!" I said. And a family asked me to do a larger version of the Kids one so they can have a T-shirt made. 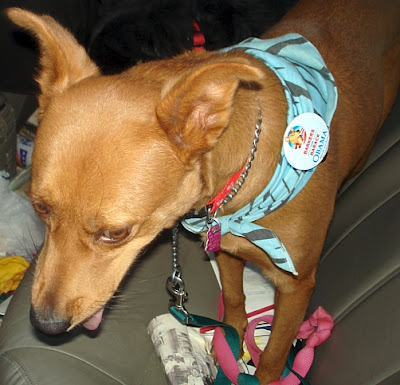 Cayenne wears a Barkers button with her own likeness.
Meanwhile, I myself still only have the defective buttons I made a few days ago, plus one Barkers and one Bloggers. I went down there today hoping to make more Barkers and Cool Cats and the Weekend Assignment designs, but there were still no Barkers on hand, the only Cool Cats were a few of the wrong cat, and I couldn;t work the circle cutter. I'm half convinced that the key to competent button making is to cut a goo circle on the crimble (printed design). There was no one down there today to help me with the mechanics of button making, so I have to put off my own button order until Monday.

The other political stuff of the day wasn't local. Over on the email account for mavarin@com, surrounded by nonsense characters, debt reduction come-ons and endless sex-oriented spam, I came across one with the subject line "7 Reasons Why Barack Obama is Not a Christian." The sender, a group called Christian Response, was offering to send out a DVD supposedly offering evidence for their spurious accusation. I didn't read the toxic email all the way through, but I did see that it ended with something like, "Who are you going to believe, Barack Obama or Jesus Christ?"

In accordance with my current policy on libelous spam, I emailed them back:

From: Karen @ thatword.com
To: Christian Response

article only to conclude that they are mere acquaintances. It is, Media Matters notes, "at least the 18th Times article this year mentioning that association." Media Matters goes on to say that the same person quoted about Ayers and Obama, Chicago Tribune columnist Steve Chapman, also called Watergate conspirator G.Gordon Liddy "McCain's "own Bill Ayers" - and yet the New York Times has never mentioned the latter connection. Amusingly, this is the same New York Times that the McCain campaign accused of being "in the tank" for Obama a week or so ago. (Update: McCain also has been friends with a 1960s anti-war radical, the late David Ifshin, who was making noise and shutting down campus at Syracuse University when I was a kid and my dad was a dean at S.U.. Ifshin didn't bomb anything, but he did broadcast anti-American war machine rhetoric on Hanoi radio.)

Meanwhile, there are reports every day about Troopergate and other scandals and abuses of power by Sarah Palin as Wasilla mayor and Alaska governor. There are legitimate concerns being raised about John McCain's health, about unreported "per diems" on Palin's taxes, and about unreported gambling income and losses on McCain's.

And there's this, which if it holds up factually and gains traction in the media, will probably serve as the final nail in McCain's political coffin: Rolling Stone is publishing a major, major article on John McCain in its October 16th issue. It's online now:
http://www.rollingstone.com/news/coverstory/make_believe_maverick_the_real_john_mccain

The article documents his unprincipled, hotheaded, self-serving behavior throughout his entire career, from his school days as the arrogant, hotheaded son and grandson of four star generals through his behavior this year. Using lots of interviews and quotes from McCain himself, it paits a very dark picture of the man, much more in line with what we've seen from him over the last several months that that of the principled moderate and proponent of "straight talk" that many believed him to be. That (along with the "Maverick" label) appears now to have been a calculated smokescreen, a way to rebrand himself after the Keating 5 scandal and attract favorable press attention as a route to power. (Update: Obama's campaign has now brought up the Keating 5 scandal in a major way, pointing out its relevance to the current economic crisis. McCain's people are now scrambling to counter this with feeble denials to well-documented fact.)

As I read the Rolling Stone piece and quite a few other articles about McCain and Palin, I am led to an inescapable conclusion. The difference between digging up skeletons in McCain's and Palin's pasts and doing the same to Obama - as the Republicans are trying desperately to do now - is that McCain's skeletons are real. Obama's are the product of racist, paranoid, opportunistic, xenophobic fantasy. No matter that he's a Christian - call him a Muslim anyway, and the rubes will believe it. Shake people up with talk of "socialism" when Obama calls for universal health insurance, and hope that nobody notices that Ronald Reagan said the same thing about Medicare in a scaremongering LP that Palin quoted from in Thursday's debate. Invent or play up spurious connections between Obama and terrorists and lobbyists, and hope nobody listens when the media point out McCain's many lobbyists on staff and Palin's former connection with an indicted Senator. Keep the narrative going on Fox News, National Review Online and in viral emails, and above all, train your supporters to assume that anything the rest of the media may say is a liberal elite media lie. 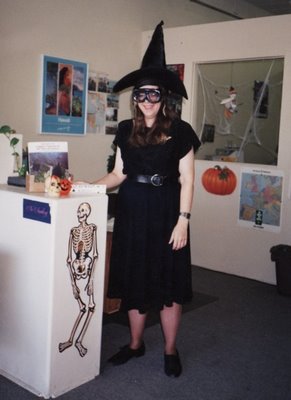 Only it's not going to work any more. A few people will always be fooled, but the rest of us can see which skeletons are real, and which are made of cardboard.
Karen

You and your "quick" entries! LOL!

I'm officially a Blogger now. Thanks for your kind words to us a few entries back :-)

I'm way behind on making the rounds on all the photo challenges, just finally started playing again and now with the whole AOL thing I've been going crazy trying to save everything I want from over there, just not enough time in the day.

Hopefully, once I'm caught up and comfortable at my new spot I'll be back to the challenges, commenting on a regular basis and might even join you on your assignments :-)

It's good to see and read that you have been getting your political on. Rant away! It's good to step out of your comfort zone and speak for yourself. I have enjoyed what you have written, and enjoyed even more how comfortable you were with it. Doesn't it feel good to set those feelings and words free? Write on.

For us Europeans American politics are hard to understand. Nobody here cares about the religion of a candidate because that has nothing to do with politics. After all we are free to believe what we want. And then this dirt washing that's disgusting these republicans mustn't have a very high IQ ! They behave like old washerwomen ! McCain is far too old for that job and should enjoy his retirement ! and that woman ! no comments !

Karen, I'm sure you know I am for Obama if you've visited my blog (which you have) I can't stand all the crap circulating about Obama that people keep bringing up again and again. And I can't even bear to talk about Sarah Palin who speaks gobbledegook making no sense at all most of the time. Perkiness and folksiness can get you just so far...
Can I borrow the button: Teachers for Obama for my sidebar? I'll assume it's okay unless you tell me it's not. thank you so much! :)

OMG - I simply LOVED your comment you made to 7 Reasons Why Barak is not a christian!!!! You rock lady!

PS - the link on our sidebar of Robins has my old address still...