For last week's Weekend Assignment #235: Button Up!, I asked you to design a button, or at least tell us what it would say. Here are the results of your creativity. All designs shown below are copyright the original bloggers unless otherwise stated. Follow the links to the actual blogs to see the full-size versions and many more designs, or to read about other button ideas that didn't make the cut:

I don't think I'm going to be doing this assignment, but I do have a little award for you at my blog today!

I did this a while back: Obama buttons for my avatars. 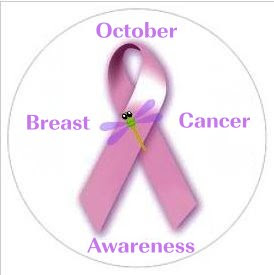 Two things that mean a lot to me are coming up very soon, so I kinda got excited about this Weekend Assignment. October is Breast Cancer Awareness month, and of course with the election in November, it's a good time to remind folks to get out and vote on election day. Although, given the recent events with the on again, off again, she says bailout, he says relief package machinations, I think folks will be going to the polls in great numbers this election to make their feelings known. Oh well, I made the effort anyway. I never really know if my little voice is heard, but at least I know I put it out there, so I can feel good about that.

I read Karen's post on Friday and then listened to the presidential debate that evening. My first idea for a button was just a red circle with TALK in the middle and then a diagonal red line down the center. I am soooo tired of all this jabbering and both candidates saying nothing substantive. I've always maintained that actions speak louder than words. 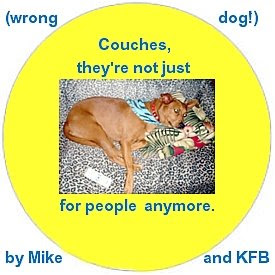 The last one has nothing to do with politics. (You're welcome!) We have this picture in our kitchen of our first dog, Cosmo. He is sitting on the couch, like he often did, but he is sitting on his butt with his hind legs in front of him and one front leg on the armrest. He looks like he is trying to imitate the way a person sits on the couch. It cracks me up everytime I see it. I'd put it here, but it is from an old, non-digital camera and we don't have a scanner. Anyway, I was thinking of that and something along the lines of, "Couches, they're not just for people anymore."

The new Weekend Assignment will be posted shortly. Maybe.

P.S. If you did this assignment and want your button, please email me your snail mail address. Thanks!