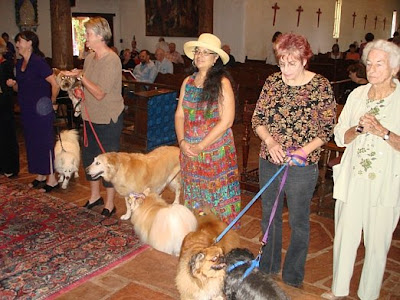 Canine bystanders during Holy Communion
Okay, so it's not really called "Take Your Dog To Church Day," except at Casa Blocher. It's actually the Feast of St. Francis of Assisi, and technically it's celebrated on October 4th. But my parish, The Episcopal Church of St. Michael and All Angels, pretty much always transfers the observance to the nearest Sunday, including the annual Blessing of the Animals. For most people in the parish, "animals" roughly translates to "dogs" - which is fine by me! 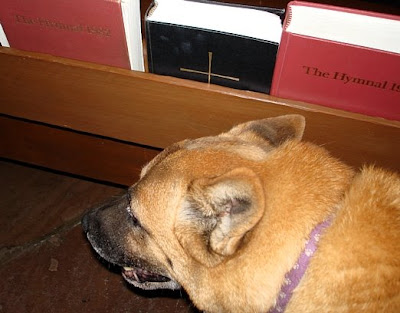 Tuffy at church in 2007. Note the shaved patch on her head.
Last year's observance was bittersweet for me. Tuffy had recently been diagnosed with cancer, and I knew there was a good chance it was her last trip to church.. I may have taken Tuffy with me on a brief weekday visit to the church's business office, but it was definitely her last blessing. 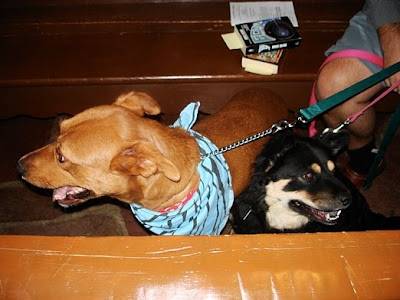 Cayenne and Pepper look around before Mass.
This year it was the new crew, Cayenne and Pepper. Overall they behaved pretty well, not up to Tuffy's standard, but better than just acceptably. They did a bit of whining, and visited the people in the next pew back, but I don't think they barked, and they didn't break away and wander off. Well, maybe once, for all of five feet. 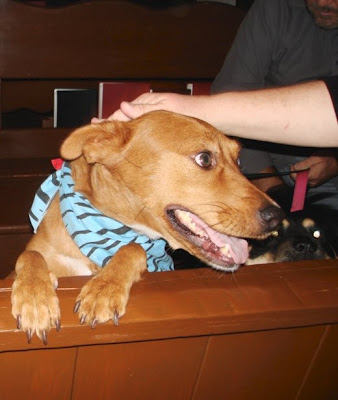 My friend Mary pets her new friend Cayenne.
Unfortunately, Take Your Dog to Church Day has become complicated for me since I became an acolyte, and started carrying candles and crosses and such into the sanctuary. My friend Kevin had to look after Tuffy in the pews a couple of times in past years, because it wasn't practical to have her sit near the altar with me. This year there were two dogs to supervise, and Kevin had only met them once before for about thirty seconds. But he graciously looked after them for most of the Mass. 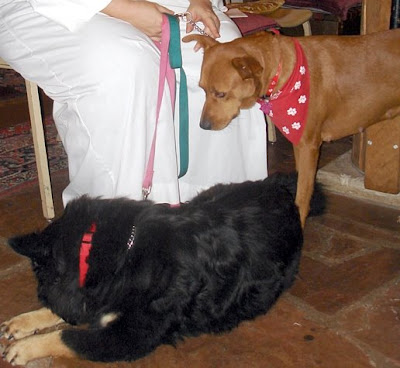 Dogs in the sanctuary!
Father Smith had streamlined the Mass to accommodate canine attention spans, but by the time he was giving his sermon there were audible signs of doggie restlessness. I was pretty sure that most of the whining was coming from Cayenne and Pepper, and told Proscovia so. "Go get them," she said. So as Father Smith talked, I went into the pews and collected them from Kevin. Once they were with me they sort of settled down - and I still heard whining from the pews. 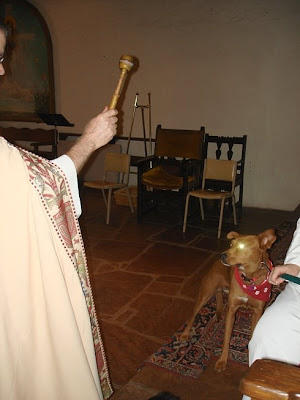 The blessing - or was it an exorcism?

After his sermon about St. Paul, St. Francis and negotiations with a medieval wolf, Father Smith and Proscovia went around blessing the pets individually. It sounded as it they were almost all dogs, but there was a pair of turtles. Eventually they got around to the Blocher dogs, who were a little dubious about the procedure. 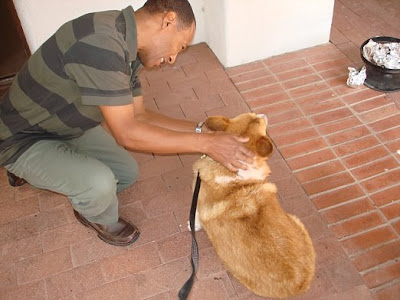 Alex the crucifer (cross bearer) and his new friend Pancake.
After Mass I briefly looked after Erin's sister's Corgi, Pancake, and then quickly got my alb off so I could photograph Pancake for Erin and then retrieve Cayenne and Pepper, who by then were back in the pew with Kevin. 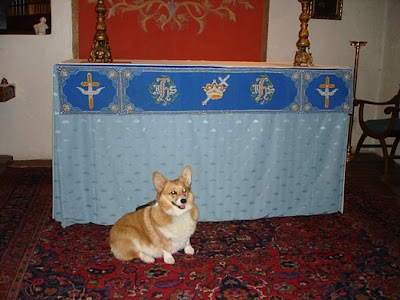 Pancake poses for the people.
Pancake was probably the best behaved dog in the whole church. Erin was thurifer, which means that she had numerous duties during the Mass involving incense. Pancake stay and stayed put through all of it. 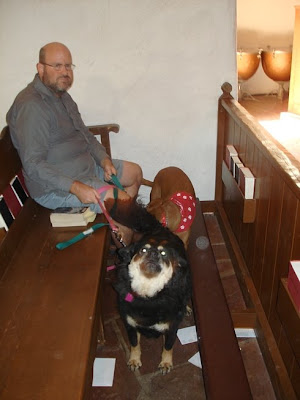 Pepper's turn to look alien. Or possessed. Or robotic.
Cayenne and Pepper weren't remotely as well behaved as Pancake. Still, they did all right, and everybody loved them.

There is more to the legacy of St. Francis of Assisi than sprinkling holy water on dogs. Another part of it is a prayer that's attributed to him, although it's considerably more recent:

This autumn, as Republicans and Democrats battle for votes on behalf of their preferred candidates, I hope some of us will try to live up to those ideals.

Karen, I love this post on St. Francis and Blessing the Animals at your church. St. Francis and his Peace prayer are favorites of mine. Great pictures! I felt I was part of the ceremony! I loved participating in Round Robin Photo Challenge. :)

I wish my grandchildren behaved as well as your dogs in church!

Ok, now I've seen it all!! I've said many times that you find very different things to show or write about, but this takes the cake!!