A Blue-Green Oasis in McCain's Own Red State

This is essentially the rough draft of an entry I'll be submitting to The Huffington Post. That version, if it happens, will probably be shorter, and with only one photo. Okay, let's give this a shot! 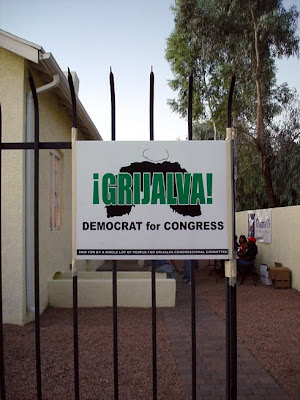 Both of Tucson's Congress members are Democrats.
When John and I came to Arizona in 1986, it didn't take us long to get the lay of the land, geographically and culturally. Phoenix, where John's sister lived, was a huge megalopolis, its desert mostly obliterated in favor of car dealerships, shopping malls, golf courses and swimming pools. Tucson, although growing, was a much more manageable size, and you could see desert plants such as saguaros and prickly pears even in the heart of the city. (I'm sorry to say this is less true now, 22 years later.) Phoenix gave off a vibe of being formal and well-to-do. Tucson was informal and scrappy. Phoenix was full of Republicans (Barry Goldwater, Evan Mecham, John McCain), and Tucson full of Democrats (Mo Udall, Dennis DeConcini, Tom Volgy). So naturally, we moved to Tucson. 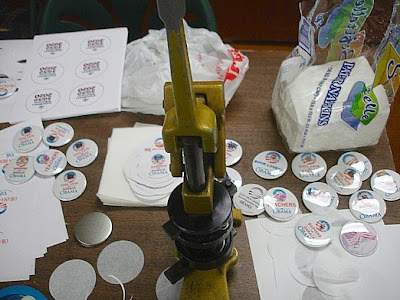 Making Obama buttons I designed for the local campaign office.
But aside from voting, the occasional blog entry and the odd contribution, I didn't really get involved in politics until this year, somewhere around the time of the two conventions. A volunteer called and asked me to help with canvassing and phone banking, but I refused on the grounds of severe discomfort due to shyness. The volunteer then suggested that I might do office work for the local Obama campaign, primarily data entry. Was I familiar with Excel spreadsheets? Heck yeah! I was, after all, a recently-unemployed staff accountant.

So I came in the next day and the next, recording the results of phone calls to Democrats in Arizona and New Mexico. There was no Obama campaign office per se, but much of the activity at the Pima County Democratic Headquarters was centered on the presidential race. One day I sat with several older women, one of whom joked we were "old white women for Obama." The next day the office had a hot-selling button with that very slogan. That's when I offered to take my laptop home and start designing Obama buttons. "Middle Class for Obama," "Book Lovers for Obama" and (my favorite) "Barkers for Barack Obama," featuring my dogs' pictures, were among the initial designs. The line has expanded considerably since then in response to people's requests. Another volunteer named Barb is in charge of the button production. Each of us loaned a buttonmaker to the campaign, but she orders the parts, creates some of the designs and keeps an eye on what sells. 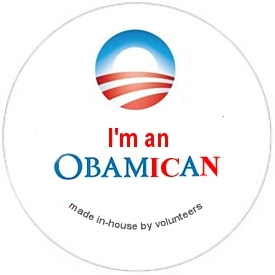 As I've worked on buttons or data entry, I've heard the volunteers' end of lots of phone conversations, and the occasional discussion in between calls. Much of the effort has been directed toward getting out the vote in New Mexico, considered much more of a swing state than Arizona. Arizona, after all, is John McCain's constituency as senator. Heck, I've voted for him myself a few times. (Never again!) One day, someone expressed her annoyance about the emphasis on our neighboring state. "New Mexico only has three electoral votes," she said.

"How many does Arizona have?" I asked.

At one point I was told that Arizona itself had become a swing state, but I've seen little evidence of this. Even here in Tucson, pressures are brought to bear on behalf of the Republican ticket. One day I heard a rumor that a local Catholic church allowed an independent group to add a flier to its Sunday bulletin, promising damnation for anyone who votes for Barack Obama or Congresswoman Gabrielle Giffords. I've found no evidence online that this actually happened, but I would not be surprised if it did. Similar problems cropped up here in 2006.

As we get down to the end of the campaign, though, and more and more states come into play for the Democrats, things seem to be picking up here. Governor Janet Napolitano was in Tucson on Saturday, hosting a breakfast event for Obama. Next weekend, Robert Reich and Gabrielle Giffords will be hosting another event. Tucson's other member of the House of Representatives, Congressman Raúl M. Grijalva, has been campaigning for Obama since the end of January, and loaning out his own campaign headquarters for debate parties and other Obama volunteering and events. 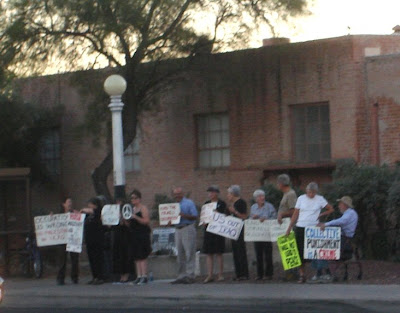 A local church hosts an anti-war rally.
On Friday night, October 17th, Grijalva hosted an event involving the "Obama tour bus." I decided to take some of my buttons, drive down there and check it out. Somehow I expected a traditional rally, with people standing outside carrying signs. But it wasn't like that at all. I did, however, see something like that on the way over. Outside one of the more socially active churches in town, about a dozen people were holding up anti-war signs at a major intersection along Speedway Boulevard. (Sorry the photo isn't better; it was around sunset and at a distance.) 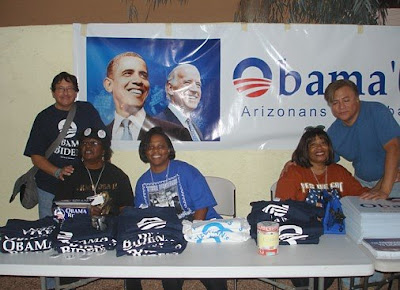 Friendly volunteers from the Obama tour bus
The Obama-Grijalva event was a more sedate affair. Outside a converted house off Fourth Avenue, there was a white bus bearing Obama logos and such. Tables were set up in the yard, and volunteers sold T-shirts and signs and buttons and stickers. I left to find an ATM, and came back with cash for a T-shirt. 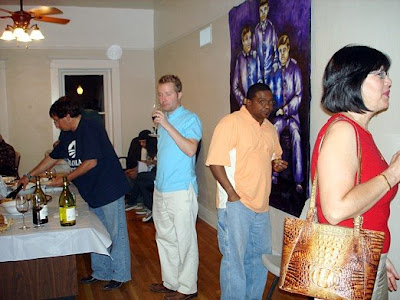 Wine and mini-chimis for the Grijalva campaign.
Inside the building, people were milling around, drinking white wine and chatting, and eventually eating a spread of Mexican finger foods. Mr. Grijalva himself said hello to me and I responded, but by the time I worked up the nerve to say anything more he was off talking to his campaign manager (or someone). 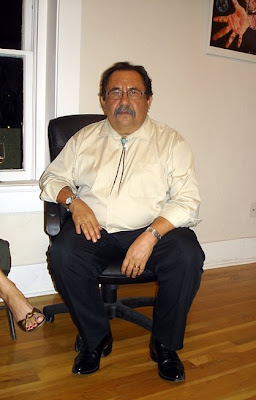 Congressman Raul Grijalva
Eventually I approached the Congressman properly, explaining that although I'm not in his district I've been hearing good things about him for years. He seemed genuinely pleased. I then asked to take a photo, explaining it was for my blog. At first he asked what a blog was, but it turned out he was putting me on. He asked whether my blog was "left wing," and I said I wrote about a lot of things, not just politics.

"But politically, is it left wing?"

Slightly nonplussed by the terminology, I said that I had pro-Obama and Giffords stuff on my sidebar, and offered to add him to it. (I prefer to think of myself as "Democrat" or "moderately liberal.") I went on to say that I was hoping to submit my first article to Huffington Post soon. He approved. 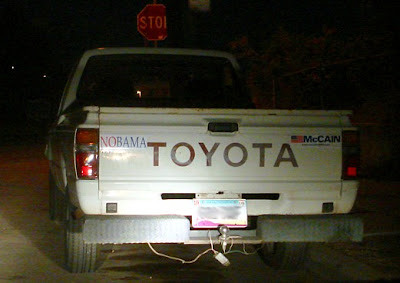 P.S. Another HuffPoster reported on the Napolitano appearance. Her entry is here.

Did you see the photo in my blog last night? McCain was in my house!! WTH?!