For the Round Robin Challenge: Handy I did hope to get someone else's hands to photograph, but ultimately I went with my own, mostly. But those photos don't have to be boring! Hands are a good subject for fiddling with PhotoStudio's various filters and effects: 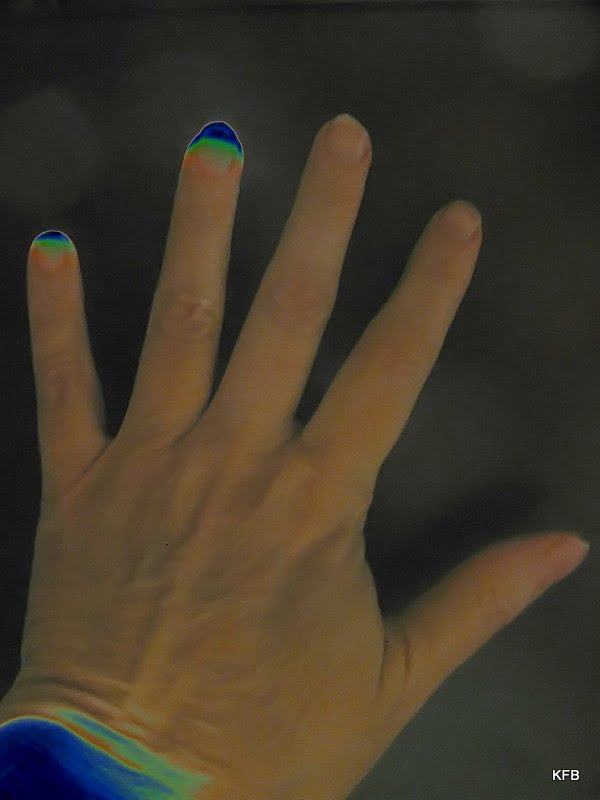 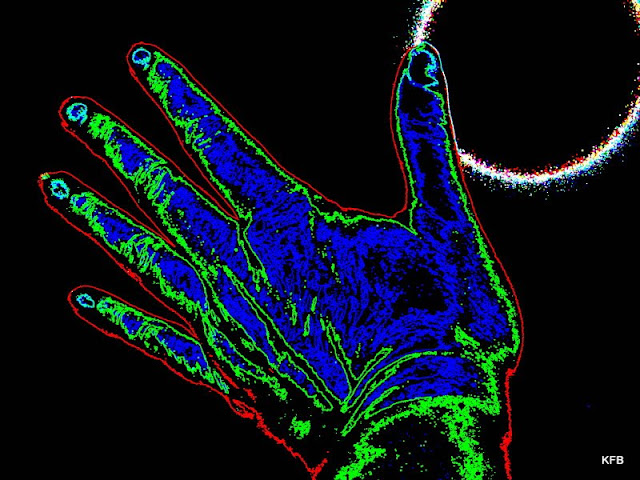 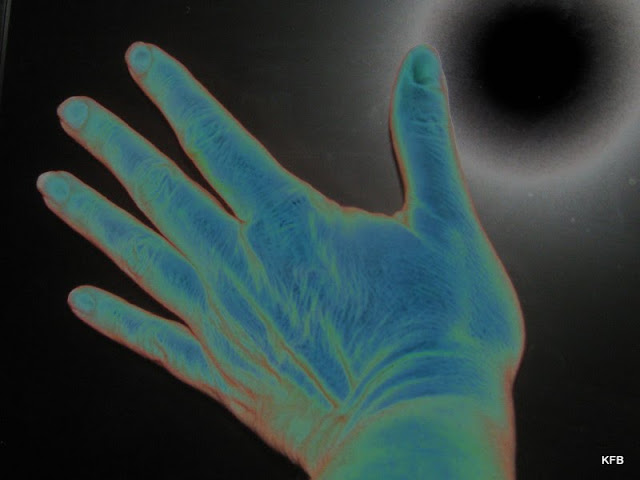 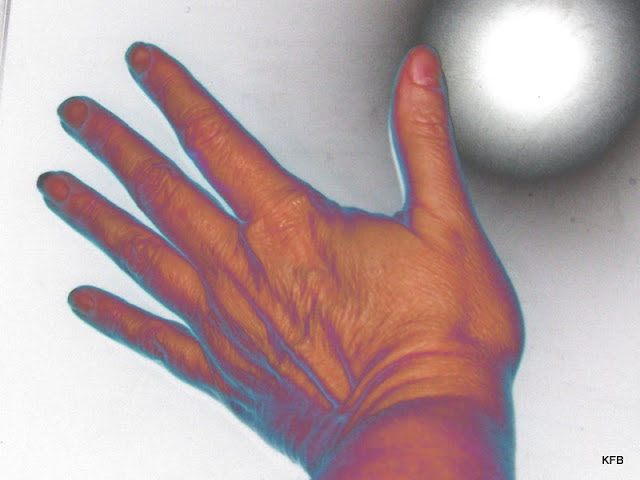 The negative version of the previous edit. 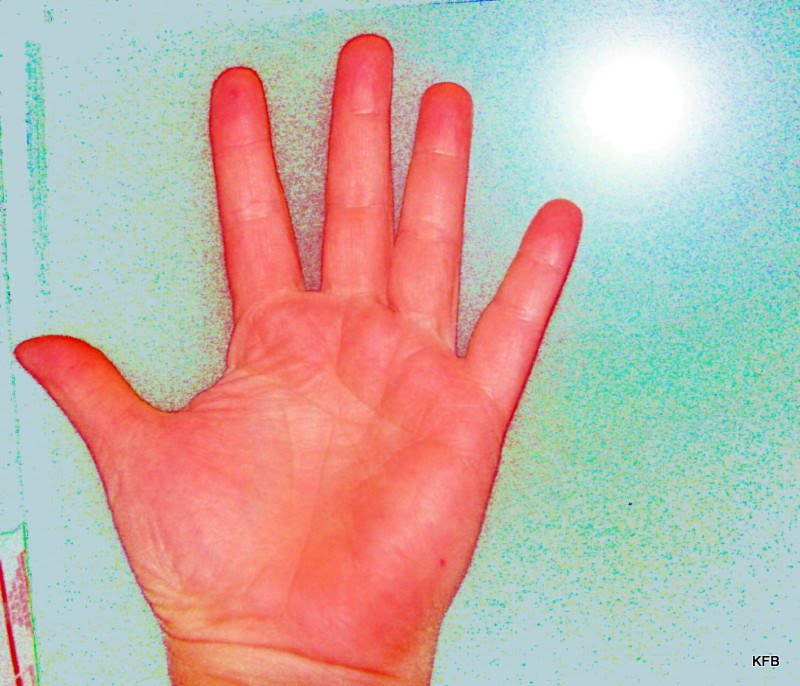 When I asked John if I could photograph just his hands (for privacy's sake, he doesn't allow me to post pictures of him) he pointed out that I did something like that a while back. I used one of them at the time, but here is the other: 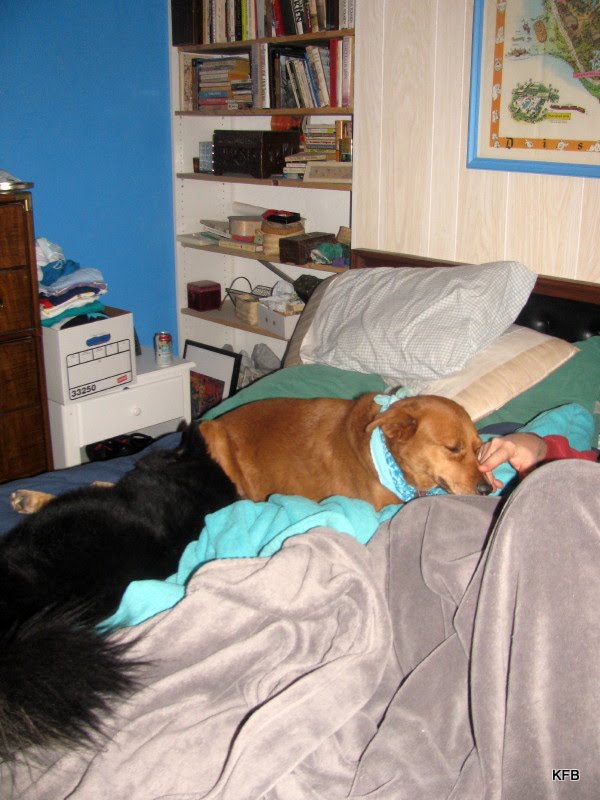 Please check out all of this week's Round Robin entries:

Links to this post
Email ThisBlogThis!Share to TwitterShare to FacebookShare to Pinterest
Labels: Hands, Round Robin Photo

Who Can It Be Now?

This is me as of today: 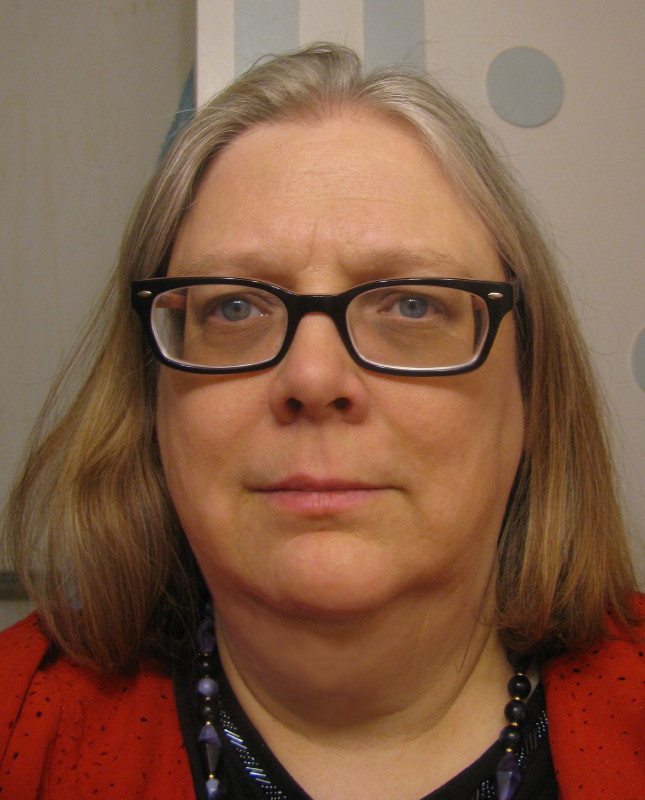 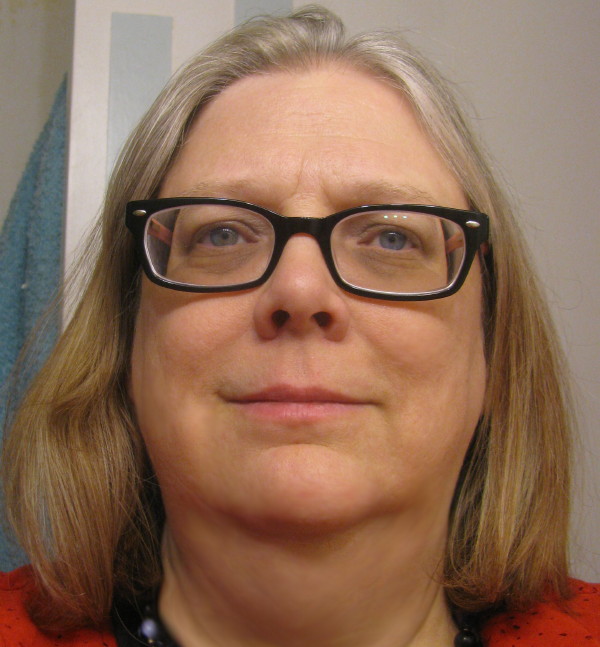 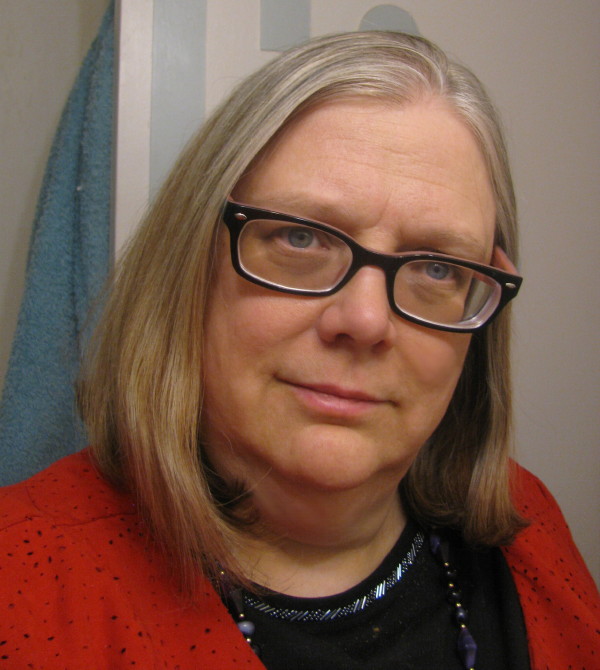 Maybe to you folks online this doesn't look like a big change, but I've been getting "Wow" and "OMG" reactions from pretty much everyone I see in person since I left a salon called Polished yesterday afternoon. Even the least observant casual acquaintances do a double-take. Father Smith took one look at me and said, jokingly, "If you see Karen, tell her I was looking for her."

I'm going to be 55 years old in less than a month, and my hair, unsurprisingly, has been getting grayer. The last time I used hair color (auburn mixed with light reddish brown) was perhaps six months ago, so the top six inches of my hair had grown out as gray mixed with my original ash brown. I never liked my mousy brown hair, but the gray actually improved it. Cool!

Unfortunately I still had lots of the red hair below those first six inches, which made for a jarring contrast with the new hair up above. I needed a haircut anyway, and the place I used to go was out of business, so I sought out a salon that does hair color. (If I did it myself, I'd almost certainly screw it up!) I told Gaby at Polished that I wanted my hair cut to my shoulders, and the whole thing to look enough like my natural gray-plus-ash brown not to look funny as it grew out. Gaby went to work, with a preliminary haircut, highlighting, a wash, more hair color, a second haircut and styling. The whole process took about an hour and a half.

My vision is so bad that it can't be completely corrected even with strong glasses, so you can imagine how blind I am without them, and how frustrating it was not to be able to see what was happening to me as Gaby worked. My experience with hairdressers is marked with several memorable disasters, from the Shirley Temple Incident to the Lopsided Watermelon Debacle. Even the most successful of the radical changes have always freaked me out at first. In the words of the Great and Powerful Oz, I was petrified. Finally Gaby finished and I was allowed to put my glasses on. In the somewhat dim light of the salon, I could have sworn my hair was now white, at least on top. OMG! (The lighting on the shots above makes the hair on top look a little lighter than it is.)

"Do you love it?" Gaby asked. She was justifiably proud of her handiwork.

Gaby was very nice about my ambivalent reaction, and I knew better than to complain, whatever doubts I had. I paid and left. Sitting in the car, I flipped down a vanity mirror. No, it wasn't white! It was actually rather nice - grayish blond more than grayish brown, but really rather nice. And everyone who has seen it since has liked it, from the teacher at St. Michael's who doesn't even know me by name to the supervisor at Safeway. Everyone at the church office loves it, and even John likes it - and he's always my harshest critic on this sort of thing. He even compared my hair, in a complimentary way, to that of Florence Henderson! Really? Um, okay!

Late this afternoon I went back to Polished and left a message for Gaby that everyone loves it, and so do I. She deserves that. I also explained about my not being able to see it properly at first.

You know me; I hardly ever go on about physical appearance, particularly my own. But this is such a big change, in addition to the 55+ pounds I've lost since last summer, that I felt the need to write about it. And now I'm done. Happy Day After Your 100th Birthday, State of Arizona!


I did take a few new pics today of clouds and snow on the mountains, but accidentally deleted them. Drat!

Round Robin Challenge: No End to Her Yarns 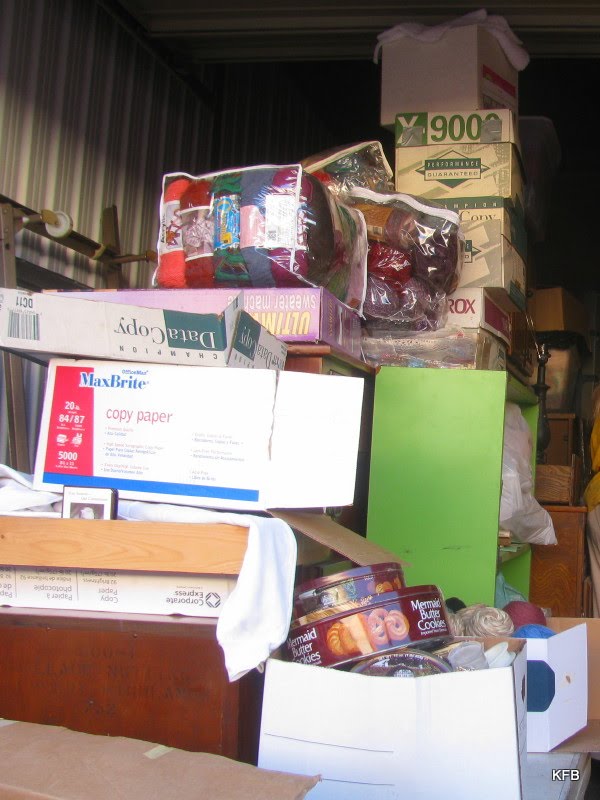 Okay, yes. I had ulterior motives for assigning this week's Round Robin Photo Challenge: Crafty. For the past month I've been absolutely overwhelmed with yarn, beads, needlework, costuming, embroidery, crochet, tatting, jewelry-making supplies and who-knows-what-else, all from the estate of my friend Jan Lockett, who died January 21st. In early January we packed up the contents of her shed and bedroom and moved it all into a 10 ft. x 20 ft. storage space, completely filling it. By the time she died I'd been given the task of disposing of it all. Other than furniture, I swear the majority of what was in there was yarn or thread, along with many cookie cans full of beads, and bags full of half-finished projects. 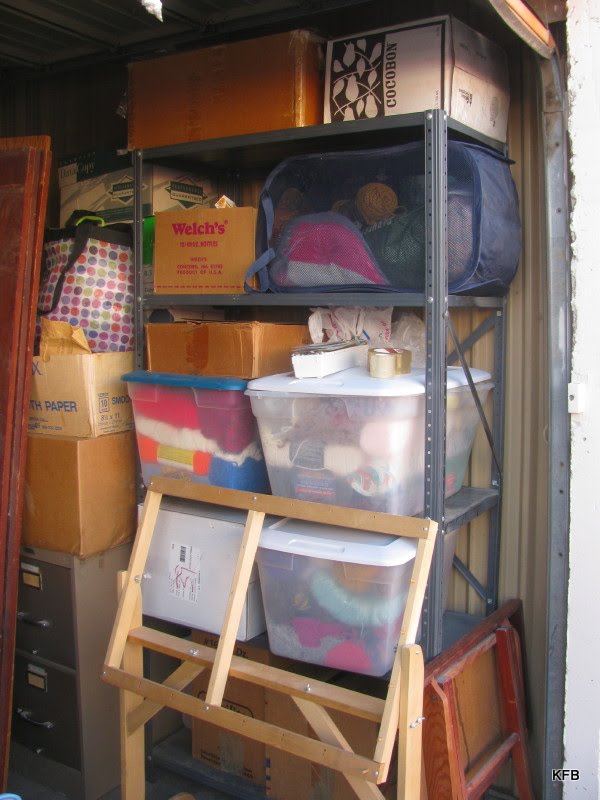 There must have been over twenty bins, bags and boxes of yarn, knitting needles and crochet hooks. A member of the church's Knitters and Quilters group took home five bins to hand out at future meetings, and I carried another eight bins or boxes and three bags of the stuff across a crowded parking lot into the church's Bride's Room one Sunday afternoon. The photo above was taken in the storage space after all that. Everything you see on or next to those shelves is yarn and related supplies, except for a roll of tape and a pair of scissors. Oh, and the filing cabinet, but she also had lots of knitting, crochet and needlework patterns on file, along with books and magazines on the subject. 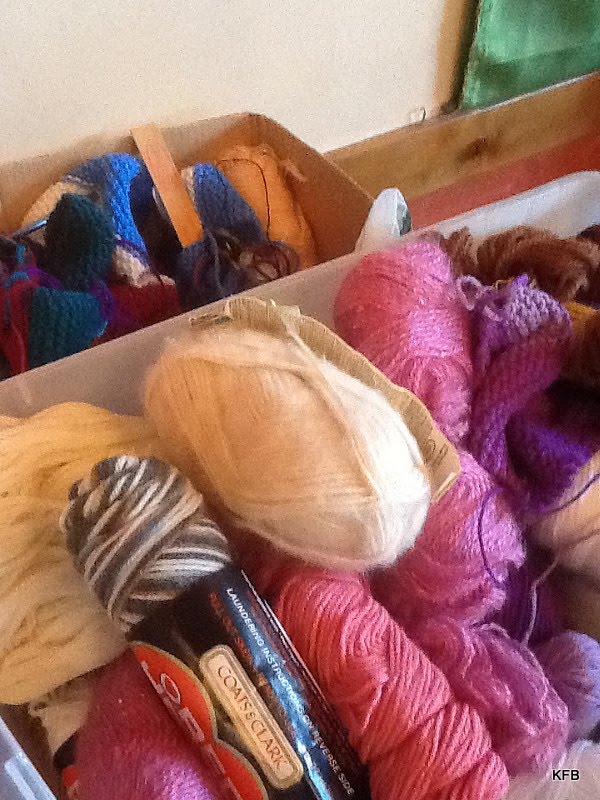 We had a mini-estate sale after Jan's memorial service a week ago, which we carried over to after church the next day. People from several different knitting groups carried off yarn and partially completed scarves, blanket panels and so on. One person needed specifically pink and blue, non-wool yarn for charity baby blankets. Another group makes comfort shawls or blankets (I forget which) for injured soldiers. 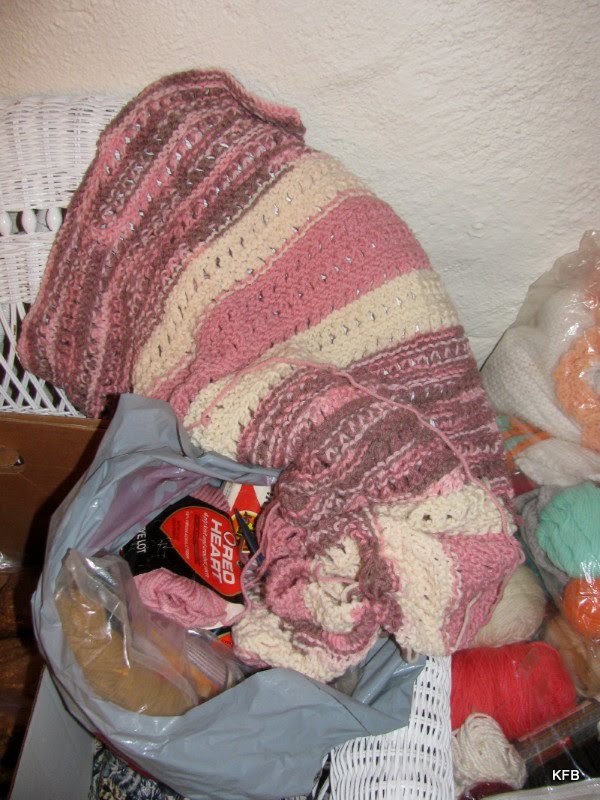 Even after all that, there was plenty of yarn left in the Bride's Room, along with crafts made (or partially made) from yarn... 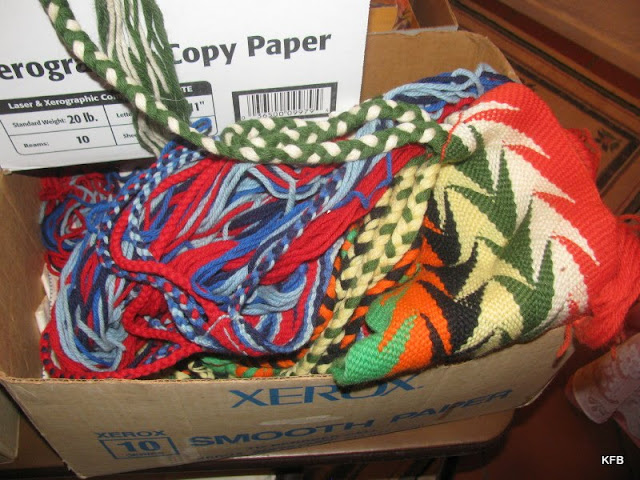 ...much of which is colorful and attractive, but hard to identify!

Now let's see what crafts other Robins have come up with:

And as always, you're welcome to join in too!