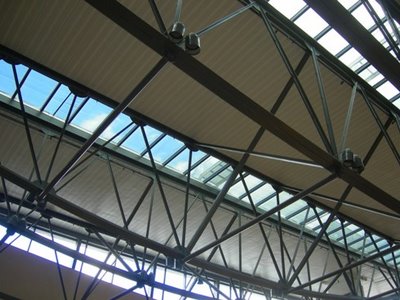 This was my first photo of the day. Where was I? Can you tell? I darkened the highlights a little of this one, but still didn't manage to get the same color of sky that I saw with my eyes. 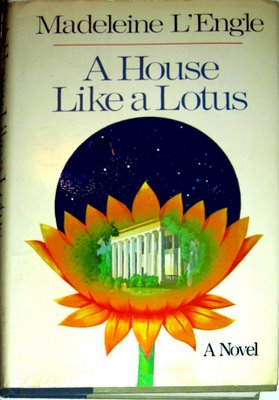 Sometime during the day, someone on Wikipedia (a teenager, I'm guessing) wrote a two sentence stub article for A House Like a Lotus, the same L'Engle novel I've been rereading for the last couple of weeks, and then left a note on my Talk page asking me to expand it from there. Since I was planning to write about the book in a few days anyway, it was not big deal, but I was a little annoyed that someone else started the article and then left me to do the work. Also, her note to me was a mess, full of bad formatting in Wikicode and HTML. When I went to her Talk page to reply, I was redirected to a page with a silly picture of Bill Gates and a little note that said, more or less, "Ha-ha! Fooled you! There is no such page!"

This strikes me as a bit juvenile, and John suggested to me that this may be her way of enticing me to write something she can use in a school assignment. After all, in the nine years or so since I started my online bibliography of L'Engle, I've had lots of requests for answers to what were very obviously study questions. In case this kid is trying to read a Wikipedia article instead of the book, I'm going to hold off writing the synopsis for a week. That'll show her. I also made only oblique reference to the fact that two of the characters are lesbians, not because I'm squeamish on the subject (I'm not), but because that plot detail belongs under a spoiler alert - in the synopsis I'm not writing yet. 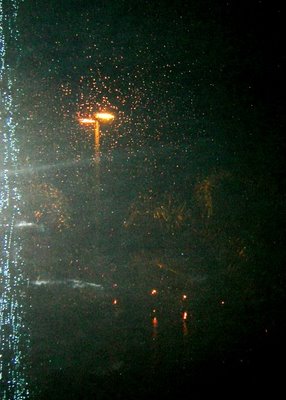 When I emerged from the accounting department at work tonight, it was nearly 7 PM. I reached the big windows near the stairwell, glanced out, and thought, "Oh! It's raining." Rain in October isn't exactly unheard of in Tucson, but it's not common, either. 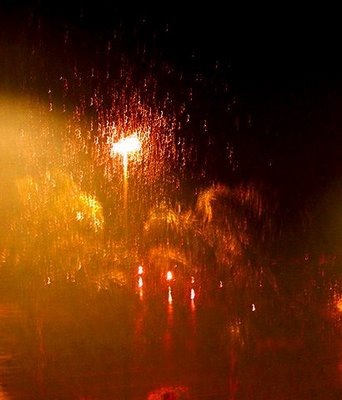 Neither of these two shots is quite what I saw. There was a lot of glare and reflection from the overhead lights in the hallway, but I've darkened these and boosted the contrast (and messed with the saturation on the second one) so we can see the rain and the outside lights better. I like the way the second one turns the rain into something like pointillist fireworks.

I wasn't looking forward to crossing the parking lot in the rain, although doing that is a lot easier and safer and drier than traversing the Crosswalk of Death in the same conditions. I'm quickly becoming accustomed to parking in the main lot, one of the perks of having been with the company almost a year and a half. It's very full, though, and since I come to work later than most people I'm often stuck parking way in the back, beyond a berm, and sometimes technically in front of the building next door. 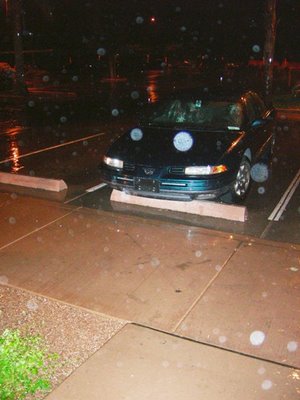 But then I remembered what happened when I returned from lunch this afternoon. I had almost despaired of finding anything inside the berm when I suddenly noticed that the second closest space to the employee entrance was empty! Woo-hoo! So before I walked the ten steps (yes, I counted) from the door to the car, I took a few pictures as evidence. Here's the car, as seen from just outside the door. 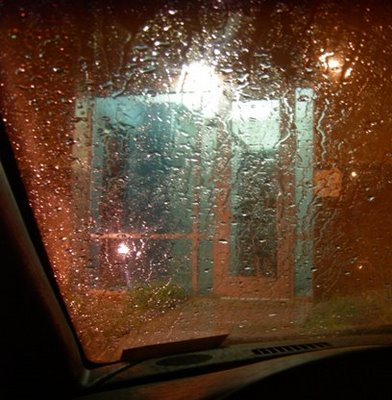 And here's the door, seen from just inside the car. By the way, the only thing I did to this picture was crop it. 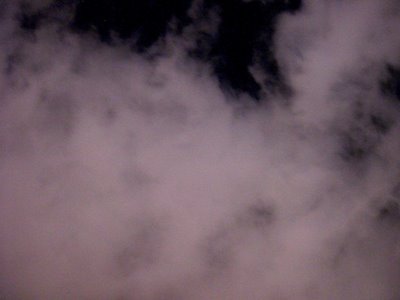 This cloud picture is nothing much, but it represents an experiment. It's a night shot of a sky that was spotty with clouds. I took it by laying the camera on its back on the roof of my car (this was after the rain stopped), pressing the button and letting go. That leaves the camera entirely stationary as it does its two second exposure. Unfortunately, the clouds directly above the camera at that moment weren't very interesting.

Good news and bad news: I got to the gym again tonight, managed to extend my time on the treadmill to 25 minutes, and even discovered that I've lost a few pounds. My high level of edema right now says that the loss probably isn't just water. On the other hand, my pulse spiked up to 174 in the last couple of minutes on the machine. Also, unrelated to the gym but definitely annoying, my mouse has stopped working entirely. So if there are typos in this entry - and there always are - I'm sure you'll forgive me if I wait until I get to the office tomorrow to fix them. It's late anyway. Good night! (Update: Yes, there were lots of typos.)