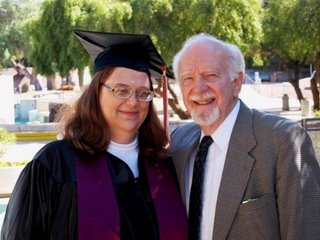 I've spent much of the evening catching up my email and educating myself about Wikipedia policies. Consequently I'm getting a late start on this entry. That's okay. I haven't much to say anyway. I've already written a couple of tributes to my dad:

Tonight's entry probably won't add much to what I say in those.

The truth is that I'm very different from my dad in terms of personality traits. He's organized and disciplined. I'm so very not. He's fairly private in his personal life. I'm highly confessional, almost compusively so. He looks forward, hardly ever back. I look around a lot. He's achieved a lot in his life, and just keeps going, even now that he's well into his eighties. I'm--

When I was a kid and then a teenager, I used to think about my parents, with their multiple activities and respected positions in the community. I'd think, "They're overachievers. I could never be like that. I wouldn't want to be." My dad was an assistant dean by 1965, and became the dean of University College about four years later, if memory serves. Also in 1965, My mom was holding down a job plus private practice, serving on five boards of directors, and writing a musical revue. They were both Ph.D.s, of course. I, on the other hand, didn't do any extracurricular activities at school, except for appearing in a brief sketch one year in high school. I also didn't get the straight As they wanted -- only five of them per report card, usually. More tellingly, I didn't manage to finish my B.A. at Syracuse University in 1979, let alone continue on to grad school.

But look at me now. I did finally graduate from college, with a more useful degree than the one I started out to get 31 years ago. I've got one novel completed and I'm editing the second. I blog every single night, even though John sometimes wishes I wouldn't. I help Carly with the Round Robin Photo Challenges. I write and edit for Wikipedia. I have so many irons in the fire that I continually burn myself.

Did I get all that from Dad, this continual whirl of activity? Probably. It's true that he's never managed to do much sitting around as a retiree. He's heavily involved with his church and the local railroad museum where he lives, among other activities. He's better at it than I am, though. I need to find a way to work little things like cleaning and working out into my schedule. That's where Dad's discipline and organization come in, I suppose.

I probably get my intelligence from both parents, and my sense of humor, and my ethics. But in terms of actual personality traits, the inability to just hang out and relax is probably more from my Dad than from my Mom. Yeah. Definitely. 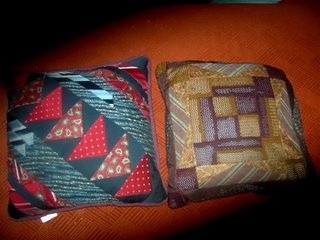 Extra credit: Did you ever get dad a tie for Father's Day?

Well, of course! I think he liked them, too. I especially remember the "wide tie" era.

I've shown you at least one of these couch pillows before, but it's worth mentioning them again. John and I got these two cushions for Christmas, 2004 from my stepmother, Ruth, an experienced quilter. She made them out of some of Dad's old ties! As far as I'm concerned, this is the coolest use of old ties, ever. (Yes, I did choose to use a photo with my persistent lens cap problem. I like the way it framed the picture!)

Not so far off from Dad after all, eh? LOL! I am just like my dad...if we lived in the Bizzaro universe. ;-)

how cool are those tie pillows?!! LOL.. I'd do that with some around this house, just one thing... i can't sew to save my life! LOL.. but that's ok neither David nor my brother know how to even turn on a computer! So we're even! lol (then again.. my brother could make the pillows if it weren't for his stroke since he was a designer)