Better Than Nothing. Maybe.

Hi. This is going to be one of those entries that my beloved husband would say shouldn't be done at all. "You should go for quality, not quantity," he insisted earnestly when we were out for pizza earlier tonight. The time I spend writing a less-than-amazing blog entry could be better spent sleeping, or working out. Or cleaning.

Show of hands: how many people think I'm likely to take this advice?

It is true, though, Some of these blog entries are better than others. Also, I foolishly just spent about two hours reading part of a series of blog entries about "comics urban legends," via Making Light. If I hadn't done this, I might have gone to bed at a semi-reasonable hour tonight, as I insisted I would probably do. 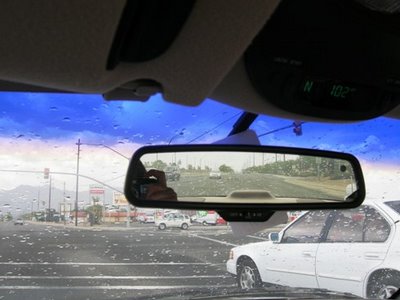 I wanted to do an entry tonight called "Here Comes the Rain," partly because it's a Beatles reference, and partly because well, here it is. The humidity was suddenly way up today, and we had a brief shower in the afternoon. It will take a lot more than that to get the monsoon going, though. Notice that the temperature in my car, even with the rain, was 102. I saw 110 on that thermometer yesterday, but it was down to 108 by the time I got the camera out of my purse. I didn't bother to take the shot. 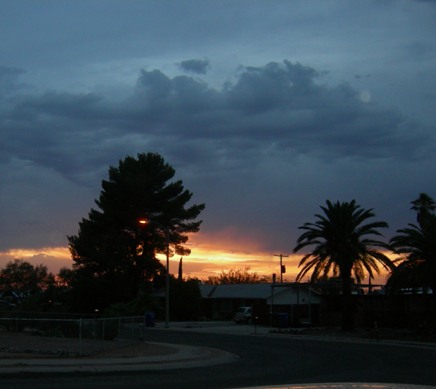 Clouds help make sunsets more interesting, but I never really got a good angle on tonight's edition. There was a nice leading edge of sunset-y almost-rain over the west end of the Catalinas, but buildings were in the way of it. By the time we got to Mama's Pizza, the sunset was still blocked (mostly by the high school at that point), and the sunset was already fading. This shot was taken on the automatic setting, with the flash because I forgot to turn the flash off. It actually came out much better than the shots on the main "sunset" setting. I did basically no editing on this one except for resizing. 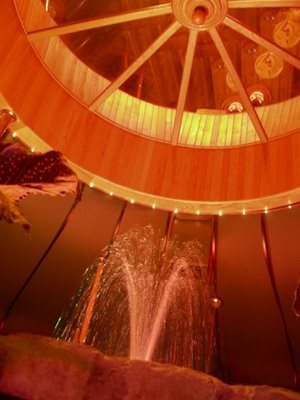 This fountain, and the mirrored, recessed wheel shape above it, are the most interesting feature of this particular Mama's location. Sound bounces off the inverted cake tin shape, reflecting conversations from the tables that surround it. John insists that he can hear conversations from two or three tables away. Me, I'm oblivious. 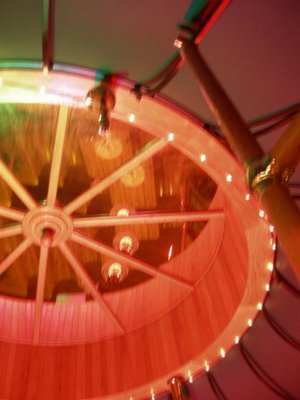 I really like the look of the thing, and the pattern of reflections seen in it. It was hard to photograph, though. I couldn't get far enough away and still see inside it. Also it's kind of dark in there, and lit with reds and oranges. John didn't want me to embarrass him by taking flash pictures in a restaurant, so I did the best I could without it. 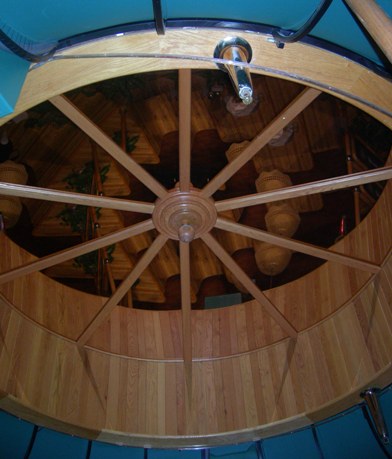 Oops! I turned the camera back on, and forgot to turn the flash back off! I don't think anyone even looked up when the camera flashed. Since I was pointing the camera upward, most of the light went straight up, and made little or no impression on anyone else. This shot makes the reflection easier to see, but the orange pictures are more typical of how the fountain-thing looks without unusual illumination.

This will have to do. It's late, late, late, and I'm going to bed. I'll fix any typos on Saturday afternoon.

I see blogging every day as falling under the old admonition to write something every day, even if it's a grocery list. I had decided not to blog on the weekends, but I've got something to say for today, so I'd best get writing...

I try my best to blog everyday, but sometimes it's hard. This is especially true at the end and beginning of quarters . Still, I try and often I write my best when I am on a posting streak.

Oh,and the reference to "Here Comes the Rain" reminds me of the Eurythmics. We had some rain last night and today has been cool because of it.