How Do I Know It's Christmas? 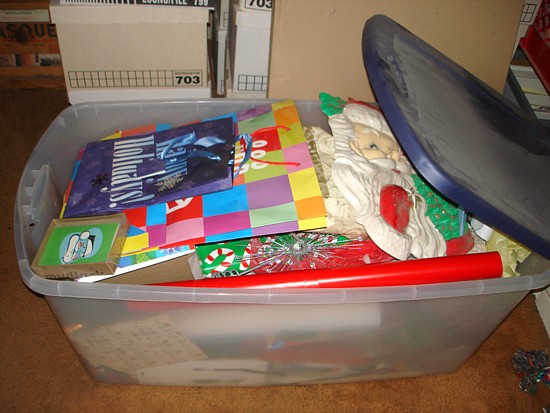 One of the Christmas boxes is finally off the top shelf of the laundry room.
You remember A Charlie Brown Christmas, don't you? Charlie Brown spends the first-ever Peanuts special feeling alienated and depressed as he tries to find meaning in the Christmas season everyone else seems to be enjoying. Snoopy is celebrating by entering a Christmas decorating contest, and the other kids are dancing, skating, and eating early winter snow as it falls. Charlie Brown eventually goes in search of a Christmas tree, and finds himself empathizing with a small, scrawny one whose needles are falling off. At the very end, Linus recites from the Gospel of Luke to tell Charlie Brown what Christmas is all about, and the other kids decorate his lowly tree and sing Christmas carols at him. This display of religious and community feeling and inclusiveness finally cheers Charlie Brown up, and he sings along.

I don't know about you, but I'm feeling especially Charlie Brown-y this year, disconnected from the rituals and culture of Christmas. With no job for over three months now, I can't justify buying presents for anyone except my dad, stepmother, brother and husband. Even those gifts will need to be cut back. John claims not to want anything, and we've agreed to buy each other only one gift and whatever goes in each other's stockings. "No candy this year!" John warns. Fair enough, but what do I buy him? The only thing he seems to want is a new iPod, and if I get him anything that extravagant he will probably return it. It's happened before. 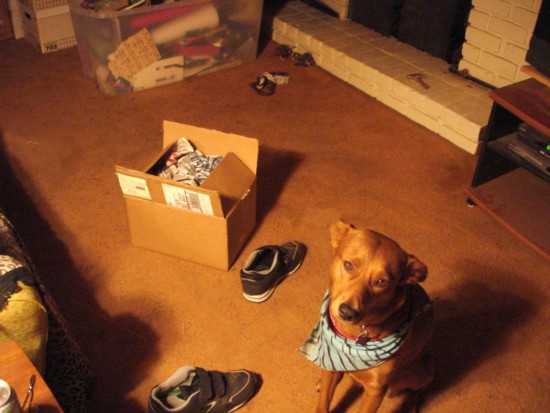 Jacob's box.
So I haven't bought a single present, and time is running out. The only saving grace is that I was finally able to pack up my godson Jacob's birthday and Christmas gifts. One of them I bought in mid-2007, when the local Discovery Channel Store was going out of business. The other, an autographed photo, I got at Gallifrey One in February. Jacob comes from a family of Doctor Who fans. I sure hope he likes this particular actress, and that the robot that's been sitting on my office floor, mint in box, for a year and a half doesn't seem too babyish to him now.

In looking for the right size box, I came across one with the dregs of stuff I carried home from First Magnus the day it went out of business and we all discovered we were out of a job. In it were a few things I was able to give Jacob as mathoms. 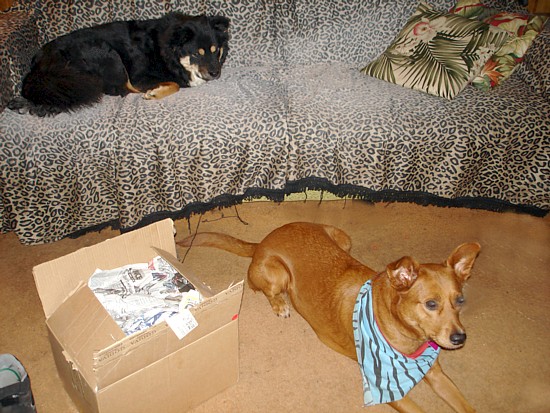 The box is packed. Now what?
Today is the last day to turn in an Angel Tree present at church for a prisoner's kid. I'll still do that, especially considering we haven't even done Toys for Tots yet. We always do Toys for Tots, no matter how broke we are. I hope it's not too late. 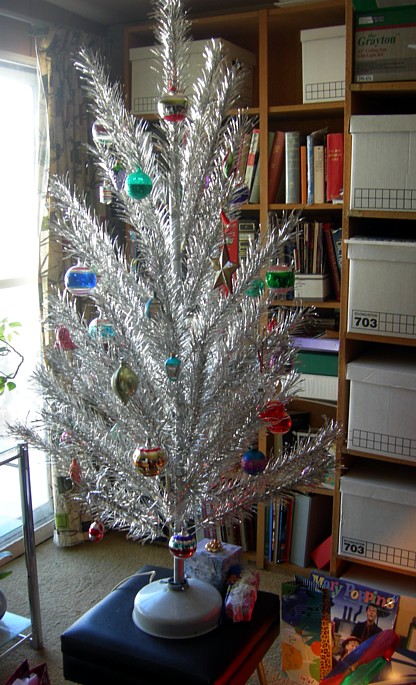 The vintage tree in a happier year.
And there's Christmas decorating to be done. If I put up the aluminum tree in its usual place by the sliding class doors in the den, it won't even be visible from the couch behind all those boxes. I'll have to get John to move those somewhere. A live tree is out of the question this year.

And what about Christmas music? It's been two years or more since I last found the Christmas CDs. No Robert Rheims, no Chipmunks, no Nat King Cole and Sinatra and Jingle Bell Rock. If I start going through boxes now, what are the chances of my finding the CDs by December 25th?

Yes, yes, spirit of Christmas. Jesus in Bethlehem, midnight mass, peace on earth, people smiling at each other on the street. I will try to find some feeling to go with my half-a-mustard-seed faith. But you probably won't see me smiling at strangers much except at the dog park, and my only contribution to the peace on earth part came on Election Day. Still, I'll do my best.

though we think "next year will be better"..and even if it is we've lost a whole year and life isn't long enough for those sort of things..

i wish i knew the secret to help you thru Karen..