Christmas Classics, and Not So Much

We accidentally got Santa Clause 3: The Escape Clause, in the mail a couple of days ago, having failed to notify Disney Movie Club (or whatever it's called) in time to prevent it from being sent to us by default. Having liked the first two movies in the series, I was not heartbroken that we got the third one. But much of it was painful to watch. It had basically the same strengths and weaknesses as Santa Clause 2, only more so. On the positive side, the sets, costumes and effects were wonderful, and the story of Scott Calvin's struggle to cope with family issues during his busy season as Santa was very touching and surprisingly real. On the negative side, there was an unnecessary and annoying B story, featuring a comic, obvious, terribly annoying villain. In 2 this distraction involved a despotic toy Santa (played by Tim Allen) who takes over the North Pole and nearly destroys Christmas. In 3, the bad guy was Martin Short as the scheming, cold-hearted Jack Frost, who takes over the North Pole and nearly destroys Christmas. Hmm, where have I seen that plot before? It's not that Short isn't funny (I find him rather hit and miss myself). It's just that the other characters should be noticing his sabotage every step of the way, but don't. That's bad plotting. And really, we don't need him. Another way could have been found to maneuver Scott into losing the Santa gig so he can fight his way back into it. 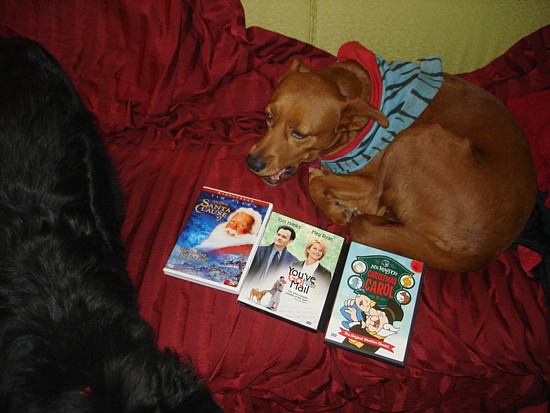 Pepper and Cayenne are less than impressed with The Santa Clause 2.

After watching this not-so-good DVD, I doubled back to watch the first two films in the series. The first one is flat-out great, well thought out and well written, with a simple story about Scott gradually becoming Santa and how that affects his relationships with his coworkers, son, ex-wife and her husband. The second one has a similar dynamic in the A story, with Scott needing to resolve his son's misbehavior issues while losing his magic and falling in love with his son's school principle. That part of it is great, but the toy Santa stuff is just annoying and over the top. 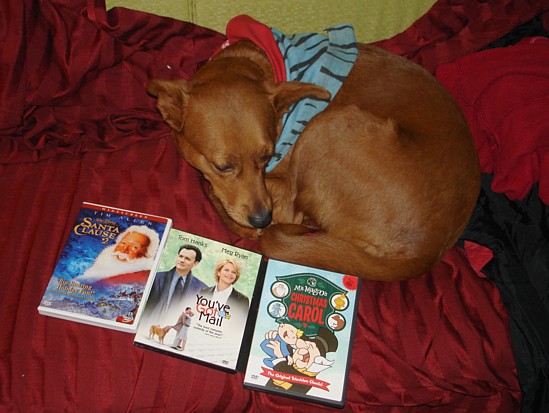 But Cayenne seems to like Mr. Magoo's Christmas Carol.
Christmas is full of classic and sequels and remakes. As with film and tv in general, not many of the sequels and remakes ever achieve "classic" status. I personally own four versions of A Christmas Carol on DVD or VHS, not counting the parodies on WKRP in Cincinnati and Quantum Leap. Of these, the George C. Scott one isn't bad, and The Muppet Christmas Carol and Mickey's Christmas Carol are plesant but forgettable. The only version that really does it for me is Mr. Magoo's Christmas Carol. I'll grant you that this is partly because it's the version I grew up with, and even I must admit it's not perfect, due to how much of the original story is missing. But the music is wonderful, the performances are excellent, and the dialogue is mostly what Dickens wrote. Good stuff.

I don't have a brilliant conclusion to wrap up this entry, and I've got to go to bed now. We'll continue this discussion in a day or two, because I want to get into the whole issue of reimagining characters and stories, and when it works and when it doesn't. Meanwhile, to all a good night!

It's been years since I watched Mr. Magoo's Christmas Carol. We have a DVD copy of the version Patrick Stewart did several years ago, and it is one of the best I've ever seen.

I haven't seen The Santa Clause 3 and am pretty sure now that I don't want to. I usually avoid #3's anyway unless the sequel was pretty amazing.

My favorite version of A Christmas Carol is Scrooged with Bill Murray playing the Ebenezer role, but you can't go wrong with Magoo.

While we're on the subject of A Christmas Carol (hey, you brought it up), you might get a kick out of this comic strip.