Round Robin: This Bird Has Flown; Goodbye to the 6

The latest Round Robin Challenge: Goodbyes, was assigned by our good friend Carly on the occasion of her retiring from co-hosting the Round Robin Photo Challenges. I was a little stymied trying to come up with something appropriate to the theme, until I looked in my January 2011 folder of raw photos. Ah. Perfect! 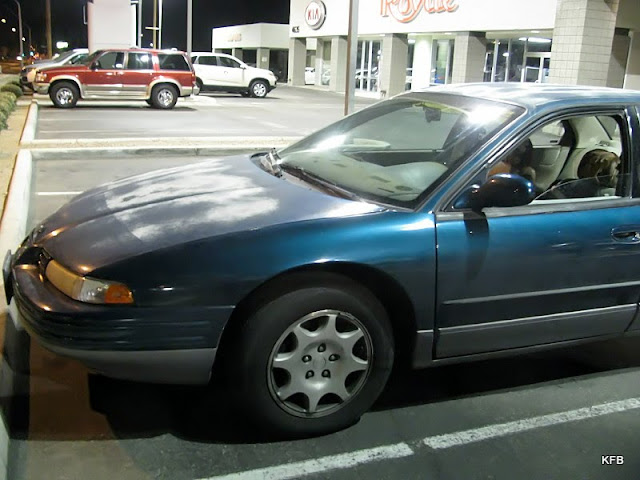 In late March, 2005, a kid in a 1965 Ford truck totaled my 1997 Saturn. The Saturn dealer didn't have another Saturn I could afford, but they did have a 1994 Eagle Vision. I'd never heard of this kind of car, but I bought it. For about five years it was my good and faithful car, my conveyance to numerous adventures and a source of endless amusement with its outside temperature thermometer. But in 2010 I had to put over $2,000 into repairing it - and that's without fixing the broken interior door handles, the warped panel over the airbags, the worn out paint, or the car stereo that shorted out years ago. When early this month my repair shop told me it had sprung numerous transmission leaks, I knew the time had come to say goodbye to my 17-year-old Eagle. 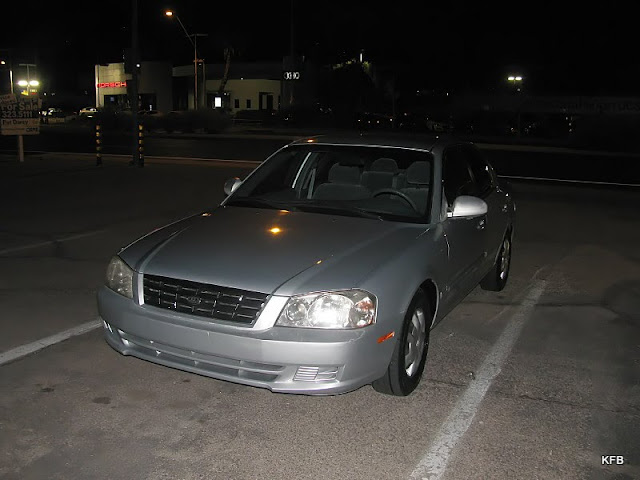 So on Tuesday, January 11th, after several days of research and test drives, I bought a 2001 Kia Optima. Hey, it's only a decade old, and doesn't look half its age. I've already started having adventures in it, including two trips to Phoenix and some hairy mountain driving. 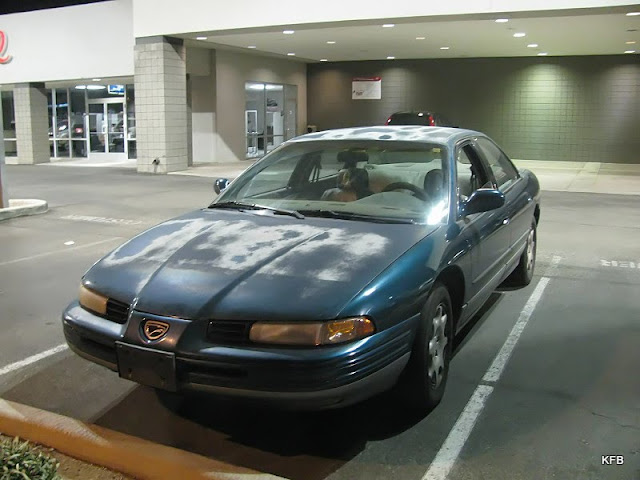 But later on the night I bought the Kia, I went to open the trunk, only to discover that the key in my hand was the one to the Eagle. Oops! I drove back to the Kia dealership, which was closed by then, hid the key in the glove compartment, and took the opportunity to take a few final pictures of the Eagle - in effect, to say goodbye. 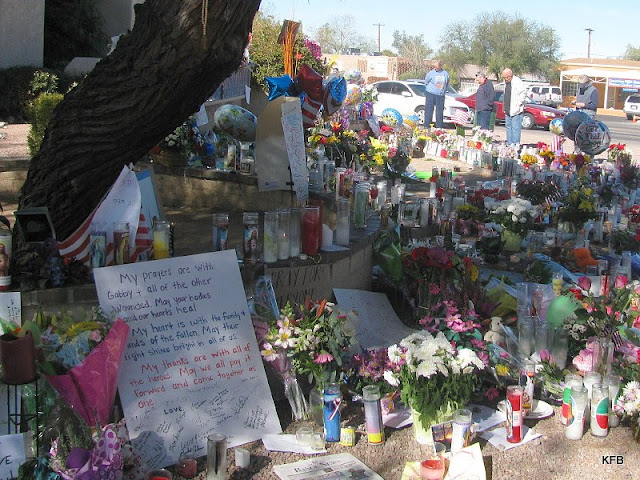 But of course, that's the least of the goodbyes that took place in Tucson, Arizona this month. As I sat in a car dealership on Saturday morning, January 8th, my congresswoman met with a small group of constituents in a Safeway parking lot across town. You know what happened next. 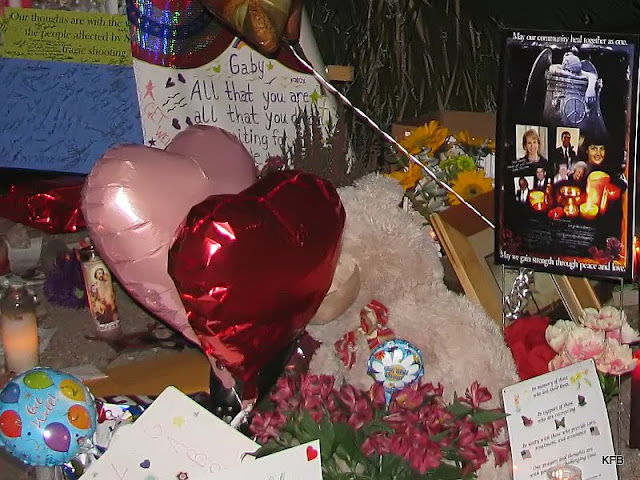 With all the focus on Gabby Giffords and her remarkable survival and recovery-in-progress, I think there's a danger that the rest of the country is already starting to forget about the six people who died that morning. Tucson has not forgotten. Thousands of us attended various memorials and funerals to say goodbye to those six people, whether we personally knew them or not. 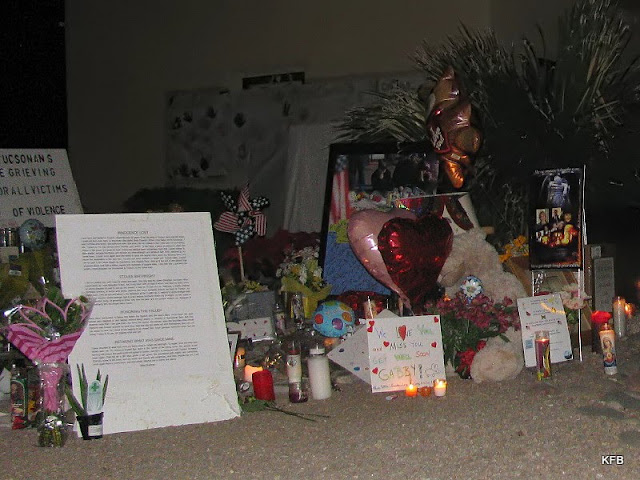 I never met any of the six, as far as I know. But I have been to one of the places where Tucsonans have gathered to remember, to pray for the living, and to say goodbye to the fallen. Here, too, much of the focus is on Gabby, our fellow Tucsonan who has become a symbol of hope. But many of the signs refer to the fallen, and candles have been lit to their memory:

Now let's go see what or whom everyone else is bidding goodbye!

I know what it is to say a sad goodbye to a beloved old car. They develop personalities, and it's like losing a friend when they go.

I'm glad to see you remembering the other victims of that awful crime. We do tend to forget the less well-known ones, sad to say.

Good luck in taking over the hosting of Robins!

I'm going to start with the sad - the incident that took the 6 lives. It was just last night I mentioned that the only thing I hear about is the congress woman and nothing about the other victims. While my prayers go for Gabby, I think it's important the others aren't forgotten - nor their families!

As for the car, I can relate. It looks like my fun fun fun 95 Honda Passport has seen it's last days. I cracked the engine block or something ... my husband knows. It's going to cost more to fix than to buy another. We don't buy new cars - I refuse to make car payments! Anyway, I wish you many fun and safe adventures in your new car. =)

Hon, this might be one of your very best entries. You made me smile with the tale of finding your new ride, ironically, I owned a silver Kia in 1997 and traded it in in 1998 for a white Saturn! LOL. Anyway, your new silver Kia reminded me of the one I owned, and would have kept longer, had it not been awful with the brakes. I went through 3 sets in 2 years. Long story, but I do so love those cars!

I am still so shocked about what happened in Tucson. It hasn't even been a month, and the story has taken some strange (think Palin) and unusual turns. Still a lot of things to consider and more information needs to come to light, but when it comes to the people who lost their lives... well... I don't think I will forget them.

I still remember the victims of the Lubby's Massacre in Texas in the 90's. Dr. Michael Griffith's story especially touched me. He had been hungry the whold day for a slice of pie from Lubby's so he went there on his lunch hour, only to meet a gunman intent on violence. Dr. Griffith was a veternarian, and quite popular in the area. When I think about him, I think about Dr. B and how heartbroken everyone would be if something like that happened to him.

I am rambling on a bit, there is still a lot to say, but it's a debate for a lifetime I am afraid. Especially when one side refuses to consider any alternatives to our current laws. So sad.

Anyway, this was a touching entry, I appreicate your acknowledgement of the 6

Just had to comeback and say Thank You for the comment on Ellipsis! It meant a lot! Oh, and I also wanted to tell you that I think the new move puts me roughly 19 miles closer! Not a lot in big picture, but if you are walking, those 19 miles mean a lot! ROFL! I should check Google maps for fun, and see how close or how far it is! ;)

Oh good idea to bid farewell to a vehicle. I didn't think about that. :)

I've read about the awful crime in the newspapers but didn't realize that it's in your hometown....condolences to the late victims.