Weekend Assignment # 338: What a Wonderful World

I'd better get on with answering my own Weekend Assignment: 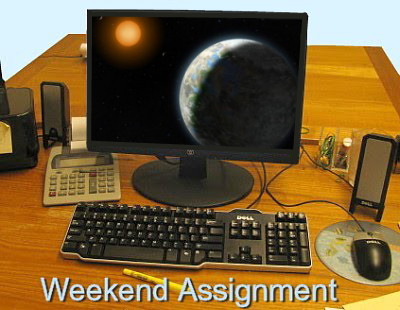 Weekend Assignment #338: A World of Their Own

Even as astronomers discover planets that may be capable of supporting life, such destinations remain out of reach of would-be human colonists, even if the world is "only" twenty light years away. But if some science fictional technology were discovered in the next year or two (warp drive, matter transmission or whatever) that made it possible to leave Earth behind and go live on another planet, would you be tempted to do so? If you choose not to relocate, would you be interested in just visiting the place instead?

Extra Credit: If you did go, whether on vacation or as a colonist, and you were only allowed to bring one small suitcase with you, what would be in it?

Last week there was a bit of a media flurry about the discovery of a "Goldilocks planet." That's a planet whose orbit around its sun makes it not too hot, not too cold, but potentially "just right" for life to develop. I found out about this via my Facebook "Home" page, on which someone had posted a link to the NPR article about the discovery. That Facebook link attracted a large number of comments, some humorous, some political, about who should pack their bags and move to this other planet, twenty light years away. It was pretty evenly divided: many of the people humorously claimed to be packed and ready to leave, just on general principle; others wanted to ship tea party folks or some other political group off to the planet, so that Earth could be rid of them; a third group wanted to lead a group of their own political persuasion off to the new planet, leaving Earth to the reactionaries (or whoever).

Joking aside, I don't care for that kind of political rhetoric. We're all from this planet Earth, and we all have the rights and responsibilities that stem from that, to take care of the planet and to get along with each other as best we can. The first people to go live on a different planet (if this were possible, which certainly isn't true now and may never happen) would be the lone wolf explorers, the risk-takers, the trailblazers, the visionaries, not people who happen to hold one set of political views or another. As much as I might like to think so, that's not me. Still, the time might come, as in the 1600s, when people of a particular political, philosophical or religious persuasion might band together to colonize a planet together, not because they've been kicked out of Earth but because they see another planet as providing opportunities for a better life, lived according to their own principles. And once a planet is tamed and settled, it may well provide vacation or research opportunities, without the long-term commitment.

So let's say it's 2015, 2050 or 2110, or some other arbitrary future date when the many problems surrounding the prospect of interstellar travel over vast distances have somehow been solved. Medicine has also made miraculous advances, so I am more physically fit and mentally alert at age 93 (or 153) than I was at age 30. (Yes, this is a fantasy scenario.) I don't even need glasses any more. The Goldilocks Travel Bureau is offering one month, one year and lifetime (one way) excursions to the planet Horton. The trip by wormwarp luxury starliner (with five meals a day, onboard entertainment and a swimming pool) takes just three days each way. Am I going? If so, what package do I choose? 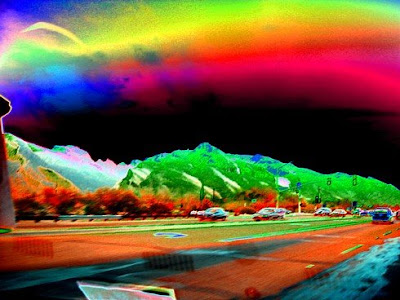 First off, I want to know whether John is going too. I asked him, and his answer boiled down to "it depends." "I'm certainly not ruling it out," he said. So let's say the conditions are right. We're healthy and wealthy and bored, and we can even take our dog Ponsonby with us. Okay, then we're going! But for how long? I don't know about you, but I find the ends of vacation trips rather frustrating and depressing. I never feel we've done and seen everything there is to do and see. And a whole new planet - there should be a lot to do and see, right? If this is a human-friendly environment, there's a good chance that Horton has as much environmental variation as Earth - hot places and cold places, oceans and rivers and desert, mountains and plains, and a whole new set of flora and fauna to admire. Yeah, I think we'll take the one year package, please.

And if we get bored or overwhelmed, I'm sure we can find a quiet place somewhere on this newly-tamed planet that someone has fixed up with all the comforts of home, by which of course I mean an Internet connection. Well, and Earth crops. Give me a computer with access to all the books, tv, films, periodicals and social networking in the known Universe, and access to chocolate, diet orange soda and other necessities of life, and I'll be happy. I'm sure I can handle a year without DVDs or vintage toys. As long as I can still watch Doctor Who and go to something resembling a church on Sunday, even if I do so virtually, I'm golden. Wait - on second thought, I'd better bring a camera and a PDA or laptop for the trip over. I'm assuming there will be facilities for cleaning and replicating clothing.

When the year is over, though, I'll be glad to go home, back to the familiar lands of Earth, the silly possessions that clutter the Museum of the Weird. Maybe by then we're in a big house and all our stuff will be nicely organized instead of in boxes. That would be nice. In any case, I'm sure I would be struck anew by the wonders of Earth, the mountains, the plant life, the birds and beasts and especially the dogs.

Yeah. That would be good.

Hmm, I don't know about those one year trip. I think that after a couple of months, my wanderlust would be gone and I would want to either go home, or, if not possible till the end of the year, I'd settle. Make a home and a life on Goldilocks, fill it up with junk so that by the time I have to come back to earth it's a real pain to have to move again...

Pretty thorough response, and well-thought out.