My October 2006 Weekend Assignment entry, Classic Spooky Music!, always gets hits and a new comment or two at this time of year, all because of a mini-rant toward the end of the entry. Here's the relevant part:


Still, classical music does deserve its rightful place on the Halloween playlist. On the Fantasia soundtrack alone (which I bought on LP back in college, and had to exchange several times due to a bad pressing) has Bach's Toccata and Fugue in D minor, the quintessential spooky organ music, plus Modest Mussorgsky's Night on Bald Mountain. (Actually, I was reading today that the Fantasia version of Night on Bald Mountain I know was heavily revised by Nikolai Rimsky-Korsakov and Leopold Stokowski.) 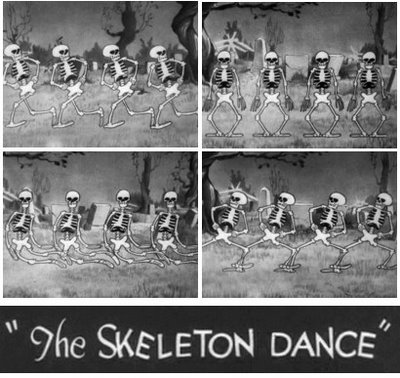 But my favorite spooky classical piece (albeit less so now than when I was a kid) has always been Danse Macabre by Camille Saint-Saëns.(Listen to it here.) It's based on a medieval allegory about dancing skeletal figures from all walks of life - the rich and the poor, the powerful and the peasants - all called by Death. (Hey, these people were dealing with the Plague.) I remember being exposed to this musical masterpiece back in elementary school, and even seeing a cartoon that went with it. But like that blog entry about spooky music, I can't prove that what I remember ever existed. Yes, there's a great Disney cartoon called The Skeleton Dance, the first Silly Symphony ever made. I've even read claims that the music for that was the Danse Macabre, or, at least, that brilliant cartoon composer-arranger Carl Stalling adapted the Saint-Saens for it. But it just doesn't sound like it to me. Ah, well. Next you'll tell me there is no wooden bridge in Lucerne, Switzerland that depicts the Dance of Death on its wooden panels. But there is. I photographed it when I was 15 years old. And no, I don't have the pictures. 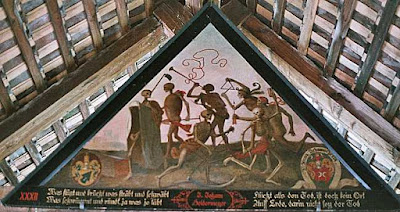 one of the Totentanz [Dance of Death] paintings under the roof
of Spreuer Bridge in Lucerne, Switzerland (photo credit)
Extra Credit: well, I am a little spooked that I can't prove what I remember, and also that it's past 2:30 AM already!

Update: a year later, this entry is getting a lot of hits as people search for info on that Danse Macbre filmstrip and such. And guess what? Someone tracked it down! Please see the comment thread for further info, and thanks for stopping by! - KFB, 10/28/07

The most important part of that entry is the comments section, excerpted here:

J said...
I found info on that Danse Macabre filmstrip from when we were kids. It's a music appreciation series and came with one cassette tape and 2 filmstrips. It came from what is now known as Educational Record Center in Wilmington, NC and they say it's "no longer available in any format." Sure wish one of those teachers out there with access to it would put it on YouTube!
Wed Oct 17, 08:10:00 AM MST

Anonymous said...
I too remember seeing this Danse Macabre film strip at a school, around about Halloween 1981. There seems to be a "Second Edition" of an animated Danse Macabre available on DVD here: http://www.clearvue.com/productDetail.asp?objectID=21442 (this page contains a partial preview viewable via Mediaplayer or Quicktime) Any chance this "Second Edition" is adapted from the same filmstrip? The "animation" seems to be created from still images (unless this is an artifact of the preview). In my memory, the animation was "darker" different but I'm not sure I trust my memory!
Wed Oct 31, 09:42:00 PM MST

Karen Funk Blocher said...
Re that music appreciation DVD clip, it does seem likely that it's adapted from some set of still illustrations, such as possibly that filmstrip. I kind of thought what I remembered was black and white, but a) they could have colorized it, and b) my memory could be tainted by the Silly Symphony. Thanks for the detective work, folks, and I hope you all had a great Halloween (2006, 2007, or whatever year you read this)!
Wed Oct 31, 10:03:00 PM MST

Zim said...
i know this is a little late...But...Yes it is adapted from it. I previewed it and I would recognize those bags of bones any day. And yes, though Disneys was in black and white this was in color. I have been making it my mission to find this frakin thing ...this is close enough. Bummer its not the first edition. One day we might yet find it. Oh and Skeleton Dance is not set to Dance Macabre. But I still am asking myself if the last scene in Halloween is Grinch night is somewhat Dance Macabre. I think it is. Thank you guys for finding this and Happy Halloween!!
Wed Oct 01, 04:17:00 PM MST

johnfinegan said...
I'm probably pretty late to the conversation, but I remember that filmstrip I last saw in 1974 like it was from 1990 ... which is to say I remember parts of it very vividly, but not every part of it. Most notable in my memory was a recurring (and chilling for a small kid) still of a skeleton face wrapped in a green cloak (over his head) with a violin under his neck. You could see his skull face (as opposed to a similar still from the link (no longer working but I searched to site linked to and found it)). And the art work was much better/more detailed than what is in the animations at the link. So good, in fact, that I would have thought the art work would have stood on its own and that the filmstrip cobbled it together for use with Danse Macabre. It really was quite well done for such a simple medium, and like others, I have spent much time searching for it, or the art work, online.
Thu Oct 02, 12:31:00 PM MST

Anonymous said...
Found it! I too was fascinated by this film strip as a kid in the early 70s. I recently purchased the film strip and audio cassette on ebay. It is from a company called Educational Audio Visual, illustrated by Harold Dexter Hoopes. I have no projector but it looks just like I remember it. I want to make a transfer and post it on YouTube or something. Any thoughts on how to make the transfer?
Thu Aug 13, 08:56:00 AM MST

Karen Funk Blocher said...
Anonymous - I think if you do a little digging, you should be able to find a video transfer service to do this, perhaps even locally if you live in or near a city. Good luck!
Fri Aug 14, 03:19:00 PM MST

Anonymous said...
Anonynmous 10/31 9:42 here again (last post was in 2007!) As noted above, the link I first posted is no longer active. But here's an updated link from the Clearvue website: http://store.discoveryeducation.com/product/show/51089 The DVD is still $30, which is expensive for a 10 minute clip (albeit intended for purchase by educators). However, what's great is that on that page you can now preview the entire 10 minute DVD (audio and visuals). I'm still not sure if this "2nd edition" features the same art as the original many of us saw in the 70s or early 80s. Some posts above support a different artist, particularly the information that the filmstrip artist is Harold Dexter Hoopes. The "2nd edition" would appear to be by an artist named David Prebenna: http://www.powermediaplus.com/furtherLearning/pdfs/CL1179-CVXTG.pdf
Tue Oct 06, 08:01:00 PM MST

ande said...
9/1/10 LOL The video available is NOT the original filmstrip GenX was shown. It's the 2nd edition from ~1985. I too was deeply influenced by the artwork from the original filmstrip, published around 1965 when the world was a scarier, richer place. To transfer film, take it to a video specialist. Find 'em in the phone book. They can scan each frame onto a DVD and you can throw it together using any music/video editing tool out there. Tons of free ones online. For a bit more, they will do it for you. I don't need the music, but I would pay for a copy of the 1960s artwork. The company told me if I could find it, it would be OK to publish it on YouTube, giving proper credit-and-all. If someone has access to this... I will pay $100 for the filmstrip itself in viewable condition, or a "fair price" for a CD of hi-res scans. seriously. LeftHandedGoth@yahoo.com
Thu Sep 02, 02:47:00 AM MST

Anonymous said...
I have also been searching for this for years. My elementary music teacher showed this every year at Halloween (early 80's). Everyone kept telling me I was remembering "Dancing Skeletons", but I knew better. Hope to get a copy in some digital format to show to my kids.
Fri Oct 29, 10:24:00 AM MST

Obviously, I'm far from the only person who remembers this Danse Macabre filmstrip fondly, and would love to see it digitized. So, here's my challenge to the world: make it so! 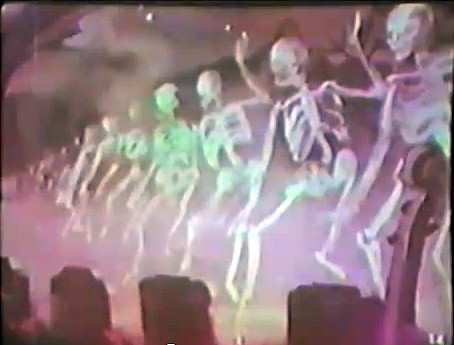 One frame of the c. 1965 Danse Macabre filmstrip,
with art by Harold Dexter Hoopes.
I've boosted the colors and adjusted tone to
try to restore the time-faded image.
UPDATE: It's here! It's posted! Hooray! The artwork is great, albeit faded and could use a bit of restoration. Thanks to all! KFB 11/1/10

Meanwhile, there are a number of videos on YouTube featuring the Danse Macabre, including the 1980s one mentioned above, which is apparently a completely separate production from the 1960s one. None of the YouTube videos are as good as that darn filmstrip is in my memory, but they're worth checking out! There are a few original animations there, and others are illustrated with medieval artwork. There's even a silent film, accompanied by a 78 rpm recording. 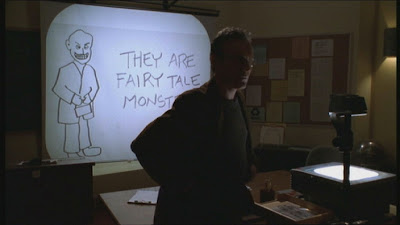 Oh, and by the way, if you're a Buffy fan, you've probably heard Danse Macabre. That was the music Giles played to go with his transparencies about the Gentlemen in the classic episode "Hush. " Which leads me to wonder: did Joss Whedon also see the filmstrip growing up? Someone has posted a rather wonderful seven minute version of the episode on YouTube, beautifully synched to Danse Macabre as a soundtrack. Classic!

And a further note about the Disney Silly Symphony "Skeleton Dance." The same year, 1929, a Mickey Mouse cartoon called "Haunted House" reused part of the animation of the dancing skeletons. While not as good as the Silly Symphony itself, the Mickey cartoon is a bit of a breakthrough in that the music is integrated into the storyline, with the house's spooks forcing Mickey to play an organ so they can dance to it. Both cartoons can be seen on YouTube.