Round Robin: The Snake and the Lizards (A Tale of Two Bridges)


Here's my other entry for the Round Robin Challenge: Bridge. If you scroll down for the first one (and I hope you do), you'll see photos of bridges all over Tucson, taken over the past several years. The photos in this entry, on the other hand, were all taken today, and concentrate on two specific, very unusual bridges.

You may remember (or not!) that in January 2008 I had a mini-adventure of a photo shoot, hiking around downtown Tucson for a Round Robin Challenge called Landmarks. I took many pictures that day of the Diamondback Bridge on Broadway just east of downtown, for a blog entry titled Round Robin (Part One): Crossing the Snake. There were some cool shots in that, but I wasn't really satisfied. As you can see, this concrete and steel bridge is in the shape of a Diamondback Rattlesnake, from head to raised rattle tail. Problem is, there is no really good vantage point for photographing the entire bridge. Narrow objects a few hundred feet long aren't the easiest of subjects. Compounding the problem are the trees on both sides of the road, which obscure details.

But I had an idea. There is a skyscraper downtown called the Unisource Energy Tower, formerly the United Bank Building. It's the tallest building in the area, and close enough to provide a good view across the intervening buildings and down onto the bridge from above. Maybe. So this afternoon I drove down to Congress St., parked and fed the meter, and headed over to the distinctive building, intending to take the elevator inside all the way to the top. First problem: even if you take the right elevator, you can't get to then 23rd floor without a keycard and a code. Second problem: even on the 22nd floor, there is no window that is not in someone's private business office. I didn't want to barge in to a high-priced accountant or law office and ask to take pictures out their windows, so I left.

Well, that was fun.

Next I drove over the construction firm whose parking lot is adjacent to the Diamondback Bridge. I might not be able to get better pictures than last time, but at least they would be fresh ones. Here are a few of them. 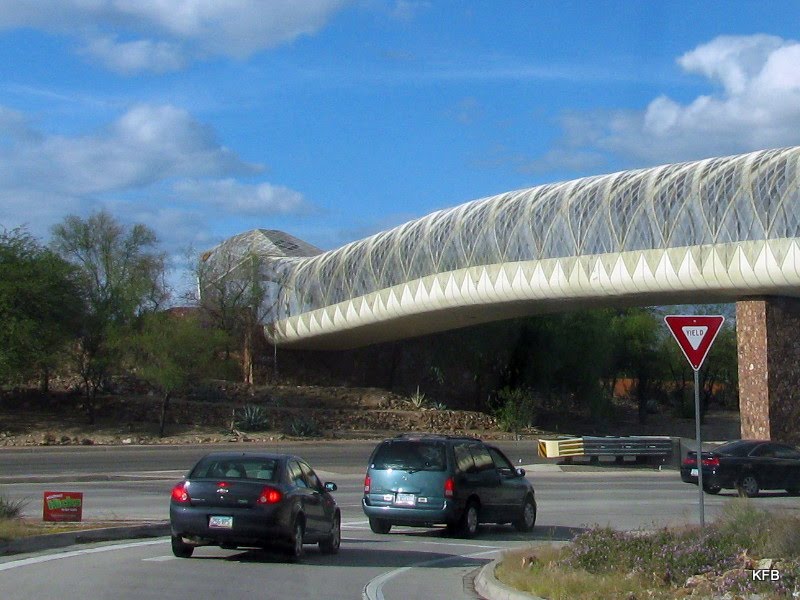 Here's the head and part of the body, as seen from the southwest. See what I mean about the trees?


And here's the tail, as seen from the walkway leading into the bridge itself. The snake's concrete and steel body is designed for bicycles and pedestrian traffic only. The tail is strictly ornamental. 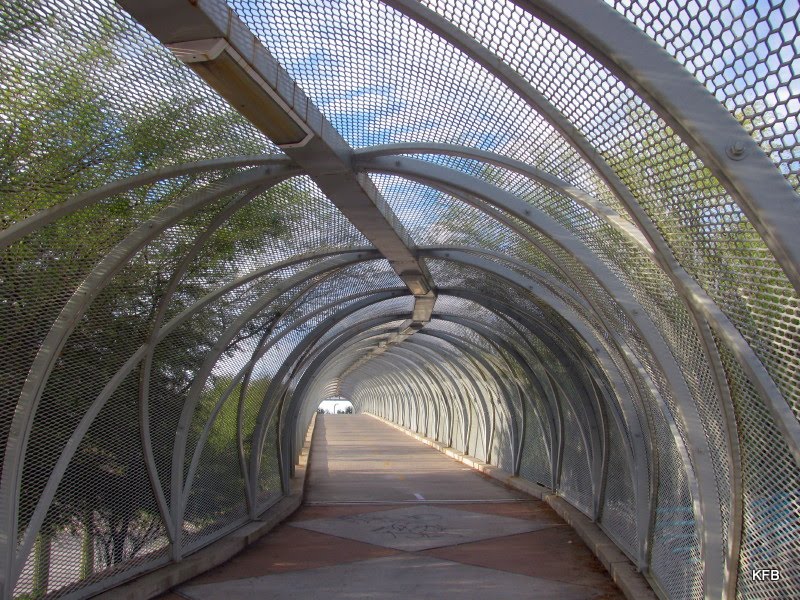 Here's how it looks on the inside. Unfortunately it is not quite as nice as it was a few years ago, due to tagging and places where the paint (possibly more than paint) has been scraped away. 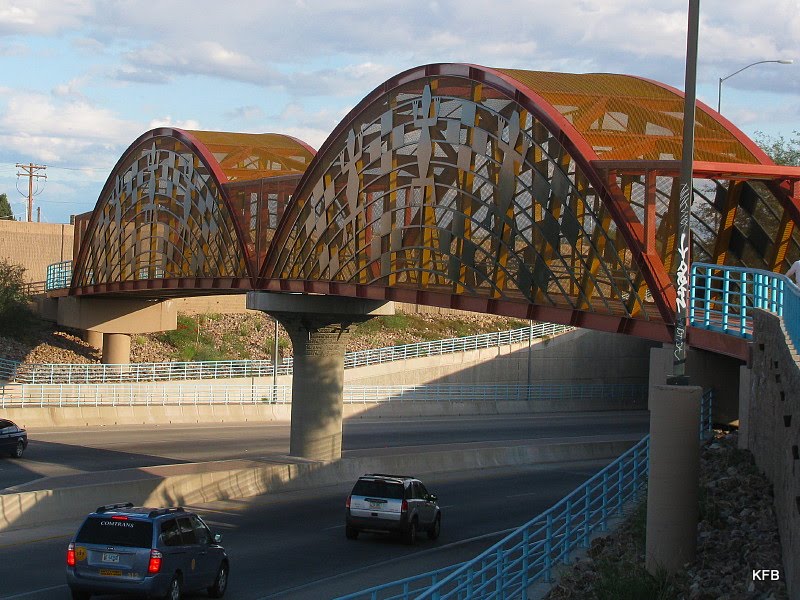 What I didn't notice the last time I visited the Diamondback bridge is that if you follow the walkway south of the tail, you come to another bridge I've been trying to photograph for years. This one is a little over three years old, if I recall correctly, and a little tricky to get to. I usually pass it on an adjacent highway at 55 mph! But on foot it's just over a quarter mile from the Diamondback Bridge, as I discovered late this afternoon. Like the giant snake over Broadway, this bridge has a motif honoring the local fauna. The sides are covered with stylized lizards, probably inspired by designs on petroglyphs. 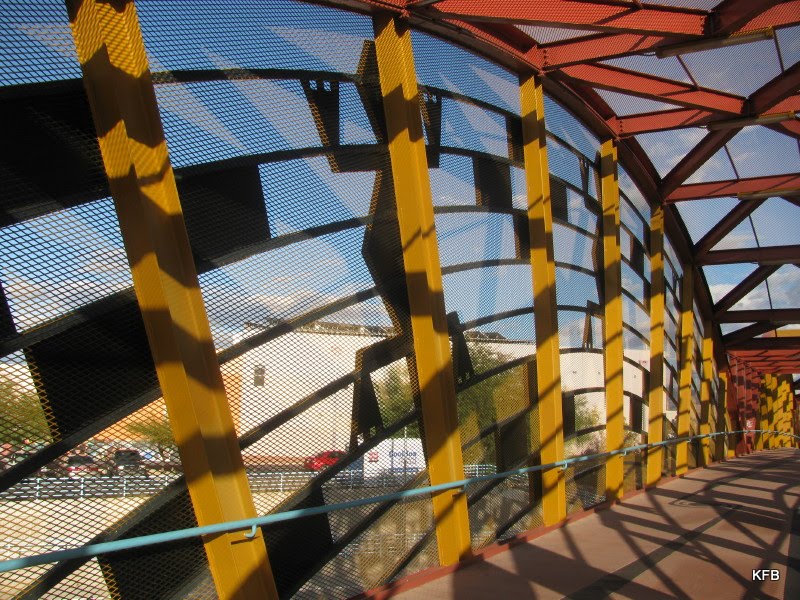 This is another bridge for pedestrians and cyclists. Inside it's just as trippy as the snake bridge. 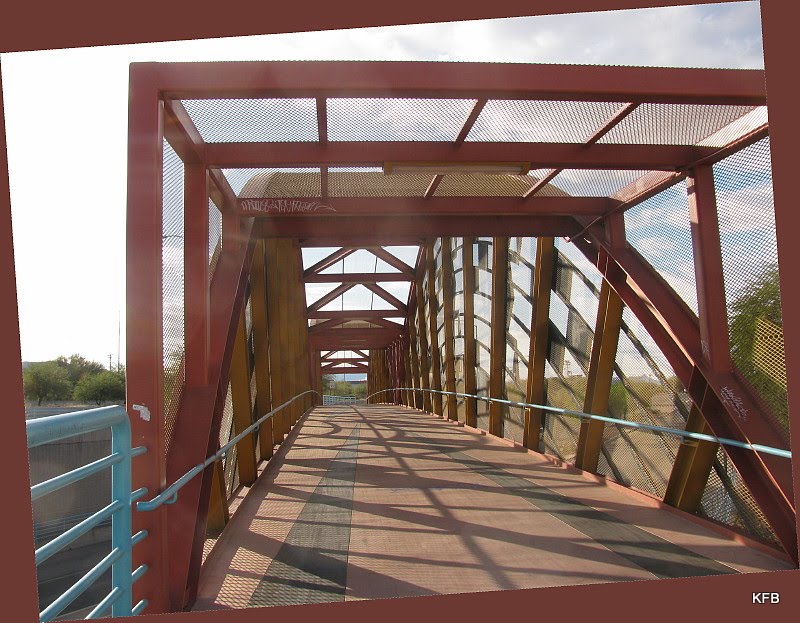 With its rust red and school bus yellow girders, it could almost be a ride at an amusement park. Whee!

Please scroll down for a tour of other Tucson bridges, pulled from my archives and in some cases newly reedited. Then check out the other Robins' bridges:

Sandy - Posted!
From the Heart of Texas
http://sandyfromtheheartoftexas.com

Kat - Posted!
In My Dreams I Can Fly...
http://inmydreamssfk.blogspot.com/

Be sure to check out "The Bridges of Pima County" as well!

These are great! Wonderful and unusual. I'm heading on to your next post. Thanks for sharing.

That is a very cool bridge!

Wow! Those are two very interesting bridges especially the Ratttlesnake one. Very different! Thanks for sharing!!

Sandy
from the Heart of Texas

Yay it's beautiful!! The first one looks like a huge snake. Thanks for sharing!
Bridges

As much as I hate snakes, I LOVE the snake bridge! =) That is really something else. The other was interesting too.

Well, that snake bridge is definitely the most interesting bridge I've ever seen! I love that they took something so utilitarian and made them objects of art!

Awesome! I don't think either of those bridges were there when last I visited my birth city. Off to take the rest of the tour.

You sure have some unique bridges in your country! my favorite is the snake bridge.