Round Robin: Memories of Childhood, Not All of Them Mine

Hi ho! This week's Round Robin Challenge: Childhood Memories, comes to us from Monica of the blog Shutterly Happy. Many of the exhibits here at Casa Blocher, the Museum of the Weird, are kid-related, and over the years I've shown you lots of them: my battered plush dog Trophy, John's Handy Andy bulldozer, my Barbies along with all their friends and relatives, Chatty Baby in two different hair colors and many more. This time out, let's skip over all of those and focus on other vintage items in our collection.


John has spent much more time on eBay than I have over the years, so let's take a look at a few items from his collection. The toy soldier in box is from the Marx "Warriors of the World" collection. The colorful plastic frogmen are powered by baking soda, and originally came in Kellogg's cereal boxes. The yellow dinosaur, as far as I know, is just a yellow dinosaur. The autographed baseball he got as an adult. Can you tell what famous Japanese player signed it? 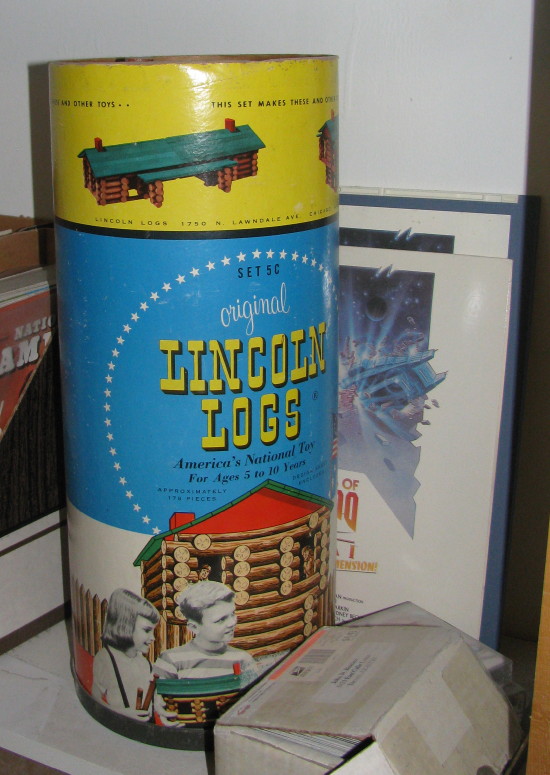 This one is probably more universal for children of the 1950s and 1960s. Display space is at a premium here at the Museum of the Weird, so these Lincoln Logs are "on display" in John's office closet! My exposure to Lincoln Logs was mostly at Pebble Hill School in DeWitt, NY, where I spent the second half of kindergarten. We also had Mr. Machine! I always wanted one of those.


Let's move on to some of my childhood mementos. Like John, I've repurchased some stuff I had as a kid, having managed to hang onto very few of my original childhood things. But the china dog on the left has been with me since 1964 or 1965, when he arrived on a planter someone gave my mom. A few years later I appropriated him for my china animal collection. He's named Heather, after a dog my friend Cindy R. had before I knew her. He's been broken and glued back together, but what of it? The memories evoked by this battered relic are intact.

The mother raccoon with her cub are a repurchase. I used to buy bone china animals in sets of three, little family groupings glued onto a white card for display in the few stores that sold them. Originally they cost $3.00 per set, but got as high as $3.75 or even $4.00 by the time I stopped buying them. It took me a while to save up for them at 50 cents a week in allowance! The day I bought one such set at a store in Shoppingtown (DeWitt, NY), I found a $10 bill. The store owner hung onto it for me, and if nobody claimed it in 30 days I would get to keep it. And I did! I almost certainly spent it on china animals, or possibly plastic ones in the Britain's Limited zoo and farm animal collections.

The raccoon bone china grouping, to which the figure above belongs, I remember especially. I used a file to separate the baby raccoon from the mother's mouth, so that I would have an extra toy animal and more versatility for our games about the animals' adventures. I came to regret this, but it kinda worked! 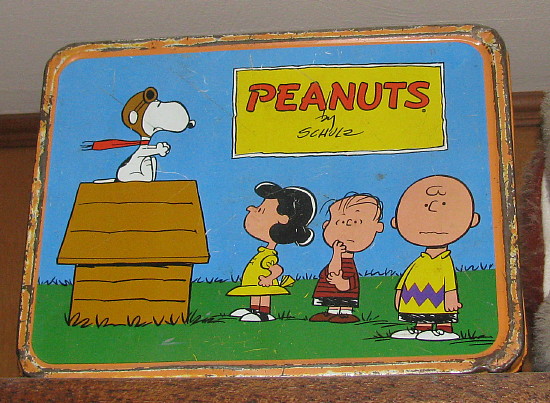 This Peanuts lunchbox dates back to about 1964, when my friend Joel used to bring his lunch to school in it. I always loved that lunchbox, and when I happened to mention it to him some years back he sent it to me. His late mother had later used it as a paintbox, and it's clearly quite battered. But I don't care. Joel also had a great collection of Hungerford Peanuts figures back in the day, and a great Viewmaster collection. 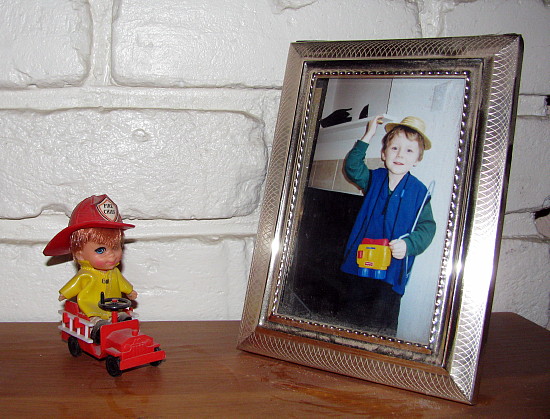 And here we have two boys with hats! Bunsen Bernie Kiddle is the only doll I'll be showing you today. The kid in the picture is Jacob, my godson. I've only seen him on two occasions since his family moved to Los Alamos when he was a little boy, but his parents send me photos. He's 13 now, I think. So my memories of Jacob as a child are somewhat limited, but still precious.


Here are photographic memories that are barely mine at all. My mom had a copy of this portrait of her younger self (right) on her vanity when I was a kid. When I was a teenager she gave me this double frame with two pictures, one of her sister and one of her mother. I think the shot on the left here is the one of Aunt Flora. Flora M Johnson was an engineer who helped to design the Interstate Highways along the eastern corridor. I don't know the details, but I like to think that Route 81, which we took many times to visit Grandmother and Aunt Flora in Fairfax VA and sometimes in Florida, was partly her accomplishment. 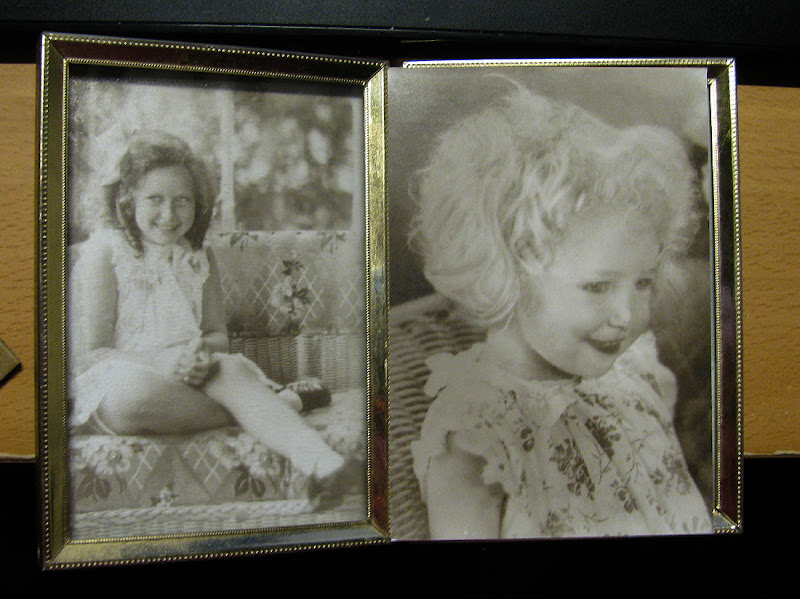 What of the other portrait, the one of my grandmother, Flora D Johnson, nee Dufour, at one time Flora D Ballantine? If I don't have the two portraits mixed up, here she is on the right. I've had that photo buried under the Aunt Flora one for the past eight years or so, because, well, my mom is far more important to me. But let's let little Flora out for a while, in front of Flora-on-the-floral-couch!

Quiltworks - Posted!
World Through The Eyes Of A Fiber Artist
http://quilt--works.blogspot.com

Sandy - Posted!
From the Heart of Texas
http://sandytrefger.wordpress.com

If you like the Round Robin Challenges, please check our other memes. Click the logos to be redirected to this week's assignments: 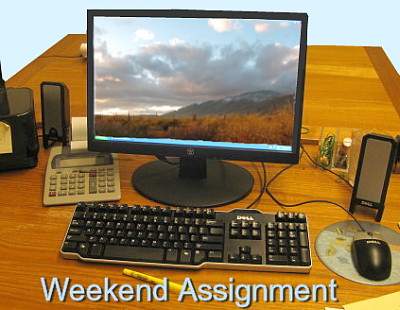 The Weekend Assignment,
hosted by Karen and Carly


This week: Weekend Assignment #306:
What's the Name of Your Book?

If you click on this site here we can promise to take you back to some childhood memories ...

Oh wait, I'm not selling anything! =)

I enjoyed your entry, especially the old photographs. Interesting about your Aunt Flora, I imagine I've been on some of the highways she's responsible for.

Well I do remember Lincoln Logs and lunch boxes :0) I never had a lunchbox just brown paper bags. How sweet of your friend to gift you the lunch box you liked!

Fun! I am always amazed by the Museum of the Weird. The lunch box is cool, I had no idea Peanuts made them so far back. I don't know, I guess I always think of Peanuts having been specifically from my childhood because of all the TV specials. I forgot that it was older then that. LOL. Loved the old photographs. I don't have any pics left of my mother, and only a few of my dad. Never photos together... lol... oh well. Memeories work fine for me.

Some of the pictures didn't come through for me but I enjoyed the ones I could see. I get a good view of your memories through them.

How cool! Makes me wanna sing the Streisand song "Memories".
As I often say, you've outdone yourself again!

I'm amazed that you still keep some of the yesteryear's toys!Mine are all gone, so I had to raid my son's collection. Both of us are allergic to dust and dust mites, so we tend to get rid of unwanted items in the home to minimize dust built up.

I never had a lunchbox in my whole life. I was always home for lunch, because in Germany school was only in the mornings.