This week for the Ellipsis Monday Photo Shoot, Carly wanted to see peaceful places. Is it possible to be terrified and peaceful at the same time? I'm not sure, but I certainly experienced both last Sunday afternoon on Sentinel Peak, also called "A" Mountain.


Sentinel Peak is on the western edge on Tucson, just west of downtown. Before the Spanish arrived, it was a lookout point for the native peoples who lived here. Nowadays it's a popular spot for looking out on the city. Here is a pre-sunset view of the Santa Catalinas and much of the city, looking north as the shadows fall. 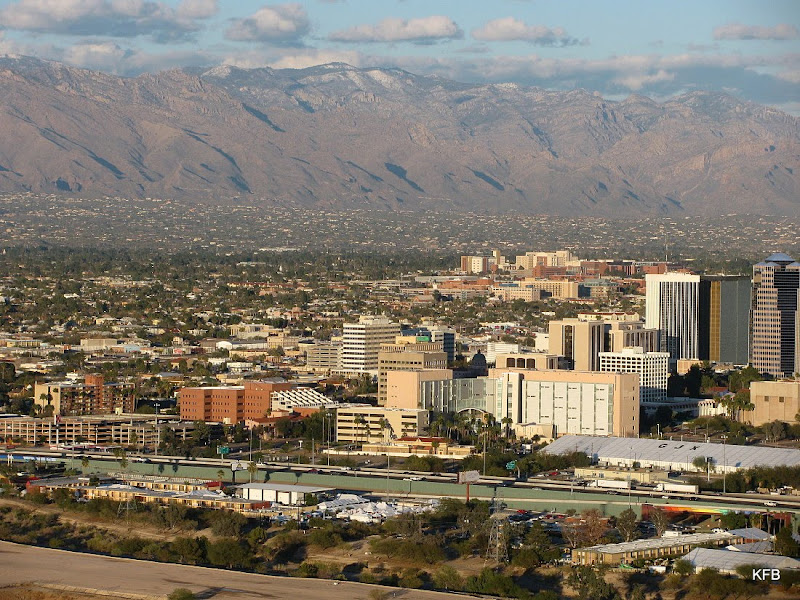 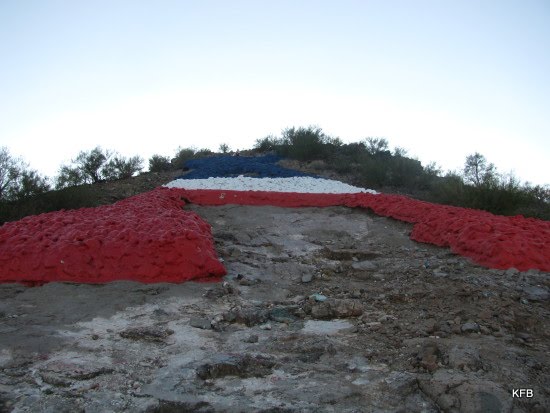 The reason it's also called "A" Mountain is this big painted A, honoring the University of Arizona. 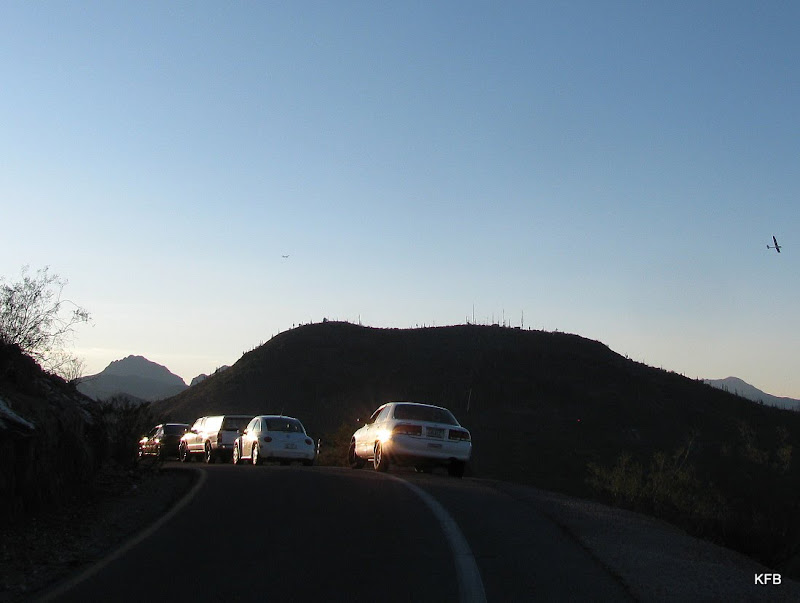 It's a very hairy drive up there, with no guard rails for most of it, bicycles and pedestrians about, and cars parked on what little shoulder there is between the car and a drop of hundreds of feet. Being a pedestrian with two dogs on leashes provided little more security than being behind the wheel of my Eagle Vision. 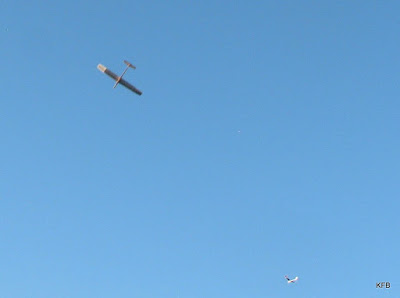 Some of the people were up there to fly model planes. One of these was custom-made, with a wingspan of five feet. 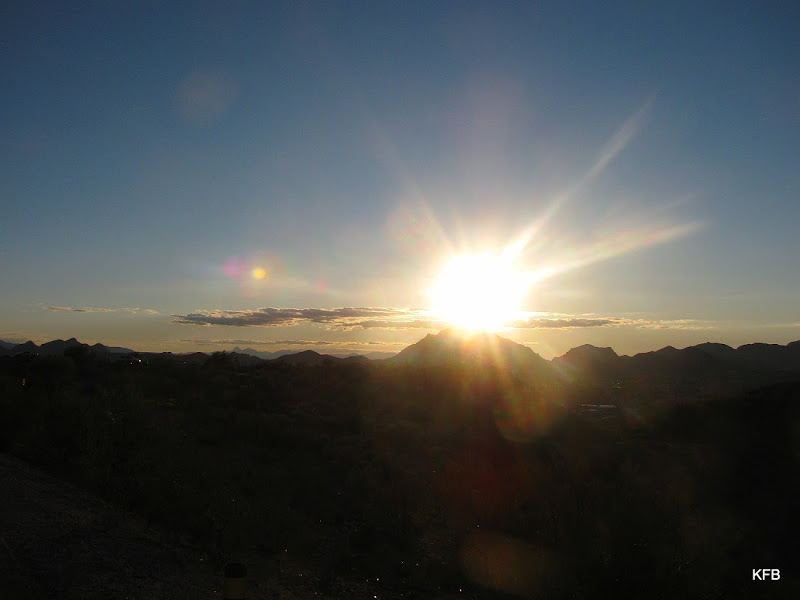 I was there with the dogs from just before sunset to shortly after. Then I had to rush home! But it was a  somewhat nervous walk I took with them along some of the narrow, one-way roads that spiral up and down Sentinel Peak and the adjoining mountain. At one point I had to scramble down a steep path through limestone rocks and desert scrub, camera and the two leashes in one hand. Well worth it, though. 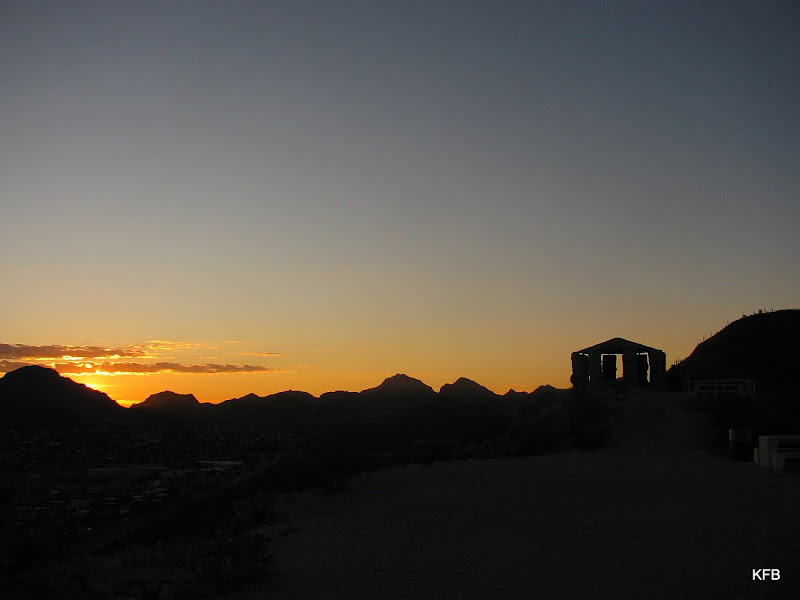 We did eventually get back to the car without the dogs falling off the mountainside. Then I drove around to the parking lot on the next peak over. The sun disappeared behind yet another peak in the time it took me to get out of the car. Before leaving, I took the dogs to this gazebo, where... 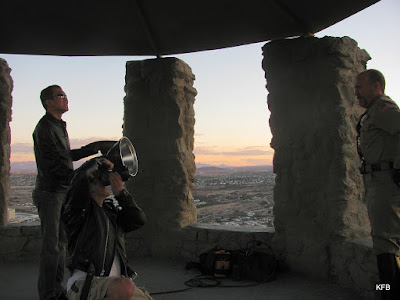 ...another  photo shoot was taking place. I never found out who the gentleman in uniform was, or whether he was a park ranger, Border Patrol agent or some other kind of government employee or serviceman. 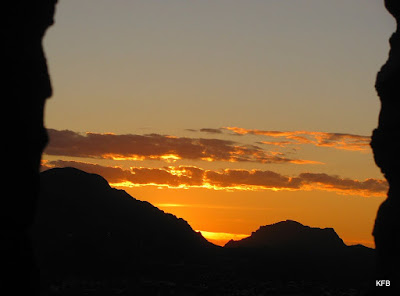 A view through the stone pillars of the gazebo. 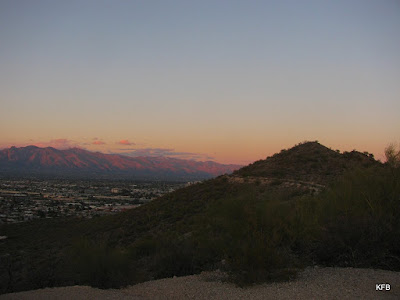 Beautiful mountains! Amazing sunsets! And yes, you can feel terrified and inspired at the same time. Two places in the Bay Area inspire those emotions in me... Devil's Slide on the San Mateo Co. coastline, and Grizzly Peak Blvd here in Berkely. :)

Cool! That gazebo looks like something from Stone hedge. :)

Very nice pictures! I wonder if that viewpoint isn't a favored parking spot for teenagers. ;-) The ride up and back after dark could be daunting, though. I agree with Mike -- the gazebo looks like it was made kind of after the order of Stonehenge. It sounds like you and the dogs had somewhat of an adventure!

Amazing view, especially during sunset! But the drive down in the darkness is a bit scary .?

What pleasant time that you have passed on that time. wish that you will get back it soon..